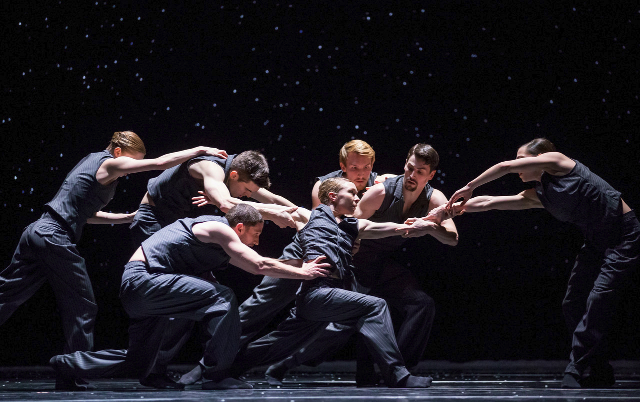 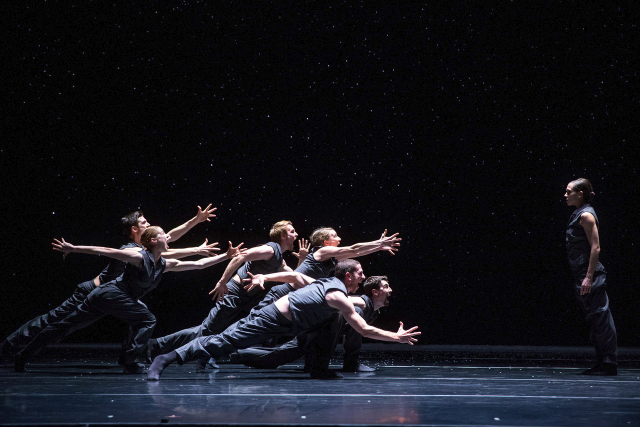 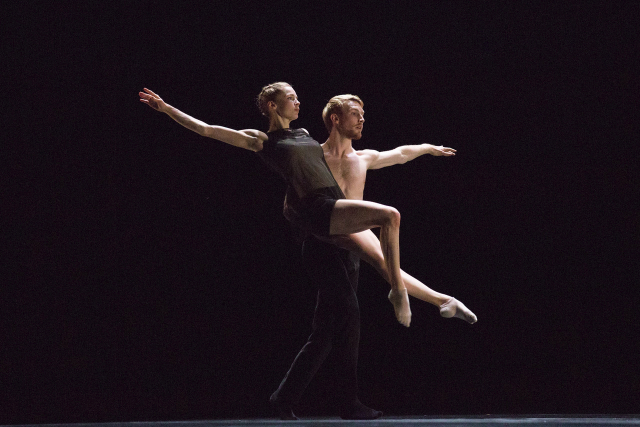 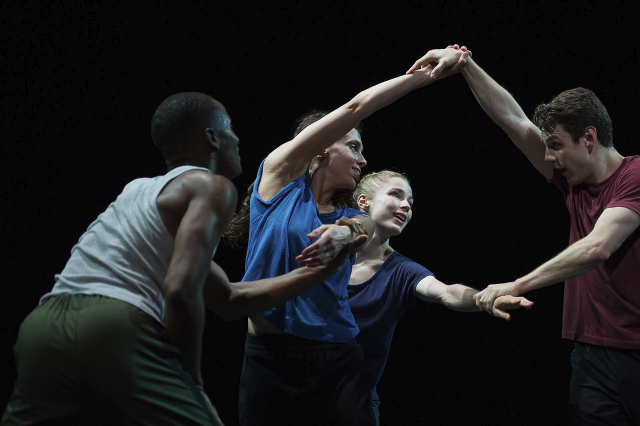 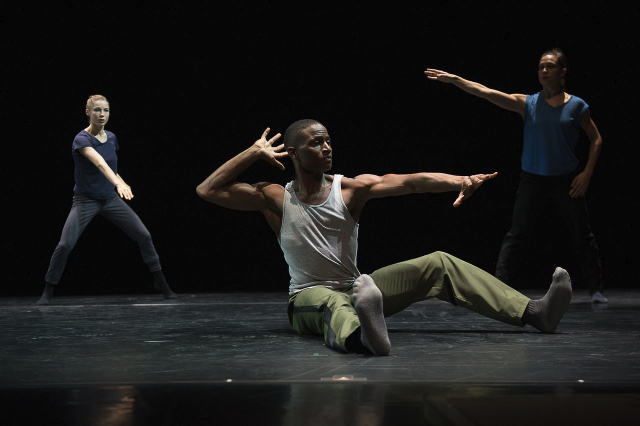 Now 35-years-old, the perennial favorites Hubbard Street Dance Chicago, has returned to Jacob’s Pillow for the 12th time to the delight and wonderment of a Berkshire audience.

In three segments with two intermissions the company presented  five, relatively brief, and different pieces that had a commonality of  challenge and experimentation. Taken as a whole the works defined the progressive mandate of a well established but ever evolving company.

Every season at Pillow presents an array of  established and emerging, American, European and global companies. We experience a range of aesthetic mandates some of which are defined by geography and ethnicity. There are companies that covey roots in traditional dance and ballet.

Then there are evening of ars gratia artis such as we experienced last night. Some works  encouraged narrative while others were avant-garde in the sense of against interpretation. One might regard that as experiences of pure dance or art for art’s sake. Which is not to encourage affirmation or denial. It is up to the audience to absorb the information of movement coming to their own conclusions.

Judging from audience reactions there was a confluence of respect, wonderment, confusion and perhaps even an aspect of apathy. There is the legitimate response of the average spectator of being puzzled by new works and concepts that reach beyond the comfort zone and wow factor of a viewer.

Perhaps a measure of this was enthusiastic applause but none of the pro forma standing ovations. They are so routine that critics discipline themselves from being influenced by ebb and flow of audience responses. Often the critic can be the only one in the audience who loves or hates a piece counter to mass ovations or deafening silence.

Of course it is wonderful and serendipitous when critic and audience are in sync with an experience. One must look ahead and that is why so often it becomes a bore to follow companies that the public adores but have become jaded, complacent and rather a bore. In the arts nothing succeeds like a lack of success. To be acclaimed and understood is anathema to creativity.

There is art and then there is Dolly Parton. With the caveat that the trouble is that, like much popular art, she is awesomely talented.

While all aspects of the program did not deeply thrill or motivate there is  enormous respect for a willingness to change and challenge the audience. Although the works ranged from 2002  to 2014 one sensed that we were glimpsing into a future for dance. It demanded accepting an expanded vision which, for now, feels fresh and motivating while occasioally enervating.

The good stuff is always complicated.

Perhaps a measure of the ambition of contemporary work is the resistance to acceptance. It takes time to settle in and with the best companies that never really happens.

I vividly recall, for example, seeing one of the final performances of the Merce Cunningham company at Pillow, on the weekend when he passed away. Even at the very end of his career the work was difficult, exciting and demanding of our patience and understanding.

Of course, by then, nobody would utter a word of protest as we were experiencing the last of an American icon.

By contrast Hubbard Street, which is not branded to a single vision, has the option to take on subsequent artistic directors who refresh the vision and direction for the company. What is interesting it that this occurs in Chicago not New York, Moscow, London or Paris. Amusingly, it forces us to reset the GPS of contemporary art.

Within minutes of the first piece N.N.N.N. the zeitgeist for the evening was established.

The music, credited to Thom Willems, was barely perceptible. It was a veil of sound that augmented punctuated breathing  including some comic guttural passages uttered by what proved to be a quartet of two men and two women.

But it was not about gender, duets, quartets or anything that accessible.

We first encountered a plainly attired woman, in t-shirt and pants. She was doing something with her arm as an ersatz robotic prosthesis. There were explorations of its swinging on a hinge/ elbow like the arms of a clock or mechanical apparatus. Hands and arms were flopped about in an expanding vocabulary of possibilities.

This close order drill of robotics was expanded with ever more complex variations as the four dancers pushed against, interacted, and responded to each other. With that accompaniment of utterances. There was a Newtonian sense of actions and reactions.

The discipline to execute this dance was evident and daunting. It is so demanding of rigid discipline and extensive rehearsal that it has rarely  been performed some fourteen years since its creation and premiere in Frankfurt am Main. Hubbard Street first performed in it 2015.

While there were emotional responses  between the dancers and sexes  probing for meaning is unproductive. The audience was invited to observe the exploration of possibilities and nothing beyond that.

There was a change when, with the second piece an excerpt from Second to Last, there was a series of pas de deux by five, seemingly seamless couples.

The music by Arvo Part evoked a reflection of classicism augmented by costumes that departed slightly with skirts for women, tights and bare chests for the men. One considered an evolution from Ballanchine.

In the subdued lighting it was imperceptible that the couples, slipping into the wings, were ever changing. There was always one couple on stage with the preceding one fading off to a side.

Because the dominant impact was the pas de deux one considered the conceit and artifice of having it performed by ten rather than just two, or arguably, four dancers. Since the movement didn’t change radically just what was the advantage of the multiplication of modular elements? Was this a case where more means more when less could have been more?

There was a shock element to A Picture of You Falling which was framed, for this viewer, by the horror of current events. This was further exacerbated by the harsh, grating, graphic and punctuated percussion of the music by Owen Belton. It sounded aggressive, brutal and punishing.

The very British, articulate voice of Kate Strong punctuated the dance with observations and instructions by the choreographer Owen Belton.

In a solo, it is also performed as a duet, Jason Hortin, responding to vocal cues, falls, collapses, awkwardly, all akimbo to the stage.  The creator may just mean falling but to me it felt like he was shot. That conflated with my disturbed mind set based on the catastrophe of shootings of blacks and cops in the news. Now with the latest terrorism in Nice.

One always brings something to the theatre. Sitting and watching a performance there is annoying head music that is difficult to tune out. In this instance it conflated with what I was seeing and perhaps led me to the wrong conclusion. But it worked, powerfully, as a metaphor for me. It was the most jolting and compelling aspect of the program for all the right and wrong reasons.

There are times when a creator channels something into the work which may or not be apparent at the time. The meaning and interpretation, or misinterpretation, maybe come later and is beyond the control of the artist.

When I was a teenager, for example, I enjoyed reading Moby Dick as an adventure story about whaling. When I got to college I was shocked to learn that it was about God.

So when it comes to A Picture of You Falling you may Call Me Ishmael.

The piece Waxing Moon has elements t.hat were engaging as well as not. It started well with a man on a chair exploring all possible variants of a simple prop. He was joined by another man and, initially using the chair, they explored attraction, separation, love, lust and estrangement.

Enter the woman and it devolved into a pas de trios with the woman coming between the lovers. My how things have changed at least in theatre if not in politics.

The final work, an ensemble piece, Solo Echo, was the most pleasing of the works. There was a feeling of winter and a backdrop, designed by Burke Brown, of softly falling snow. One wondered how that was done and then it was explained by seeing flakes gathering on stage.

There is a central male figure experiencing the stark, frigid beauty of a winter night in nature, under a canopy of stars but roiled by existential dilemma.

The closing lines of the poem project the mood and ambiance of the dance. “…tell yourself/ in that final flowing of cold through your limbs/ that you love what you are.”

The dancers interact with him and also form rows that extend his singular introspection. There are times when they grimace with a rare instance of facial expression beyond the usual generics of pain and joy  as a part of the dance.

It was the decision to end on narrative after beginning with abstraction that sent us home with some sense of humanistic peace and resolution.

In troubled times we needed that.