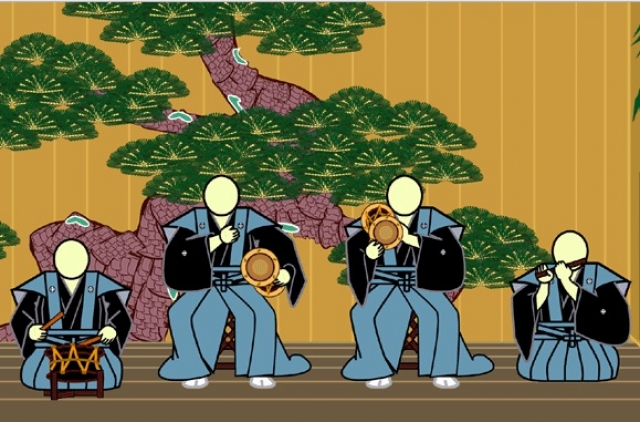 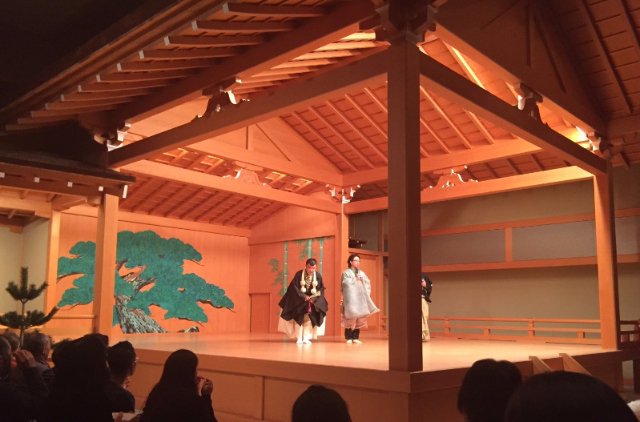 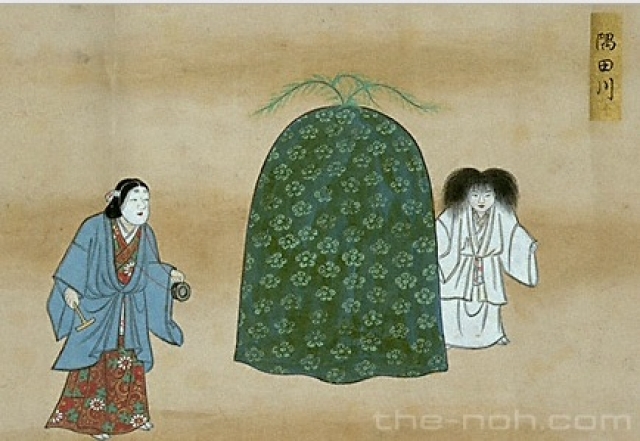 Grieving mother and the phantom of her child 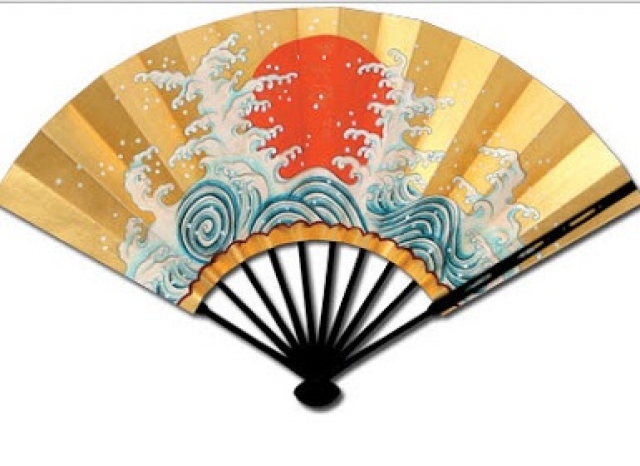 Everyone carries a fan 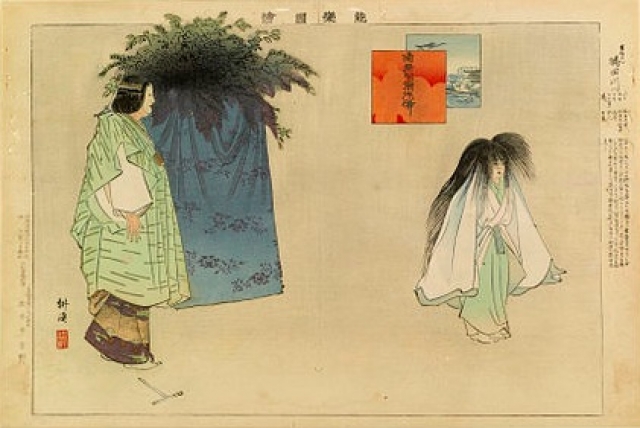 The phantom eludes his mother's grasp

For over six hundred years the Noh stage has always been set with a central pine tree, painted on the back wall or a frame's room. Lush thick green branches stretch out, ready to embrace musicians who  play at its feet.

A flute and drums accompany the drama and also call out its message, as drummers alternate beating their instrument with cries of yo, ho yoi, and, iya, sometimes alternating with the half beat of a slender stick.

Stage right has a curtain opening onto a bridge which is bounded by three pine trees in receding dimension. It is startlingly simple. Yet there is nothing simple about the dramas that unfold. Two hundred and forty of them form the core repertoire

Song and dance are the living tapestry of the drama. Each performance is unique because actors are trained and know what to do. They do no rehearse. Uncertainty inspires creativity.

The audience enters with lights up in the Rose Theatre. They will not be doused. Noh originated in open fields and lighting is not a part of this theatrical style.

Costumes, music, dance and symbols are its tools. Beautiful masks with wigs attached cover the faces of characters who exist in other-worldly dimensions or who are men playing women’s roles. Although modern Noh theater welcomes women, this Kanze troupe is all male.

In the slow, ceremonial pace of a Fisherman, Tsuneyoshio Mori does not give us a clue about the consequences of his picking up a glorious orange robe he finds. The Fisherman sings in a combination of intoned speech, melodic song and dynamic song.

Before The Fisherman can embark on his day’s work, an angel, Hisahiro Oka, appears to claim her robe.  She enters with equally slow panic, and begs for her robe’s return. She can not get back to heaven without it.

We might call this theatre opera, with the musicians on stage and a chorus in its traditional position stage left. They sing only intoned speech, and sometimes pick up a lead actor’s lines, if he is dancing or off stage. These choristers enter through a door which is so small they have to crouch to enter and exit. Sometimes characters step out of the center stage drama to sit with them.

The action takes place in front of the pine tree. The angel’s dance is as slow as the entrances and exits, but ends with the traditional flourishes of a fan.

Perhaps because we are not distanced from the stage by darkness in contrast to is light, we feel less separated from the drama, but instead very much part of it.

A full emotional range is suggested by the evening’s selection. The joyful generosity of the first piece, was followed by a vaudevillian take on a Persimmon Thief, a hungry priest who gets himself up into a tree to snitch persimmons.

As the owner of the tree approaches we’ve come to like the thief and worry that he will suffer consequences.  He pretends to be crow cackling, a monkey screeching and scratching. The priest and the persimmon tree owner are a duet, in this running gag, teasing, probing and playing with each other. A delightful duet it is.

The final play was the Sumida River, an achingly touching take on a mother’s loss of her child. From the beginning westerners will think of the Styx of Greek mythology. The center of the stage is a mound, draped with willow branches and white flowers. No one seems to notice this on stage, but we do. What is the mound?

Ophelia-like, Kiyokazu Kanze as the distraught mother, walks in, holding a willow branch to signify her madness. Her right sleeve is slipping off, also a sign of insanity.   The Ferryman asks her to explain madness, but she instead quotes classical poetry.

The Ferryman is ashamed that he has called her mad, and during the negotiations for her acceptance as a passenger crossing the Sumida, he discovers that he found her lost son and buried him. She drops her willow branch, cured of ‘insanity’ by the knowledge that her son has been found, even if he is dead.  The son emerges as a phantom, who eludes her grasp.

The telling of these tales on paper in no way can convey the pleasure of seeing them acted out, of hearing the choral chants, the half beat of the drum alternating with vocal cries and the textured singing of lead characters whose emotion is caught in the throat and then released.

This highly conventionalized form can be very moving. Sumida Grave shows how deep feeling is generated as drama follows a form's rigors.

Glorious white strings, like fireworks, erupt from the palms of performers as the evening concludes.