The Jungle Book at the Goodman Theater 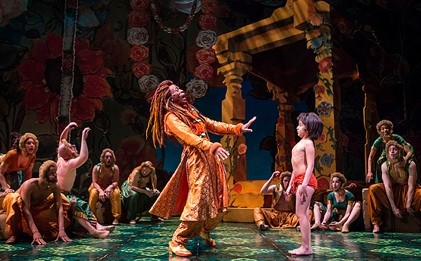 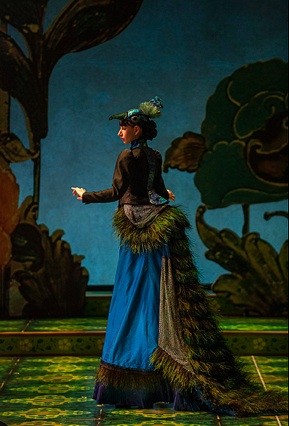 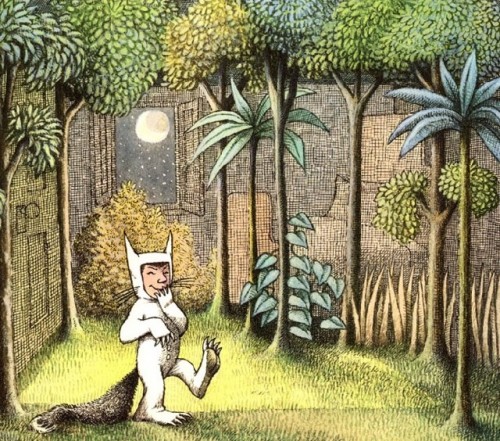 Maurice Sendak went into the jungle too. 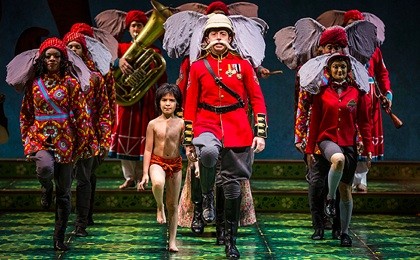 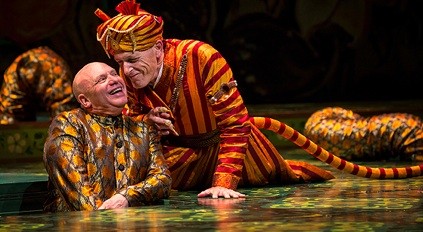 What does the snake's tail tell? 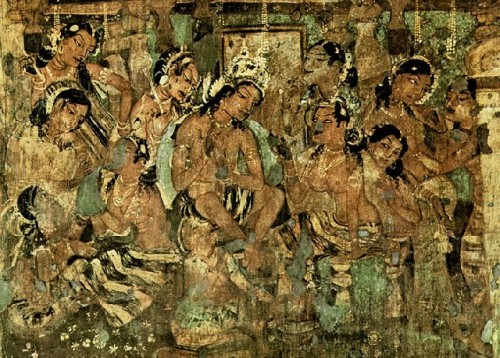 An illustration from the Jakata Tales which inspired Kipling

Produced by the Goodman Theater in association with the Huntington Theater Company by special arrangement with Disney Theatrical Productions.

Mary Zimmerman’s take on The Jungle Books, which is running at the Goodman Theater in Chicago prior to its arrival at the Huntington Theatre Company in Boston on September 6, is full of the color of India and its sounds.

It begins, like Peter Pan, in a comfortable home, which opens out into a world of fancy.  Nikki Graff Lanzarone on stilts takes a young child by the hand and leads him into a gargantuan world, perhaps more real than the one that surrounds him, tucked into a wing chair in his night shirt.

This Jungle Book, like Peter Pan, is about growing up, yet not wanting to grow up.  Mowgli, a ‘man cub’ whose parents were eaten by wolves, does not want to return to the human world.

Mowgli, the young hero of Kipling’s books, learns to do all of the above at the Goodman.  This makes him a confident explorer in the dangerous unknown, but drama created by awe and terror goes missing. Yet young Akash Chopra delightfully struts his stuff as Mowgli.

For a recent production of Janacek’s Cunning Vixen at Juilliard, a similar decision was made to let anthropomorphized animals be human.  In Jungle Book, the musical, the actors are men and women, not animals.  If Mowgli wishes to retain his wolf cub-ness, he's not getting lessons from his animal brethren. Kevin Carolan, marvellous as a dumpy cuddly, Pooh-like bear, does not even get bitten by the bees that surround his honeypot.

The rules of the forest, which Kipling thought he might have plagiarized from Southern Eskimo lore, don’t hit home.  Animals have left their primitive natures behind.  Floppy ears and outer garb suggesting the skin of an animal do not disguise their essential humanity.

The great choreographer Christopher Galletti creates movements and gestures that often succeed marvelously in conjuring up a butterfly, a deer and especially a panther.  Usman Ally, playing the panther Bagheera, creeps and glides.  His arm and leg gestures evoke a jungle predator.

Other beasts like the elephants are not as successful.  In colonial military garb, their big ears flop.  Two huge cut out elephants roll into the forest to make sure we can identify the elephants. Their leader, played by Ed Kross, belies the notion that an elephant never forgets as he eases into dementia.

The tiger, who threatens the young Mowgli, is not a figure of terror.  It may be that evoking terror was not on Zimmerman’s drawing board, but the feeling is necessary for the arc of a story that involves perilous adventure.

Andre De Shields clearly responds to Zimmerman’s working m.o.: She strives  to draft the play’s progression and then engages the actors to refine their roles and interactions.  De Shields one imagines just took over and made his role.  The monkeys he leads provide terrific chatter, climbing and grabbing bananas.  Of course, monkeys are also our closest animal relatives.

Like Ursula in the stage version of The Little Mermaid, De Shields as both Akela and King Louie camps it up.  Camp can successfully substitute for terror, but does not replace it.  De Shields heightens the humor and drama when he is onstage.  But few other moments are of similar intensity.

The big bold flowers and birds of the forest are beautiful to look at, but resemble William Morris wallpaper rather than an Indian painting.

The songs taken from the Disney movie are well done, but feel curiously out of place here.  Doug Peck, who has added Indian instrumentation, makes you wish for more of the tonal quality of the sitar and the carnatic violin’s whine.

The real problem is that Mowgli never seems threatened.  The panther’s constant warnings about the dangers of the forest conflict with Mowgli’s need, now that he is grown, to stay in the world of animals instead of putting childish things aside.

Rudyard Kipling spent seven years in England away from his parents in a home where he was beaten and abused.  He called it the house of desolation.  An early illustration for The Jungle Books is black and white and shows an open-jawed wolf with two bones beside him.  The two bones are Mowgli’s parents.  They are absent here.

The Disney people, who are credited with a special arrangement, had children and grownups weeping as they watched Beauty and the Beast, overwhelmed with the glory of the Lion King and riveted on the motherless Bambi’s fight with his Dad.  Disney, where are you now that we need you?

The Jungle Books are about growing up, our animal natures as well as our human ones, and the joy of story telling.  Children in Goodman audience were delighted by the visual and musical treats on stage.  Older audience members were a bit bored.  Only the dancers capture the spirit of the jungle and animals place in the world.  And they make the show soar.