The Greening of the Berkshires 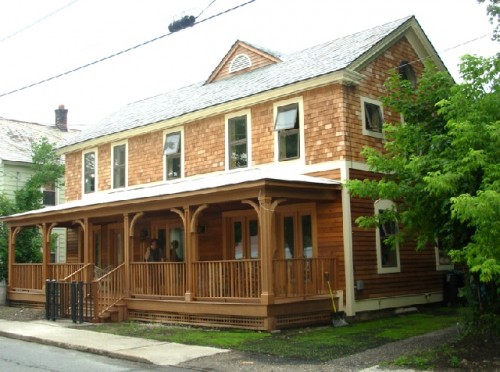 Two years of renovation have gone into what was originally an inn next to a railroad station. Giuliano photos. 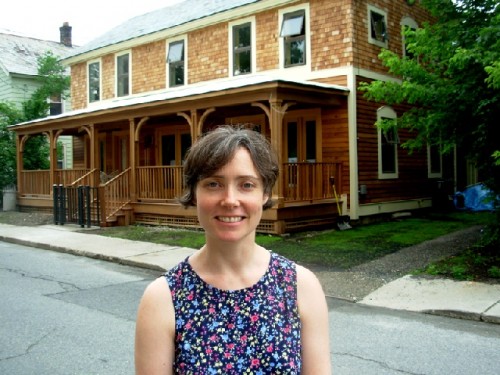 Caryn Heilman, a co-owner, standing before the Green venue. 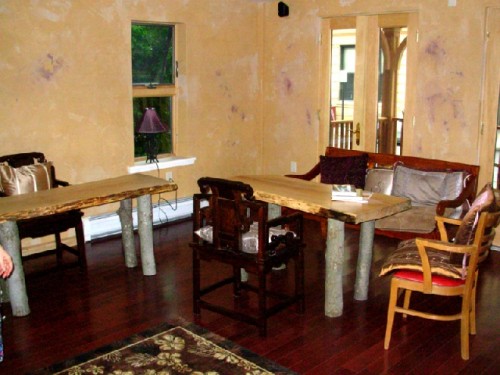 Breakfast is served in the visitor's room. 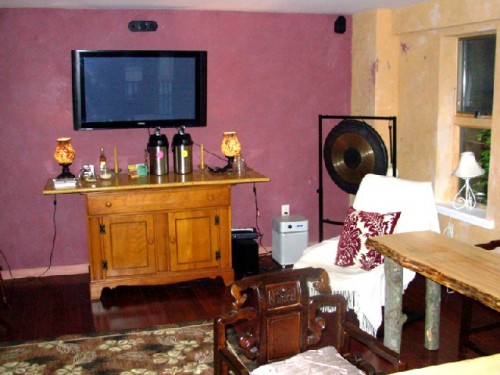 The sideboard in the visitors room has a top made of recycled glass in a concrete matrix. 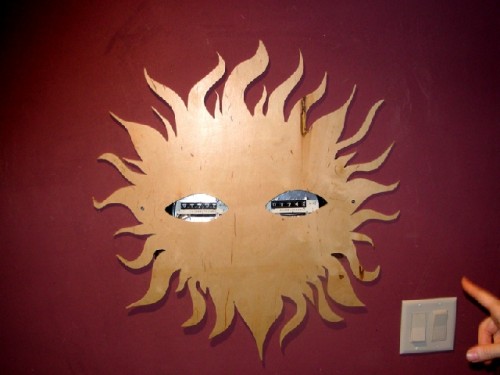 The sun records what has been generated by solar panels. 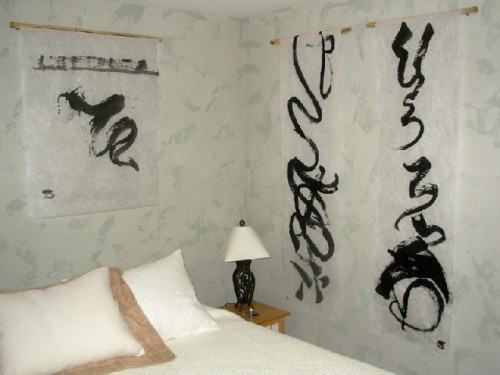 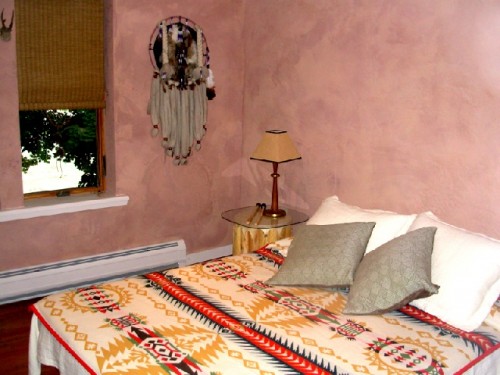 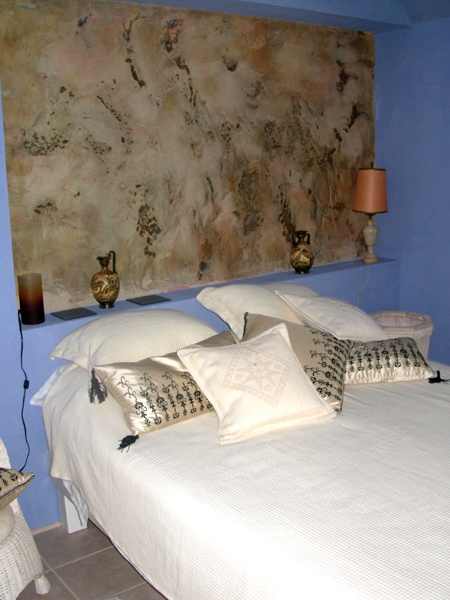 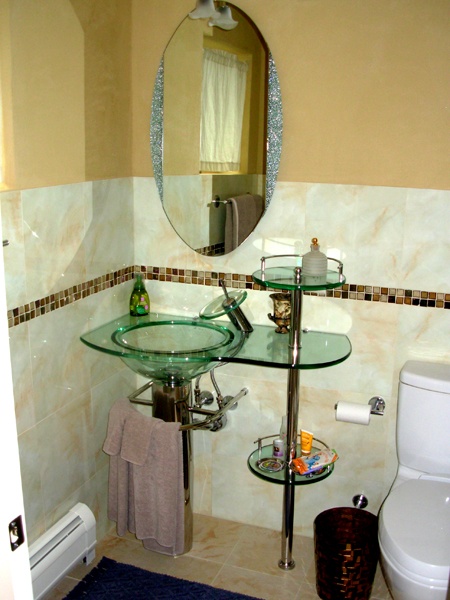 A typical vanity in the exquisite bathrooms.

The New York Times has filed a report on the unique Topia Inn in Adams, Mass. by Sara Rimer. On this occasion we offer another look at the piece by Astrid Hiemer when the inn opened some time ago. Link to New York Times coverage.

Massachusetts Governor Deval Patrick opened a lively and informative meeting for the Business Community on July 13 in Pittsfield, which was hosted by Julianne Boyd at the Great Barrington Stage and sponsored by Business Organizations and State Agencies. Under the banner "Discover the Berkshires, Where Nature Sets the Scene and Culture Steals the Show," cultural and business leaders were encouraged to speak at open mikes and the lines were long. The range of remarks, questions, and suggestions was wide for the Governor and his staff to follow up on and connections between people at the meeting were made on the spot.  What peaked our interest was the topic of several speakers about Berkshire projects with investments for ecological improvements with positive environmental, cultural, or business, and tourism goals.

A representative of Topia spoke at the meeting to that subject, and while we have watched from time to time by driving by the location, the progress of the inn from the outside, we were now extremely interested to investigate the property since it was now  open for business. Also, the Berkshire Visitors Bureau disclosed information that for 2005 the total economic impact of tourism in the Berkshires was nearly $ 500 Million.

We plan to report here and in future articles about projects, large and small, with an investment toward maintaining or improving the Berkshire environment and independence from 'the grid,' in short, so called 'green projects' and the TOPIA INN is such a place. It is a very exciting and inspiring property, which is located in North County, in Adams, Massachusetts. Caryn Heilman, one of the two owners, gave me a tour of the Bed & Breakfast, situated at the beginning of the Ashuwillticook Rail Trail, a cycling and walking trail, that starts  in downtown Adams at the Berkshire Visitors Center.

The inn, with its 10 rooms, is completely built and furnished organically and environmentally safe for the general public, willing to leave behind products, which could harm the inn's integrity  and chemically sensitive guests. Caryn herself suffered through intense and prolonged exposure to chemical fumes Â– without knowledge Â– and spent time at the Environmental Health Center Â– Dallas in Texas, where she also received much of the information and learned about techniques and companies, the inn used during the two years of construction until opening weekend on 7/7/07. Of course, so much more had to be researched during construction and workers, artisans, and artists on the project were trained or applied new materials and exquisite furnishings were chosen for the rooms and bathrooms.

I stepped into the inn Â– as requested left my shoes at the door - the ambiance and colors and first impressions were that of an earthy feel and Japanese style look. Indeed, the walls in the visitor's room and throughout the inn are finished in clay in three different modes. The first layer, the Loma Finish, is hard and rusty to the touch and some walls are left in Loma. Other walls received a second layer, the Porcelina Finish, silky smooth and lovely to the touch, and in a couple of bathrooms, I felt again a harder finish, the Maritimo, which is made of crushed oyster shells. The colors throughout the inn are in earthy shades from sandy tones and browns and greys to almost green and deep purplish-reds.

Caryn proudly pointed to the indicator panel of the almost 4000 kWh generated since last fall by the two solar panels on the roof with necessary technology, which are grid tied, and the inn only buys electricity in the evening, when more electricity is necessary. The Topia Inn's walls are insulated with recycled denim, under the roof Icynene Foam was applied, which lowers the building's temperature in the summer by 20 degrees and a natural convection ventilation system has been installed, so that air conditioning will hopefully be seldom necessary; it is available.

Wood throughout the inn is FSC certified (by the Forest Stewardship Council, from only sustainable forestry) and much came from the Massachusetts Woodlands Cooperative, a local supplier. The windows and appliances are Energy Star products. Bio-diesel (a vegetable base) equipment for heat and hot water, a highly efficient boiler, originated in Germany, was installed. Of course, rugs are made of organic wool, some commissioned, or bought from existing companies. Only organic linens are being used with silk blankets and comforters, the mattresses have a latex base with non chemical materials, or one may sleep on a non latex mattress, if one is latex sensitive.

The thought process that went into creating the Topia Inn was extensive, and the feel and look of the inn is simple, artistic, sophisticated, simply beautiful! I visited three rooms: a Japanese, the Zen room, a Native American (created by an artist with Iriquoix heritage), and a Greek room, all with shower or bathtub. I looked only - much to my regret I did not experience Â– the rain shower head with steam effect, and the vanity and stand, all glass, has a faucet that runs like a small water fall or rain water. What simple luxury!  The rooms' themes are indicated in a beautiful manner and understated.  For example, the Zen room is graced with four rice paper scrolls, each marked with symbol-like gestures in black ink and the small closet was also built by using rice paper on the outside. Again, all walls in the rooms and hallways were finished by one of the three aforementioned clay or earth techniques. The rooms are sufficiently small and we had the feeling of being in an older European Inn. It is, indeed, a 'saved' property, a former inn, which had seen its decline for as many years as the trains to New York and Boston had stopped running.

One may wonder about the price of a stay at this intimate inn, with breakfast in the morning,  and we found that the rates are in keeping with Berkshire rates and all pertinent information is mentioned below. The Topia Inn has become a show case for some of the participating firms' products, unique in building, application, and services, and only one of a few non toxic inns in the U.S., so that one may place orders at Topia's web site for certain products.  Did I mention the outdoor project, a Rain Garden, which is in the beginning stage or the small lawn, now being established with three native seeds, so that watering will become less of a need, and other remarkable details? They are there to be discovered!

Then, there is the Topia Arts Center, just a stone throw away on Park Street (Rt. 8), and a project in progress, which currently has the permit capacity for 100 in the audience. When open at its final stage it should hold 600. Music, performance, and educational events happen there and at the intimate Cafe Topia. (The Cafe is currently closed but will reopen by early fall 2007.) Caryn Heilman, Nana Simopoulos - the other owner - their board, and townspeople have great plans and vision for the Topia Arts Center in Adams, but that is another story.