An Ambitious but Flawed Production 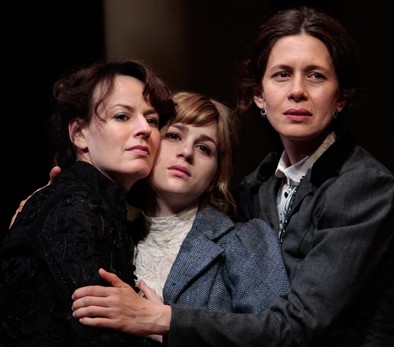 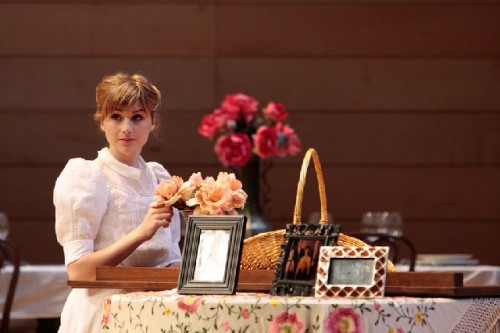 It is the birthday of the youngest sister Irina. 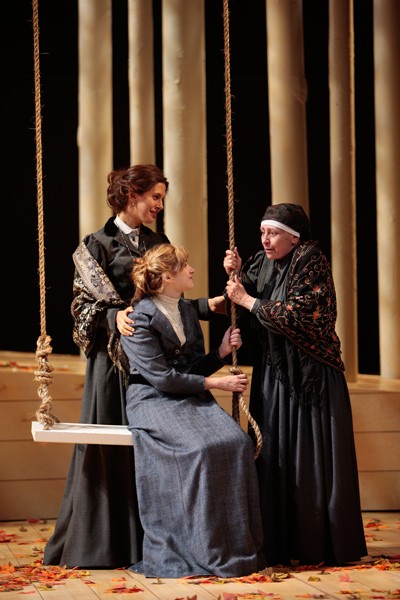 In the garden with the servant Anfisa (Roberta Maxwell). 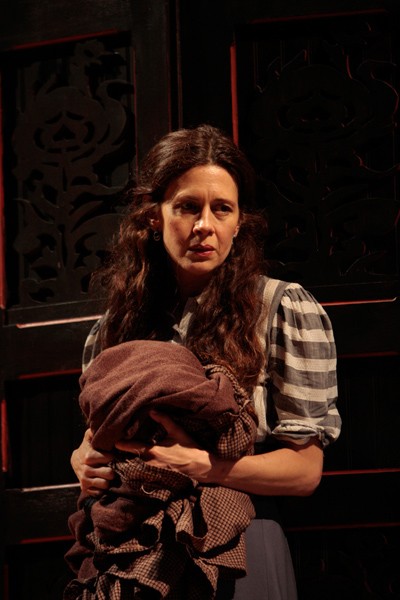 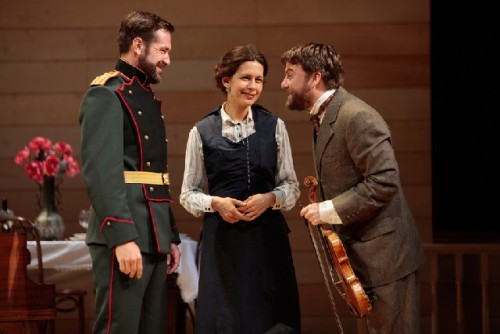 Olga is entertained by the officer Vasily (Stevie Ray Dallimore) and her brother Andrei (Manoel Feliciano). 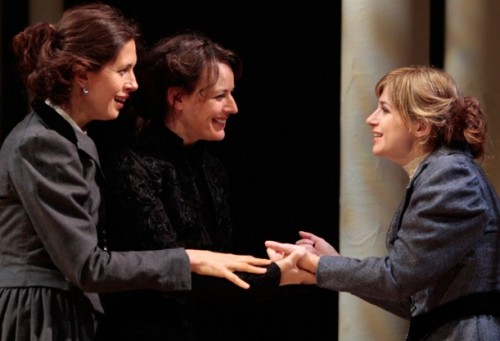 The opening scene of "Three Sisters" by Anton Chekhov at the Williamstown Theatre Festival, through July 27, was enchanting. There was a bright and festive mood as the stage was literally filled with colorfully attired players (costumes by Clint Ramos). The men were primarily garbed in Russian military uniforms while young girls wore virginal white dresses with pretty red sashes.

There was lively music and dance set in a forest of tall, abstracted, birch trees (sets by Allen Moyer) with dappled naturalistic lighting by Kenneth Posner. This was the prelude for Irina's (Aya Cash), the youngest of the three Prozorov sisters, birthday party. For the occasion she wore white even though the day coincided with the first anniversary of the death of their father. Their mother had died some time previously. The eldest, spinster sister Olga (Jessica Hecht) and the unhappily married Masha (Rosemarie DeWitt) remained in mourning. Their fortunes took a downward turn when he passed away leaving them stranded in a large house in a city of some 100,000. They longed to sell the house and return to Moscow.

The only distraction in this provincial city is a Regiment long stationed there. The women enjoy the company of the handsome officers who have been invited to the birthday celebration.

With this lively and charming beginning, particularly the music composed by Michael Friedman, we settled back to enjoy a wonderful two hours and forty five minutes of a great Chekhov play. He passed away at 44 from complications of tuberculosis in 1904. His plays convey the last days of the Old Russia with premonitions of the Revolution which started in Odessa briefly, the year after his death, and again in 1917 when the Bolsheviks came to power.

But the upbeat mood changed abruptly in the next scene set in the living quarters of the Prozorov home. Stage hands attired as soldiers pushed out a flat, wood paneled wall. Above it and beyond were the birch trees which, with the change of lighting, now were revealed as distracting, long white tubes. Against the wall was a long dining table while the living area was designated by a grand piano in the foreground and a couch set at a right angle to the audience which obscured dialogue. There seemed an uneasy juxtaposition between the realism of Chekhov, the heavy, dark period furniture (particularly in contrast to the light wood panneled wall) and costumes, juxtaposed with the stark ersatz modernism of the set. It was our first hint that something was not right about this production.

It is appropriate to rethink a classic and give it a more contemporary production but everything about this version of the play seemed mid way between late 19th century realism, modernism, and ersatz post modernism. This hybrid of an overly vernacular text by Paul Schmidt, anachronistic sets by Allen Moyer, and most significantly, the direction of Michael Greif, was so disjunctive that everything conspired against the poignant poetry and melancholy of Chekhov.

If anything, the attempts by Greif to contemporize Chekhov did not go far enough. Consider, for example, the brilliant, 1994 film, by Louis Malle "Vanya on 42nd Street" which is about a group of actors rehearsing the play. It was a wonderful means of rethinking a great work. Or, dare we say it, this production made us long for an American Repertory Theatre (ART) full blown deconstruction. While Greif's direction left us uneasily twixt and tween.

Occasionally, for example, the disgruntled Masha would utter something rather angry and vulgar in modern language which was entirely out of sync with the period of 19th century Russia. It just pulled us up short.

There was too much wrong about the casting and direction. Baron Tuzenbach (Keith Nobbs), for example, was too physically small compared to his swaggering, macho, fellow officers. His diminutive physical stature became a sight gag for a lack of manliness. It rendered his philosophic and aesthetic views as absurdly unrealistic. In pining for Irina he expresses that the aristocracy needs to do honest work. He was, of course, absolutely correct but nobody listened. By playing him as a dreamer and weakling his final demise is all too predictable and thereby lacking in dramatic tension. Played differently the Baron has the potential to convey a signifier of change on a par with Pierre the philosopher and reformer in Tolstoy's "War and Peace."

The character of Fyodor Ilyich Kulygin (Jonathan Fried) the school teacher husband of seven years of Masha was a disaster. He is played so absurdly with such nonsensical mannerisms that it is never credible that she would have been foolish enough to marry him. We almost beg her to run off with the handsome, unhappily married, Lieutenant Colonel Aleksandr Ignatyevich Vershinin (Stevie Ray Dallimore). Again, by directing her husband as such a dolt, there is no tension in her inevitable infidelity. For Chekhov, writing in 1900, this may have been daring realism, but it is the norm today. There is no resonance or credibility in the shock of Olga on hearing the confession of her sister's infidelity.

The daring realism of 1900 is less jolting in 2008. So the dilemma is to treat the drama as either a period piece or give it a fresh overhaul. The primary theme is the bonding of the sisters who are at the mercy of their foolish brother, Andrei. In the first act, he aspired to study science and become a professor. By the second act he is a small town bureaucrat. A nobody.  He has mortgaged the home to pay some 35,000 rubles in gambling debts. The sisters are forced to deal with the reversal of their sister in law, Natasha (Cassie Beck), who they initially ridiculed, and now has power over them. In a strident confrontation Natasha screams at Olga that she intends to fire the old servant Anfisa (wonderfully played by Roberta Maxwell). The fact that she has been with the family for 30 years means nothing to the shrewish sister in law.

Of course "Three Sisters" is about aspects of love. The spinster Olga, who has never known love, confesses that she would have married any man who asked her. Masha, did just that and is now miserable. While the idealistic and romantic Irina longs to go to Moscow and find her true love. Irina is willing to marry the Baron, for whom she has no love, because he adores her. He is potentially a good provider. Irina is also pursued by but rejects the smarmy bastard Captain Vasily Solyony (Stephen Kunken). It was the fate of women at that time to seek marriage for better or worse.

Set against the aspects of romance by the women is the theme of the folly of men. They also have delusions of love but confused by excess testosterone. In the case of  Dr. Ivan Romanovitch Chebutykin (nicely played by Michael Cristofer), who had loved the mother of the sisters, he drowns his disappointment in demon drink.

All of which makes one wonder just how to present Chekhov? There is much power and poetry in his four best plays but for contemporary audiences they are clearly problematic. They are long, wordy, complex, and demanding dramas. Their focus on the fading Russian aristocracy and romance belong to a bygone era. Chekhov was so specific to his time, with his then new realism, that it is challenging to recover the sense of urgency.

Perhaps the next generation will achieve enough distance to play Chekhov straight as theatrical nostalgia. Trying to poke and tweak "Three Sisters" into a contemporary rendering, in this case, just didn't work. Let us not assume that it cannot be done. The play's the thing.