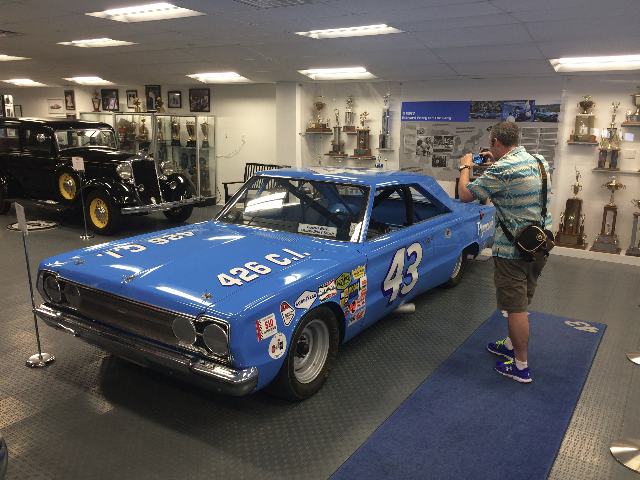 NORTH CAROLINA, STOCK CARS AND THE KING: THE RICHARD PETTY MUSEUM TELLS OF A RACING LEGEND.

Petty Blue. The signature color of one of the best-known figures in motorsports. Richard Lee Petty (born July 2, 1937), nicknamed The King, won the NASCAR Championship seven times and won a record 200 races during his career, including the Daytona 500 a record seven times. He was inducted into the inaugural class of the NASCAR Hall of Fame in 2010. Petty’s father, Lee Petty, won the first Daytona 500 in 1959 and was also a three-time NASCAR champion.

His son Kyle is also a well-known NASCAR driver. The family resides in Petty's hometown of Level Cross, North Carolina, where it operates Richard Petty Motorsports. In nearby Randleman, mementos of lives lived in the fast lane are on display at The Richard Petty Museum, a complex of low-slung buildings that preserves the heritage of a man and a family who have had an immeasurable influence on American motorsports.

Dozens of Petty-related vehicles are set indoors surrounded by hundreds of race trophies and cases of memorabilia covering decades of Petty family history.  A separate room holds fascinating pieces from Richard Petty’s rifle and gun collection, each weapon intricately decorated and identified as “number 43” of a limited edition issue.

NUMBER 43 IN FACT AND FICTION.

The star attraction of The Richard Petty Museum is “Number 43,” the “Petty Blue” 1967 Plymouth that was his winningest car. The car is so well known that it served as the model (complete with the distinctive "Petty Blue" tint and the number 43) for Strip Weathers, a "Dinoco-blue" veteran racecar also known as The King, in the 2006 Disney/Pixar animated movie Cars. Strip Weather’s voice was provided by Petty himself. Also on display at the Petty Museum is the Petty family station wagon, which appears in Cars as a 1976 Chrysler Town & Country station wagon.

From its fabled origins in the seemingly “stock” but actually high-powered cars that ran moonshine along winding dirt roads through southern mountains, The National Association for Stock Car Auto Racing (NASCAR) has become a major business that sanctions over 1,500 races at over 100 tracks in 39 of the 50 US states as well as in Canada. While NASCAR has its official headquarters in Daytona Beach, Florida, it remembers its roots with several offices in North Carolina, where the majority of NASCAR teams are based as well.

I climb behind the steering wheel...I drive off immediately without once looking back; it's a long journey but it leads to freedom. Corinne Hofmann, The White Masai.