A Hit for Shakespeare & Company 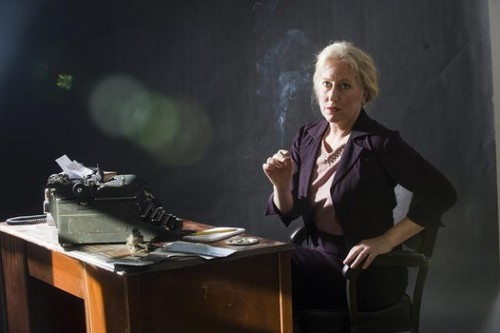 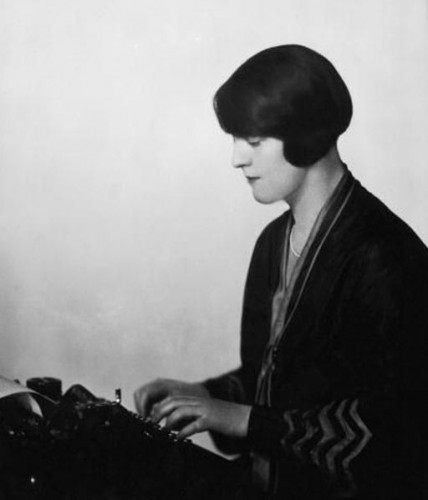 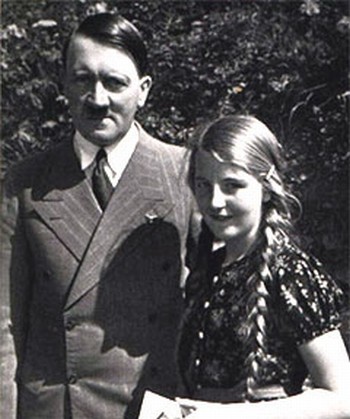 Hitler with his half niece Geli who lived with him for several years. 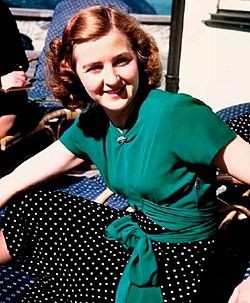 Geli had an affair with Hitler’s chauffeur. 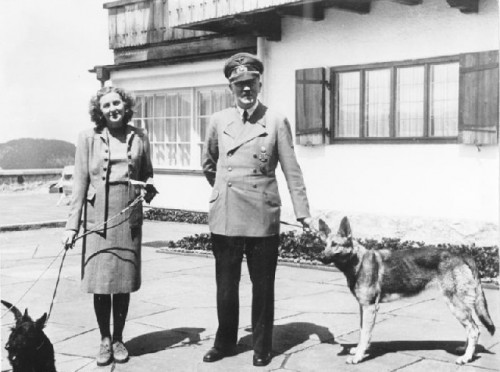 Hilter with his mistress Eva Braun who he married shortly before they committed suicide. 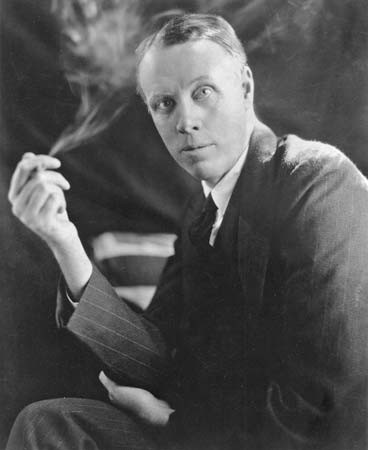 When Dorothy Thompson (9 July 1893, Lancaster, New York – January 30, 1961, Lisbon, Portugal) met and interviewed Adolf Hitler in 1931 she wrote "He is formless, almost faceless, a man whose countenance is a caricature, a man whose framework seems cartilaginous, without bones. He is inconsequent and voluble, ill poised and insecure. He is the very prototype of the little man."

In 1925, she was promoted to Chief of the Central European Service for the Public Ledger (Philadelphia). She resigned in 1927 and not long after, the New York Post appointed her head of its Berlin bureau in Germany. She was regarded as “the undisputed queen of the overseas press corps, the first woman to head a foreign news bureau of any importance.”

Having become fluent in German she read Hitler’s book Mein Kampf in which he laid out in detail plans for European expansion and the annihilation of Jews. Hitler composed the book while in prison before National Socialism came to power in 1933.  The book was the Bible of Nazi philosophy and while it was widely cited few, including most Germans, actually read it. Beyond Germany nobody bothered. Thompson did and took him on his word even though she dismissed him as “The Little Man.” I have read Mein Kampf as well as other primary sources of WWII and it is indeed difficult to get through.

Not just for its turgid prose but for the venom that spews from every page. If only world leaders had taken the trouble.

Thompson’s dispatches from Berlin were translated and read by the Gestapo but they largely fell on deaf ears in America. Prior to the attack on Pearl Harbor, December 7, 1941, which led Roosevelt to ask for a declaration of war, America was reluctant to be drawn into another global conflict. Although Roosevelt, Congress and the Military were informed of the fate of Jews, a point that Thompson made repeatedly, nothing was done to intervene in the Holocaust.

Because of her repeated warnings Thompson earned a reputation as a Cassandra.

In Greek mythology Cassandra was the daughter of King Priam and Queen Hecuba of Troy. Apollo granted her the gift of prophecy. She spent a night at Apollo's temple where temple snakes licked her ears clean so that she was able to hear the future .When she did not return Apollo’s love he cursed her so that no one would ever believe her predictions.

In 1934 Thompson was deemed such a threat that she was expelled from Germany. By then, Hitler had consolidated the power of National Socialism.

Because of her syndicated newspaper columns and radio broadcasts, in 1939, she was recognized by Time magazine as the second most influential woman in America next to Eleanor Roosevelt.

Norman Plotkin (1943-2010) wrote Cassandra Speaks specifically for Tod Randolph. It is currently running in a critically acclaimed production in repertory through September 2. We were out of town for the opening and saw it last night, a Wednesday, with a near to sold out audience.

We encounter Thompson in the study of the Vermont home (effectively designed by Patrick Brennan and lit by Stephen Ball) she bought with her second husband, the renowned author and drunk, Sinclair Lewis, or Hal as she calls him. It is 1943 and she is writing a column while taking constant calls from an unseen assistant.

Looking out at the audience we are invited guests. She has to finish her piece, it’s noon, in time for a wedding that afternoon to her third husband. She was married to the writer and correspondent Josef Bard from 1922 to 1927 and to Sinclair Lewis from 1928 to 1942. They had a son Michael. Thompson married the artist Maxim Kopf who died in 1958.

The performance by Randolph conveys many aspects of Thompson’s character. There is that uniquely gifted writer and successful career woman. She can be arch and imperious during endless interruptions on the phone (an overworked device of a one woman play). Then melt into a womanly puddle of affection when talking with Kopf, about whom she has misgivings, or her ex Hal who, as usual, is drunk and abusive.

Of course we want to know about Hitler and the inner circle of the Reich which she navigated as they rose to power. What we learn about Der Fuehrer, however, is more boiler plate and dismissive gossip than stunning insight. She reveals that he had one testicle which is a well known fact. She mines it derisively describing his ‘one ball.’

She also relates the sordid tale of Hitler’s alleged sexual involvement with his niece which resulted in her suicide/ murder. Angela Maria "Geli" Raubal (4 June 1908 – 18 September 1931) was Hitler's half-niece. He discovered that she was having an affair with his chauffeur Emil Maurice who was dismissed. She was kept under close wraps but planned to escape to pursue singing lessons. On the fatal day they argued and she was found shot, with Hitler’s pistol, through the chest.

While the death was ruled a suicide Thompson dismisses that notion. She contends that Geli experienced Hitler’s sexual perversion which she threatened to reveal. Also the means of death was highly unlikely for a young woman.

Only in the final days in the Bunker in Berlin did Hitler marry his long time mistress Eva Braun. They committed suicide shortly after the ceremony. It is known that the SS shot secret film of Hitler and Braun engaging in unconventional sex. The film was kept as potential blackmail or evidence in the event of a coup to discredit him to the German people.

This Nazi gossip and rehash underscores what I found problematic about the production. While it created a fascinating and complex portrait of Thompson there were few, if any, unique revelations. In back story we find that Lewis, while brilliant, was a colossal failure as a husband and lover. So, what else is new?

She did indeed have her finger on the pulse of tactical developments. In addition to her Cassandra hectoring about the threat of Nazi Germany Thompson reveals that Pearl Harbor was not a surprise. When negotiations with the Japanese broke down she informs us that she told Roosevelt to anticipate an attack. Again, this is not unique information. It is widely conjectured that the President was informed but opted to ignore the impending hostilities. Recall that Americans were reluctant to go to war. Pearl Harbor gave Roosevelt unprecedented power as a President during a declared war. Consider that the U.S. never ‘declared war’ on Korea, Vietnam, Iraq or Afghanistan.

It is also now known that the Japanese code, which conveyed orders to diplomats in Washington, had been deciphered. Those decoded dispatches were never delivered although an American officer spent the night before Pearl Harbor knocking on doors.

The Japanese never knew their codes were broken. Intercepted messages allowed US fighter pilots to shoot down the supreme naval commander Admiral Yamamoto as well as win the decisive Battle of Midway.

Thompson is presented as a somewhat dowdy woman of fifty in what she tells us is a pretty frock (by Kara D. Midlam).  I found the costume rather matronly and unflattering. It was indeed consistent to the period. The era of WWII was not notable for chic fashion. But here she resembles Eleanor Roosevelt a tad too much. I would have preferred to see more of a resemblance to Katherine Hepburn who portrayed an ersatz Thompson in the 1942 film Woman of the Year. On Broadway it was produced as a musical with Lauren Bacall. Those women were glamorous where Randolph plays her as frumpy.

During her remarkable career Thompson was an eye witness and primary source for some of the great moments in 20th century history. In addition to Berlin she was also assigned to cover the 10th anniversary of the Bolshevik Revolution in Moscow (1927). Through her voice as a journalist she worked for refugee relief. When the State of Israel emerged she raised unpopular questions about the fate of displaced Palestinians.

From covering war and global politics in her later years Thompson dispensed wisdom on gardening and child rearing for the Ladies’s Home Journal. In the 1943 Vermont setting Randolph spoofed that by laughing and twirling around in her frock. But, after fireworks as a war correspondent, and years with the tough to handle but brilliant Lewis, she did indeed slide into domesticity.

Consider, it’s 1943, the war is raging and Thompson was reporting from Vermont? What about that just doesn’t make sense? No wonder she was riddled with doubt on her wedding day.

Which reflects my misgivings about this portrayal of one of the renowned journalists of her era. Thanks Ms. Randolph but, as they used to say in that TV show What’s My Line (1950-1967), “Will the real Dorothy Thompson please stand up.”