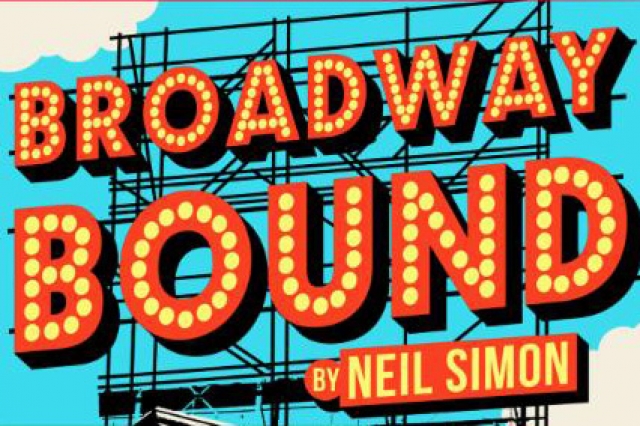 MARGATE, Fla. -- What state of mind would we find ourselves in today’s world without the comforts of humor and family? To be blunt: We’d buckle under the weight of all the uncertainty and danger that has just added to the fragility of life.

If Neil Simon were working on a play based on current events, the playwright would no doubt be able to dig up the comedy amid the rubble of the shambles many feel the world is coming to.

For decades, Simon has displayed a gift for unearthing humor in dark situations and finding the recognizable humanity beneath the foibles and faults of his characters.

Simon, long among our most prolific, successful and popular playwrights, does so particularly well in his semi-autobiographical trilogy. It’s comprised of “Brighton Beach Memoirs” (written in 1983), “Biloxi Blues (1985) and “Broadway Bound” (1986).

The latter is being given a production with mixed results by Stage Door Theatre near Ft. Lauderdale through Aug. 14.

Call the production a tale of two acts. During the first, lines sound rushed and responses come too quickly. The performers aren’t fully inhabiting their characters, but rather anticipating their lines. The second act is the complete opposite; pauses “say” more than words can, there’s much more nuance in the acting and plenty of telling facial expressions.

During the latter act, the actors disappear into their characters, living in 1949 Brighton Beach, Brooklyn, N.Y. It’s there that we met the Jerome family, last seen together in the trilogy’s first play, set in the late 1930s in the same neighborhood.

Eugene Morris Jerome, then 15-years-old, is basically a young Simon. At the time, Eugene was witty, perceptive, hyper, imaginative and ambitious. His dreams were to play for the New York Yankees and to become a writer.

Now, in “Broadway Bound,” following his stint in basic training for World War II in “Biloxi Blues,” Eugene has given up, or doesn’t talk about, his ball-playing dreams. The now 23-year-old Eugene and his 28-year-old brother, Stanley, are diving full-force into the sketch comedy business in the Broadway district of New York City. While they incur bumps along the road, the brothers’ life situation looks bright while the older adults in their lives are in a downward spiral.

For most of the deftly-structured play, it seems as though two storylines are playing out. One involves the Jerome brothers’ efforts to write the perfect comedy sketch that will land them on television. That’s a big deal; their father, Jack, states later in the play that only 10 people in the U.S. had televisions at the time. The Jerome siblings, especially Stanley, badly want to become successful comedy writers.

The second strand involves the troubles of the older adults in the Jerome household. The boys’ mother, Kate, is 50, a middle-aged housewife whose marriage to Jack is crumbling before our eyes. She doesn’t seem to know what to do with her life at this point. As her father, Ben, says, if she can’t fix a meal for somebody, she feels useless. Kate’s life has revolved around raising a family. But her “boys” are grown, her marriage of 33 years to Jack is about to end and her father, Ben, has left his wife, who has moved to Miami alone.

“I can’t live her kind of life, she knows that,” Ben explains to Kate, when she claims her mother feels Ben hates him.

Ben, an unapologetic socialist, has trouble living with anybody who is rich.

“You’re angry with me because I won’t live in your high-class apartment house where a year’s rent could feed everyone on this block for a year?” he asks his rich daughter, Blanche.

Blanche is a widow who remarried a man who became wealthy. She wears a mink coat and there’s extreme tension between she and her father when they’re together.

In contrast to Blanche and her second husband, Kate and Jack aren’t nearly as wealthy. Jack’s a cutter of women’s raincoats and works long and hard hours to make ends meet.

Even with all the family’s problems, Simon finds copious amounts of humor (he’s well-known for his signature one-liners).

But when the storylines of the older and young adults clash, humor is hardly the mood in the Jerome household.

Simon, as he’s done in “Brighton Beach Memoirs” and in his 1991 Pulitzer Prize winning play “Lost in Yonkers,” delivers a potent combination of comedy and drama to paint a heartbreaking, humorous, heartfelt and very human portrait of a recognizable family experiencing life’s pains and joys.

You recognize the characters immediately, perhaps from your own family. You fall in love with the characters by the play’s end, wish to cling to them and refuse to let go. This is true to a lesser extent with “Biloxi Blues,” which still manages to endear us to Eugene (the only member of the Jerome clan in the play) who wryly and perceptively observes the other young men in his company and records his experiences in his memoirs. Eugene’s torn between defending a fellow Jew and soldier, Arnold Epstein, from ridicule and keeping quiet.

“Biloxi Blues” is not quite as rich a work as “Brighton Beach Memoirs,” “Broadway Bound” and “Lost in Yonkers.” The latter’s an immensely touching and funny show about how children can end up later in life when nobody loved them as youngsters.

The loving bonds between the Jerome brothers as well as Eugene and his mother in “Broadway Bound” are obvious.

You’ll be hard pressed to find a more touching scene than one in the Stage Door Theatre production. It involves Eugene and his mom, an intimate moment that provides relief from the heated, tense scenes that came before. The scene illustrates how little we sometimes know about the people who are closest to us—even those who made us. We’re surprised to uncover a part of these people that we never saw. In this case, Eugene finds his mother harbors a vivid, fond recollection of her past that involved the one time she danced with George Raft, an American film actor and dancer of the 30s and 40s.

A captivated Eugene (an excellent Kristian Bikic) asks his mother to re-enact the dance and pretends he’s Raft.

As portrayed by Bikic and Pamela Roza as Kate, the scene is heart-melting. Grandmothers in the audience have likely wanted to pinch Bikic’s cheeks after watching the boyish, sweet, charming and vivacious Bikic suavely slick down his hair, pretending to be Raft and asking his mother to dance with her.

Roza dances gracefully and is a delight in the role. She speaks of her past, which included some youthful indiscretions, with such a vivid familiarity, you feel as though she’s looking over the audience and seeing her youth play out. Roza gestures with her hands as though she’s painting a portrait of the memory so it won’t be lost.

But, as Kate points out, that happened 35 years before the play’s setting.

After a slow start, Roza makes Kate come to life in all her colors, convincingly capturing the character’s anger, unassuming nature and the doting and meddling mother. When Roza’s Kate smiles with pride and hugs her sons, there’s little doubt this woman loves them and is first and foremost devoted to her family.

During a palpably uncomfortable, tense scene with Jack, Roza vividly captures Kate’s anger, jealousy, hurt and exasperation at her husband, who’s had an ongoing affair with another woman. Roza lowers her voice, in pitch and volume, speaks and out comes long pent-up feelings of bitterness toward the man who has betrayed her. Her voice isn’t loud, but it doesn’t have to be. Those raw feelings given voice in quieter tones take on a more hostile flavor than if Kate were screaming at the top of her lungs.

It’s easy to hate Jack for his infidelity, but Peter Librach captures the quiet guilt and shame Jack feels about what he’s done. His Jack is a weary, lost man experiencing a mid-life crisis. He may well love Kate, but he’s looking for something more in his life, which he’s spent as a cutter of clothing. Now he doesn’t even have children to raise any longer. Librach is a flawed, common man; you can easily envision him in an Arthur Miller play.

Librach doesn’t allow us to hate Jack, even as he berates his sons for humiliating him, his friends and family on the radio comedy sketch they wrote.

There’s irony in this play; here’s a man who’s faulting his children for humiliating him, but hasn’t he hurt them and his mother by carrying on with another woman? Jack may be a hypocrite and a liar (he denies, for a time, having the affair), but in the end, it becomes obvious he’s a family man—as hard as that is to believe.

Michael H. Small, who plays Ben, makes him perhaps the most recognizable character of the bunch. He sports a long grey beard and wears a black hat, bringing to mind perhaps Tevye or Lazar Wolf from “Fiddler on the Roof.”

Small’s Ben is the quintessential, perhaps even a bit too stereotypical Jewish father/grandfather. His eyebrows lower and furrows form on his forehead when Ben is deep in thought or confused about something. He speaks in a loud tone and has a curmudgeonly streak. Small makes Ben opinionated without being unlikable, and invests the character with a loving tenderness and a mischievous twinkle that will endear him to many. Ben, like many other Simon characters, has “warts and all” but his humanity shines through. Small makes sure it does.

Donna Warfield has an elegant and free spirit as Blanche and makes her hesitancy and discomfort around her father seem real. Warfield’s Blanche says, with convincing sorrow, that she realizes her mink coat keeps her warm, keeping out the cold. But, in a way, the coat keeps in the cold as well. It keeps her father feeling icy toward her.

Eugene and Stanley are played with vigorous energy by Alex Salup (Stanley) and Bikic. They bound up the stairs of their apartment like children on Christmas morning dash for the tree to see what presents await underneath.

Bikic has a charismatic air as Eugene as well as a boyish, sweet even a bit innocent charm as the younger of the comedy writing duo. Bikic also makes it obvious that Eugene has grown up throughout the course of the play. Toward the end, he comments with a straight face and regret in his voice that as sweet as he seems on the outside, there’s another, unconscious part of him that’s a monster – Eugene Morris Jerome the writer, who was really writing about and making fun of his own family in the comedy sketch.

Toward the end of the play, Stanley, ready to move out for good from the home with Eugene, remarks, “I never realized how cold it was out here before.”

In Simon’s rich, rewarding play, cold and heat serve as vivid symbols more than once. The outside world can be cruel, unfamiliar and cold to beginning writers such as the Jerome brothers. It’s also noted in the play that New York’s winters are too cold for Kate’s mother, but so is her husband too cold toward her.

The chill of the intense winter when the play is set can seep into the house, but it looks inviting and warm as designed with detail and contrast by Sean McClelland. Light and dark colors symbolize the contrast between the bleakness facing the older adults and the bright future facing the Jerome brothers.

Ardean Landhuis’ realistic, mostly bright lighting befits a comedy and also contrasts nicely with the darker pieces of the set.

In “Broadway Bound,” Simon shines a light on people who are flawed. You not only forgive them at the end, you feel as though you’re leaving part of your own family as the curtain closes.