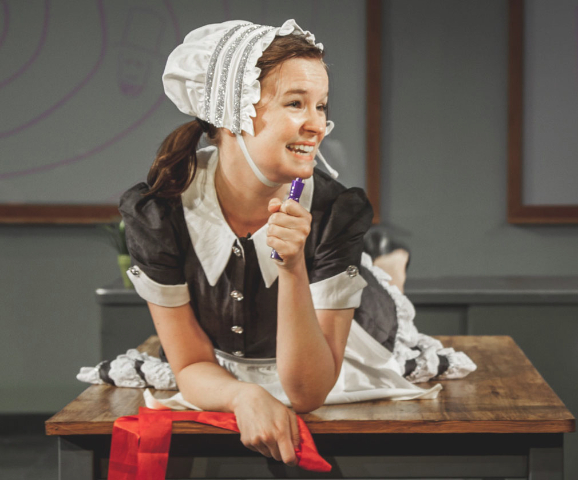 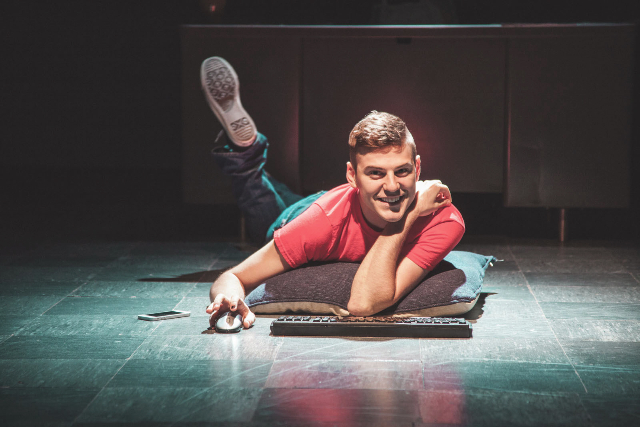 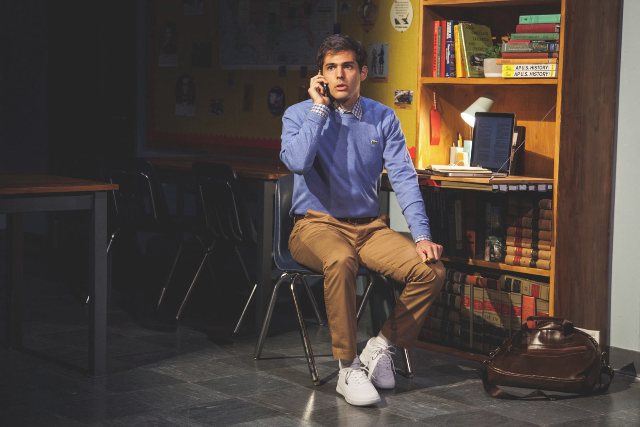 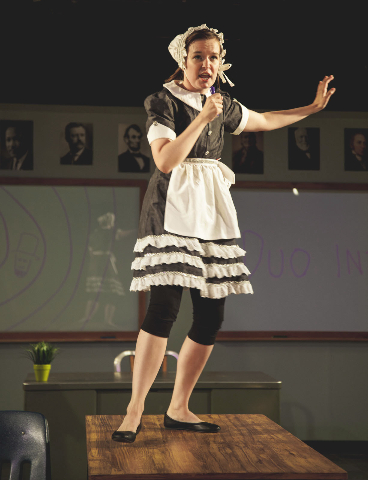 Diwata dressed as a Puritan for her version of The Crucible the musical. 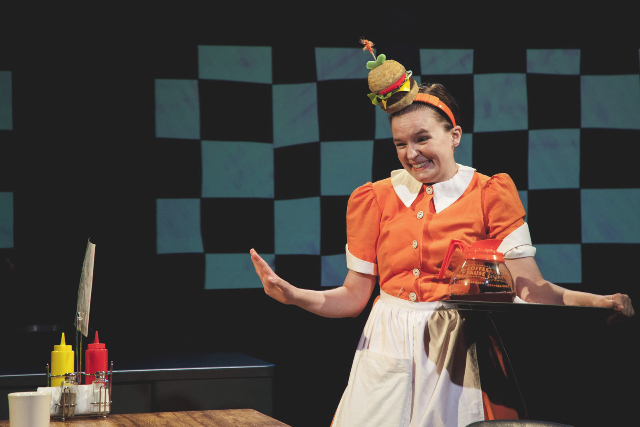 Check out her head gear as a waitress. 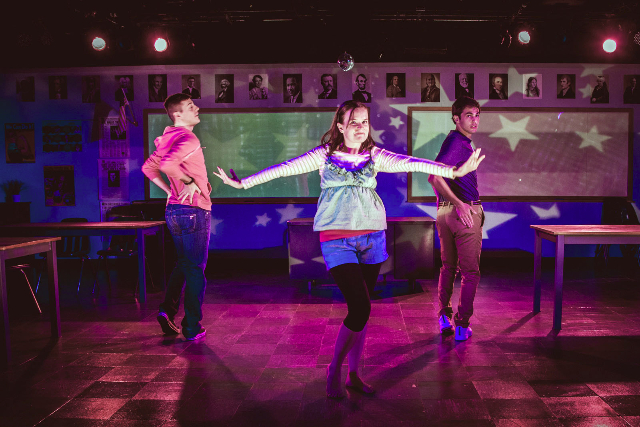 Over the top song and dance routines.

Sprawled on the floor of a classroom, facing us, Howie (Austin Davidson) is using his computer to text a message to set up a potential rendezvous. We notice the polish on his nails.

The exchange of ever more probing and enticing notes appears in graphic form on the rear wall, white boards. They will be used through the 90 minute, one act play for engaging animations by Alex Basco Koch that richly enhance the action and dialogue.

With a realistic classroom set, by Reid Thompson, the intimate St. Germain Stage has never seemed more expansive. This is further enhanced by the lighting of Burke Brown and particularly inventive and essential sound by Palmer Hefferan.

It soon emerges that the awkwardly out Howie is trolling for his teacher. But the motive is not entrapment which is what a wannabe reporter for the school paper, the uptight, preppy, closeted Solomon (Ben Getz) pursues. He’s looking to write relevant stories but is being put off by the faculty advisor (Edelen McWilliams). She returns late in the story as an author of books on adolescence and a reporter for NPR.

She forbids him to write about abortion or other hot button issues.

It’s hell growing up as a teenager particularly when riddled with gawky insecurity and gender identity issues. Where have we heard all this before?

Add to the pair of misfit boys a nerdy, Plain Jane, Diwata (Betsy Hogg), who has delusions of grandeur on stage and screen. It is because of the bleeping drama club director, “who will not be named” but is, that she is not cast in the musical Once Upon a Mattress. But she was an under, under, understudy to the witchy girls in The Crucible by Arthur friggin Miller.

With or without permission of the Miller estate she is working on a musical version of the Salem witch trials. Some of the ersatz lyrics by Tony winning playwright  Stephen Karam (The Humans) are hilarious.

Particularly notable are the costumes designed Nikki Delhomme. She has dressed Diwata in wonky layers that has her constantly morphing. The pièce de résistance is her waitress outfit. The theme of the restaurant has her accessorised with an absurd burger head piece. It is ridculously funny. She also wears a zany Puritan outfit during her musical sendup of The Crucible. Diwata has a show stopping duet with Howie as an honest but gay Abe Lincoln.

About a third of the way through the play, despite the graphic distractions, you wonder, good grief, when will this end? The play may have been fresh in 2007 but its themes since then have become all too familar. With more than 100 productions, however,  it continues to be a popular play.

The acting for the most part is amateurish. Davidson is too old to be convincing as an adolescent. His skills are clichéd and stilted. You sense an inability to get beyond his own persona and into that of the character.

In the early scenes, Solomon and the faculty advisor or between Solomon and Howie, the actors seem to be talking at rather than to each other. There are invisible walls between the characters which negatively reflect on the director Jessica Holt.  That will improve later but the play gets off to a slow and jerky start.

There is a semblance of control to Solomon who is struggling to look and act straight mostly because his upwardly mobile parents expect it of him.

Our initial exposure to Diwata, there are a lot of gags playing on versions of her name, overstays its welcome. On top of a desk, with a computer generated sound track, this wannabe drama queen overly emotes with self indulgent lyrics. It’s like karaoke belted out in an empty saloon.

These are the outsider kids who sit at the loser table in the cafeteria. Seemingly by default, they are forming the school’s speech and debate club. Only Diwata seems to know its rules and agendas. That creates clumsy but amusing results.

The playwright's intention is to make the audience more sensitive to social issues. These are the kind of kids who get bullied  by classmates.

In the current zietgeist there is a plethora of message play programming.  What happens when the outer edge become the center?

Then something happens by the midpoint of an ever more accelerating and absorbing evening.

Hogg’s Diwata just takes charge in an over the top romp, wafting along the dazzled lads who drop into slots as her backup singers and dancers. She is the Diana Ross, and they are the Supremes.

Stop in the name of love.

Eventually, we are flat out floored by the most original and outrageous performance since  Abigail Breslin in the 2006 film Little Miss Sunshine. There is the same kind of come from behind, long shot energy of her Oscar nominated  “Super Freak” performance.

Pulling out all the stops Diwata struts her stuff. With a compelling smile and supercharged inventive energy she has astonishing moves up the wazoo.

In a shocker Diwata launches into a strip tease as she and boys get down to flesh colored skivvies. Oh my! The kicker is that the squeaky voiced performer has tons of chutzpah but isn’t very sexy. Her turn as a ecdysiast is a hilarious parody of eroticism.

Remember the name, Betsy Hogg. There was an aha moment and magical feeling that A Star Is Born.