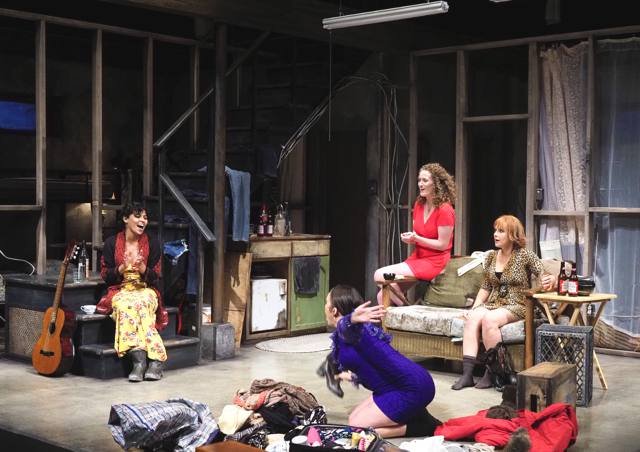 The La Jolla Playhouse (LJP) founded in 1947 by Gregory Peck, Dorothy McGuire, and Mel Ferrer, is one of America’s prestige regional theatres. It has sent more than thirty productions on to the stages of Broadway, nabbing many Tony nominations and Tony Awards in the process.

The Playhouse’s 2017 production-transfer to Broadway, “Come From Away” won the 2018 Tony for Best Director of a musical for LJP artistic director Christopher Ashley.  Ashley has held the creative reins at the Playhouse for the last 11 years. Under his aegis, The La Jolla Playhouse production “Memphis,” also went on to win a Best Musical Production Tony Award in 2010.

With LJP’s current production “Queens”, the playhouse mounts a powerful drama about the plight of both legal and illegal immigrants, and their desperate drive to remain in the United States, in order to make a better life for themselves and their separated families, some of whom remain back in the countries they fled.

For most, ties to their country of origin and families has been severed.  Some cannot or will not go back.  They choose to live in their present situation in the hope that it will change for the better.  Hope is what drives the human soul to keep on going.  Without it, life dies prematurely.

Written by rising award-winning Polish playwright Martyna Majok, and directed by theatre-savvy veteran  Carey Perloff, the story of six female immigrants living in a basement apartment that is illegally-wired and without approved city permits and building codes is a recipe for the exploitation of many immigrants who have no surrogates to speak for them.

Men don’t seem to have Mother Nature’s support system that females have.  The community of women has learned the hard way the strength that bonding produces.  Women have a 10,000-year head start over men, who were too busy just being food and shelter providers, to say nothing of being wary of male strangers in their midst. (Perhaps, this was the impetus for the union movement?)

Director Perloff has seized the ‘Carpe Diem’ moment, allowing us to peek into a subject matter that almost every female in the audience can relate; delivering the reality of the basic inequality of life on this planet, which in the 21st century is finally being highlighted.

The all-female cast of characters represent the countries of Ukraine, Cuba, Afghanistan, Mexico, Poland, and Russia.  It’s an interesting mixture of cultures and accents involved in the telling of their compelling stories.  I’m assuming, in the case of this outstanding cast, either playwright Majok or director Perloff made the decision to have the actors speak in heavily-accented English.

Yes, it’s true to life.  Immigrants have been in America for over 400 hundred years (1607 Jamestown Virginia to the present). But understanding all six characters in heated dialogue, at times, made clarity and communicating the dialogue and the play’s message to the audience a real challenge.  It’s as if one wandered into a foreign language film screening that didn’t have English subtitles. When a production makes it difficult for the audience to connect with what’s taking place on stage, there is a natural disconnect that follows. Alas, some of the theatre audience failed to return for the second act.

For those who did return, the goal for them was to focus more intently on the characters’ accents and body language.  The actors are not only intense, skilled, and committed to the story; they make compelling cases for introspective reflection on the part of the audience.  We have to root for someone or the time invested by the audience will feel like they’ve been short-changed.

The story, in short, revolves around Renia, the landlord of an old building in Queens, NY, who rents out basement spaces in a makeshift apartment setting in 2017 to immigrant women seeking a place to live.  Young Inna arrives at the brownstone tenement where she is met by Renia, who stood on the same stairs sixteen years earlier herself.  The two women are guarded at this first meeting.  Not willing to disclose too much about their pasts or situation but time brings an understanding between them.

Inna agrees to the price of the weekly rental and eventually meets her “neighbors” in the partitioned areas.  The clever set design by David Israel Reynoso provides many nooks and crannies and performing spaces where the action takes place.   Costumer designer Denitsa Blinznakova delivers the thrift store-like costumes that are called for, and the lighting design by Lap Chi Chu imbues the drama with many mood-inducing moments.

There are no star turns in this poignant drama dealing with a slice of life most of the audience never had to endure.  The beauty of this production lies in the solid and capable performances of the entire ensemble group of actors: Jolly Abraham as Aamani; Leslie Fray as Pelagiya/Dragana; Rae Gray as Inna; Brenda Meany as Renia; Melissa Miller as Agata/Lera; and Xochitl Romero as Isabella/Glenys, whose individual informances inform the production of the American immigrant experience.

It’s compelling stuff that slowly wins one over, but make sure you stay until the end.  Also, I highly recommend reading dramaturg Shirley Fishman’s incisive interview in the Program with playwright Majok before the play begins. It’s fascinating and illuminating.

“Queens” performs on the Hugh Potiker stage at the La Jolla Playhouse theatre complex and runs through July 29, 2018.