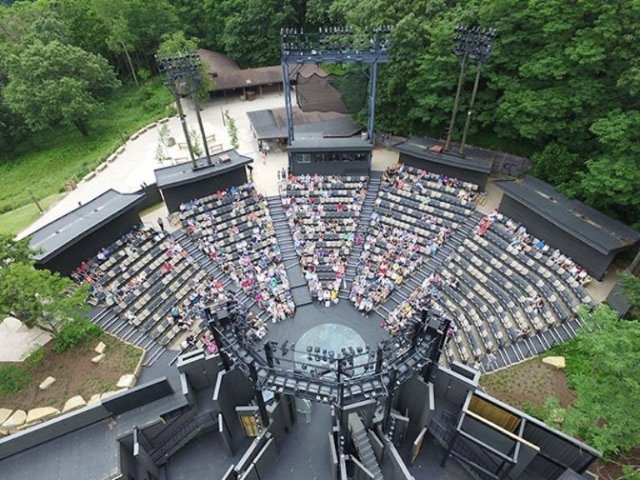 Theatre under the stars. 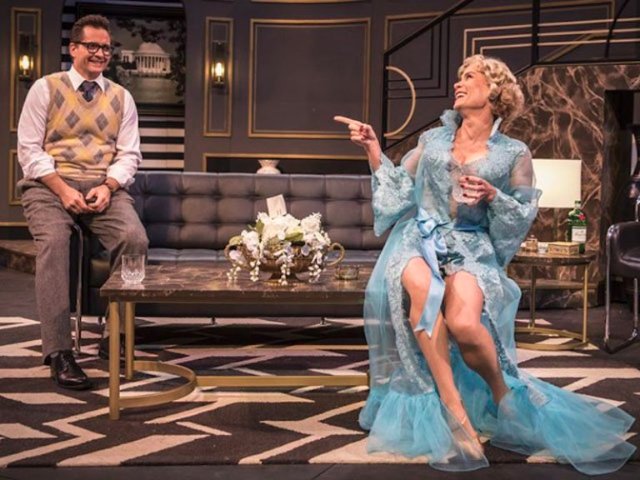 Spring Green is an arts center in nearby south central Wisconsin that’s easily accessible to Chicagoans interested in theater and the work of Frank Lloyd Wright. In a long weekend, you can see classic theater at the American Players Theatre (APT) on a hilltop in Spring Green and tour Taliesin, the home, studio and school built, rebuilt and rebuilt again by Frank Lloyd Wright, his apprentices and family.

I was in Spring Green last week for the annual meeting of the American Theatre Critics Association and, as is our custom, we crammed as many plays as possible into the four-plus days. The conference was expertly organized by Madison ATCA members. Discussions included association-focused business plus panels and speakers on topics such as producing period comedy today, racial equity in theater, podcasting and legal/ethical issues in criticism. We also spent an afternoon on a private tour of Taliesin. First, a recap of some of the plays we saw. There are many theater connections between Chicago and APT, as you might imagine.

At the Hill Theatre, you’re seated in a natural bowl on the hillside. To reach it from parking and picnic grounds below, you walk up a hill through the woods on a gravel path. There’s also shuttle service to the hilltop. Your theater companions are hordes of mosquitoes, so the theater sets up “spray stations” around the grounds.

Set in 1870, As You Like It is a totally delightful and quite traditional rendition of this happy-ending play, directed by James Bohnen. (Bohnen was longtime artistic director and cofounder of Remy Bumppo Theatre. He now also runs Arcadia Books in Spring Green.) Melisa Pereyra is a charming Rosalind and her friend Celia (Andrea San Miguel), her admirable sidekick. After Rosalind is banished by Duke Frederick, she and Celia head to the forest of Arden in disguise. Many scenes and many characters later, disguises are removed and several couples are happily joined in marriage.

An interesting casting choice is Chicago actor Tracy Michelle Arnold as Jaques (a role usually played by a male). At the end, Madame Jaques declines to return to court and makes her own way. During a later discussion, someone suggested that Madame Jaques represents one of those 19th century woman travelers. (As dramatized in the play On the Verge or the Geography of Learning by Eric Overmyer.)

The settings on the Hill Theatre stage are simple and built on the gray frame structure that holds the theater’s sound and lighting equipment. (Actors in Hill Theatre are never amplified because the company prefers natural sound. Thus the company doesn’t stage musicals.)

You probably know the story of Billie Dawn, the “dizzy blonde” who really isn’t, and her thuggish boyfriend. Remy Bumppo Theatre staged an excellent version in 2017. APT’s production brightened our Saturday night, starring Colleen Madden as Billie, David Daniel as Harry Brock and Reese Madigan as Paul Verrall, the journalist who becomes Billie’s tutor and more. Direction by APT artistic director Brenda DeVita was spot-on and each actor kept the pace and the sparkling dialogue.

Haven’t seen Born Yesterday lately? Get a DVD of the 1950 film, starring Judy Holliday and Broderick Crawford. Holliday won an Oscar and a Golden Globe for her performance.

At the Touchstone Theatre. The Touchstone, opened in 2009, is located about halfway up the hill and it’s enclosed, air-conditioned and sans mosquitoes. Both venues have raked seating, so sightlines are excellent no matter where your seat is.

Fugard’s 1961 play, set in Port Elizabeth, South Africa, during apartheid, tells the story of two brothers who live together in a shack in the “colored” section. They have the same mother but different fathers. Zachariah (Gavin Lawrence) works for an oppressive white boss and comes home each evening to soak his aching feet and eat a meal prepared by his at-home brother, Morris (Jim DeVita). Zach is dark-skinned and Morris is a light-skinned man who can “pass” for white and apparently has in the past. Chicago’s Ron OJ Parson directs this slow-burner of a play. Act one sets up the story of Zach’s desire to meet a woman and Morris helps him meet a newspaper “pen pal.” (Yes, that’s how people met before OKCupid and Tinder.)

The pen pal sends her photo (she is a white woman) and later says she plans to visit Port Elizabeth and wants to meet Zach. The two brothers, who have engaged in role-playing games since they were children, embark on a plan. In act two, the games ratchet up to an explosive level. This is a intense play about an era of a different sort of racism than the racism we live with now.

Both actors deliver powerful performances, but there has been controversy over the casting. In early productions of the play, Fugard, who is white, played Morris. And DeVita is white. The optics of the casting selection are tainted because it was made by his wife, artistic director Brenda DeVita. Director Parson came on later but apparently he concurs with the decision.

The controversy is addressed in this article in American Theatre magazine. These questions of representation and appropriation have been roiling the theater world recently. APT has decided to expand the conversation with a special “pay what you like” performance of Blood Knot at 12noon on Sunday, August 12. The performance will be followed by a panel discussion to explore the issues in the play, including the casting.

Exit the King by Eugene Ionesco

Ionesco’s 1962 absurdist play is the story of King Berenger (APT veteran James Ridge), who is told by his first wife, Queen Marguerite, and his doctor that he has only hours to live. His current wife, Queen Marie (the lovely Cassia Thompson) does everything she can to keep him alive. His kingdom is crumbling around him, he has lost all his powers, the birth rate is zero, and by the way, he’s 400 years old. The Doctor (James Pribyl) tells the king, “In three days you lost all the wars you ever won.” Every action in the play is announced by the Guard (Chicago actor Casey Hoekstra), usually to ridiculous extremes.

Marguerite is played by Tracy Michelle Arnold, who also plays Jaques in As You Like It. Arnold and Thompson are both beguiling in their parts but I thought Ridge’s characterization was weak. (We saw him again that night in Born Yesterday, where he plays Senator Hedges.) Exit the King (the only APT production we saw that runs under two hours) is a witty and moving meditation on death and mortality. APT’s production is uneven, but worth seeing if you visit Spring Green.

Our three-hour tour of Frank Lloyd Wright’s 800-acre estate included his former home, studio and school. (More info below about tour options, prices, etc.) I was in two different groups for the tour—first of the Hillside School, Studio and Theater and second of the house known as Taliesin 3. The two groups were led by capable and knowledgeable docents Kyle Adams and Jill McDermott.

The school was built in 1902 to replace the one his aunts had built in 1887. The building features the Assembly Hall, a typically spacious Wright area with a high ceiling, dark and light contrasts in the woodwork and ceiling framing. Built-in furniture pieces were added later. The Drafting Room, in use today by architects and apprentices, has an interesting striped wood flooring, left over from FLW’s design for the Johnson family Racine house, Wingspread. In the theater, Taliesin’s apprentices and staff would perform plays, musical and literary events and view performances by guests. The colorful theater curtain was designed by Wright and made by the apprentices.

The original house was mostly destroyed by the 1914 fire, an event that included the murders of Wright’s lover, Mamah Borthwick Cheney (both had left their spouses to be together), and her children, by a Taliesin workman. Later fires destroyed parts of the house, thus the terminology, Taliesin 3. Half of the extensive house was built for agricultural purposes and functioned originally as animal sheds. The house features many FLW touches, such as bands of windows that frame the grand view of the rolling hills, river and countryside. At one point, the Wisconsin electric company installed electric poles and lines across the land. Wright was incensed and demanded they be removed, because they spoiled his view. (They were eventually replaced by underground wiring.)

Want to learn more? If you’re interested in learning more about the development and history of Taliesin, there are many FLW biographies, of course. But I recommend The Fellowship: The Untold Story of Frank Lloyd Wright & the Taliesin Fellowship by Roger Friedland and Harold Zellman (2006, Harper Collins, 690pp). The authors, a sociologist and an architect, tracked down and interviewed dozens of the apprentices who worked with Wright at Taliesin. Their stories are epic but detailed in the everyday activities, tragedies and scandals at Taliesin, where Wright, a genius, egotist, misogynist, racist and anti-Semite, ruled with an iron hand. He couldn’t manage money and was greatly influenced by his third wife, Olgivanna, who was a devotee of the Greek-Armenian spiritualist, Georgi Gurdjieff. The book is rich in detail, gossipy, well-researched and annotated, and impossible to put down.

Try to plan your trip when the weather is not hot and humid. If I go to APT again, I will choose a time in late September or October. Sitting in the Hill Theatre when the temperature is in the high 80s and very humid and you are covered with insect repellent and persistent mosquitoes is not my idea of comfort. And in midsummer, the sun is out until well into the first act, so there’s not much relief from the heat. I know the Greeks invented outdoor theater, but they didn’t have electricity and air-conditioning. I’ll take my theater inside, with AC and no bugs, thank you. It’s hard to concentrate when you’re miserable and bug-swatting.

Dress casually and wear comfortable walking shoes. Bring water or other beverages, bug spray if you don’t like DEET, and something to fan with.

To tour Taliesin, see tour options and make reservations here. Tickets are $54 each for the two-hour House or Highlights tours, $22 for the one-hour Studio and Theater tour, and $90 for the four-hour Estate tour. Other tours are available too. At the Frank Lloyd Wright Visitor Center, you’ll find a gift shop and the Riverview Terrace Café, serving produce grown at Taliesin.

Dress casually and wear comfortable walking shoes. You’ll be walking on uneven ground and old stone paths. Bring sunscreen, bug spray, water and something to fan with. At Taliesin, most interior spaces are not air-conditioned.

You can support Third Coast Review’s great arts and culture content by becoming a patron. Just visit  Patreon.com/3CR and choose the amount that works best for you. You can be sure we’ll appreciate it.