A Program of Old and New Work 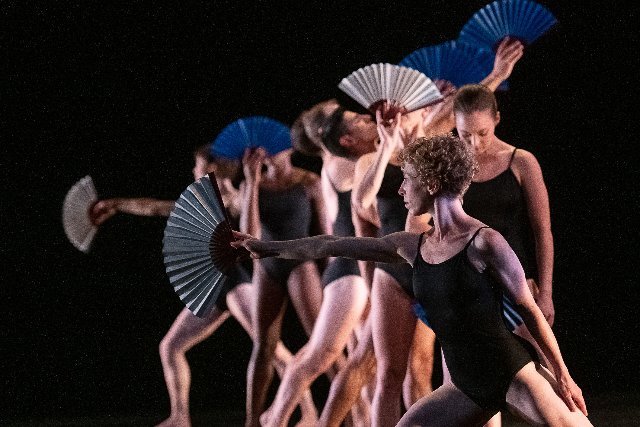 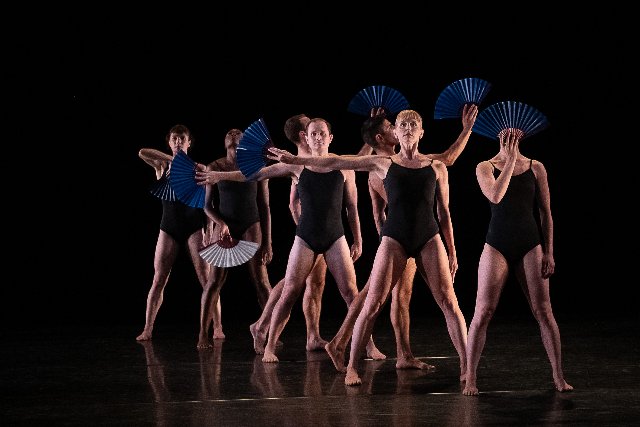 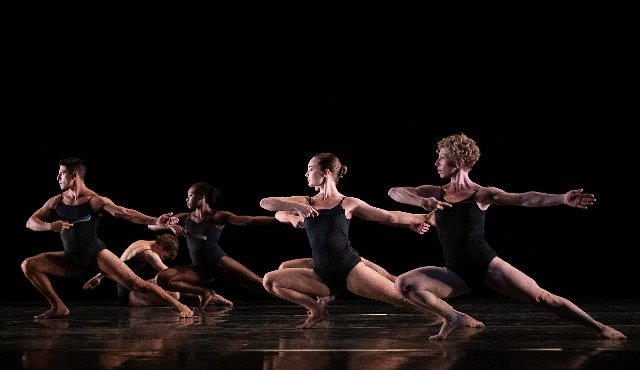 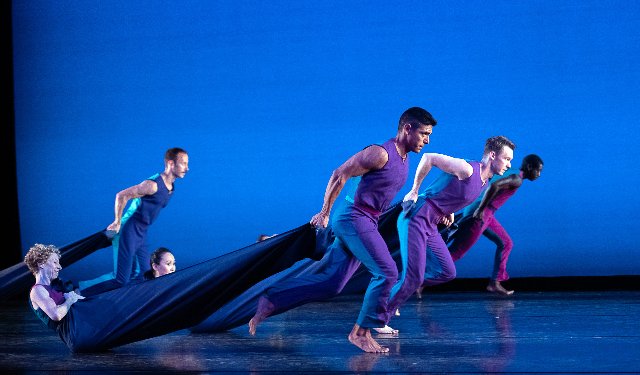 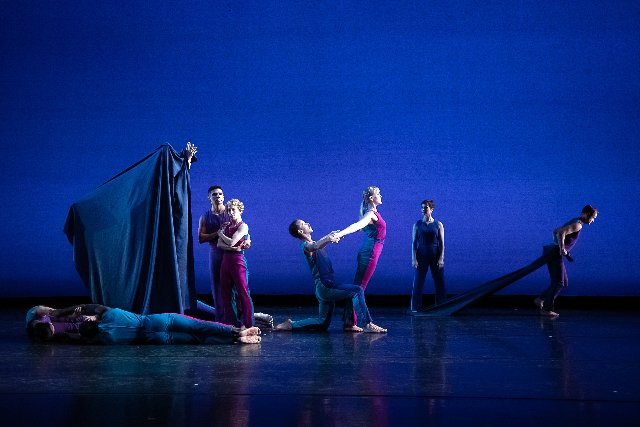 On November 28, 1980, he formed the Mark Morris Dance Group. For the first several years, the company gave just two annual performances. In 1988, he was approached by Gerard Mortier, then the head of the Théâtre Royal de la Monnaie in Brussels. He was offered the position as director of the company.  His company, from 1988 to 1991, became the Monnaie Dance Group Mark Morris, the resident company at la Monnaie. In 1990, Morris and Mikhail Baryshnikov established the White Oak Dance Project. He continued to create works for this company until 1995.

When we first saw performances with Boston’s former Dance Umbrella Morris was still dancing with the company. An indelible memory was his light and whimsical touch in a gold lame suit with top hat and cane in a soft shoe dance. Given his age, weight, and demeanor at the time the performance was miraculous. It is that memory that informs viewing how the company interprets his choreography.

Most often musicality is noted when discussing the essence of his work. He is known as a great curator of music seeking works from the Baroque to contemporary that are uniquely suited for dance. In that sense he is regarded to be the most musical of contemporary choreographers. He has been known to conduct during performances. Another given of the company is an insistence on live music. That has entailed a full orchestra, string quartets, and the solo cello of Yo Yo Ma. For chamber dances this week at Jacob’s Pillow the music was confined to solo piano and duets with violin.

From Boston to the Berkshires we have seen the Mark Morris company on many occasions. For a time it has been the annual resident company for Tanglewood. The return this week to Jacob’s Pillow is the first in five years. Overall, there have been some 20 engagements as well as creative residences. Some of the most renowned works were developed in the Berkshires.

There are times when it has felt that Mark Morris is the only significant contemporary choreographer. That has evoked a sense of overexposure and keen interest in the diversity that Pillow has represented for us over the past several years. We have seen a wide swath of contemporary dance including cutting edge global companies.

From a producer’s point of view nothing succeeds like success. Notably every seat was filled for a Thursday performance. During an excellent and insightful pre-performance Pillow Talk the dance scholar Seth Stewart Williams surveyed the packed porch. Only a couple of individuals were seeing the company for the first time.

Knowing the vocabulary, persona and style of Morris it was delightful that the program started with a new work Sport set to Erik Satie’s early 20th century solo piano “Sports and Divertissements.” In the title of the piece, which premiered last week at Lincoln Center, Morris focused on Sports and deleted Divertissements.

While we did indeed experience a number of athletic games there was actually quite a bit of non sportive movement that would be best described as divertissements. Although witty and delightful on every level there was a lack of cohesion. That’s where the divertissements chime in to make a whole of the sum of parts.

The prevailing sense was episodic with a number of short pieces and requisite pauses. Yet again, however, the music of Satie, from circa 1914, was utterly intriguing. With its Parisian cadences one might well imagine it as the score for a silent film by Charlie Chaplin. Satie overlapped with Picasso/ Braque and the development of cubism. One may suggest aspects of that in the pattern and structure of the music. There are evocations of the ragtime of Scott Joplin (1868-1917) and early jazz of Jellyroll Morton (1890-1941).

If turnaround is fair play, in an early example of globalization, Joplin and Morton were well versed in classical music which informed their compositions. For his part the music of Satie seems less formally Eurocentric and emphatically experimental. Bix Beiderbecke's piano solo “In a Mist” and later jazz pianist Bill Evans absorbed the impressionism of  Maurice Ravel. There was a commonality of ideas that floated across the pond when American boys were “Over There.”

The challenge for the audience last night was to identify the sports and games. Some were immediately obvious, witty and hilarious, others less so. They ranged from golf and tennis to kayaking, sailing, swimming and “blind man’s bluff.” Most inventive was boating. In a plastic cocoon an individual, making paddling gestures, was merrily dragged across the stage. What fun.

Short and sweet but also terrific and delightful was Prelude and Prelude set to Henry Cowell’s “Set of Two for Violin and Harpsichord.” It is a piece for ten dancers. Shortly before each performance, as Williams informed us, Morris designates the soloist.

Early in the work the dancer steps away from the line that extends from front to back. It is somewhat irregular creating a range of possibilities and movements. Remaining for the most part in place they titubate and manipulate fans. One gesture is over the genital area. The soloist seemingly functions independently.

This is the Prelude. Then there is a switch. The line of nine dancers replicates what had been the solo. While the former soloist, with fan, mirrors what they had done previously. It was a tantalizing piece that has us question notions of theme and variation or normal vs. abnormal.

Set to Mendelssohn Words was a piece for eleven dancers. There was a legerdemain prop of a large silk square. Its device was to conceal groupings which appeared and disappeared. There was an emphasis on sorcery of exit and entrance, presence and absence. There was a Morris-like interjection into this serious piece when a dancer’s head poked up for a moment behind the veil. Often there is a gotcha movement and moment in a work by Morris. It keeps us alert.

The second act focused on Grand Duo which is described as a mid career masterpiece. From the beginning Morris has always conveyed variations on gender. Decades ago seeing men as partners had shock value. Today it’s the norm as conveyed in what now feels ever more like a vintage piece. That’s also conveyed by costuming. Few eyebrows were raised to see dancers in Prelude and Prelude in unisex leotards. It was notable that they looked more natural on the forms of women.

In this large format work for 15 dancers the men work short kilts as well as long skirts. The costumes enhanced the ritualistic impact of four segments Prelude, Stampede, A Round and Polka. There were variations of grouping and partnering precisely wedded to the music and cadences of Lou Harrison. Morris has created a number of ballets based on his evocative music.

Most striking for me was when the dancers alternated between lines and circles. There were foot stomps and sounds as they slapped their bodies. In a startling manner it evoked the choreography for Rites of Spring by Vaslav Nijinski. The circle closed in on the woman to be sacrificed.

For me that was strongly referenced. When Nijinski introduced that ritual the audience rioted in 1913. It was reacted to as a violation of the core values of ballet. Last night similar movements were perfectly normal.

It is that ready assimilation that has undermined the meaning and impact of the avant-garde. It fixes and defines Morris as experimental and innovative but also mainstream. Now in his 60s it is challenge for a former bête noire to maintain street cred as cutting edge. What happens to a wild child slipping past middle age?

That’s why, for me, Sport was the most engaging work performed last night. Is it a signifier of the Alter Stil of Mark Morris? For that we will wait and see.