By Min Kahng in Palo Alto 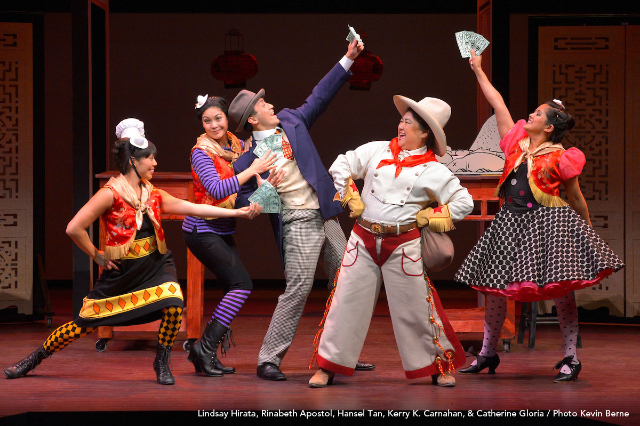 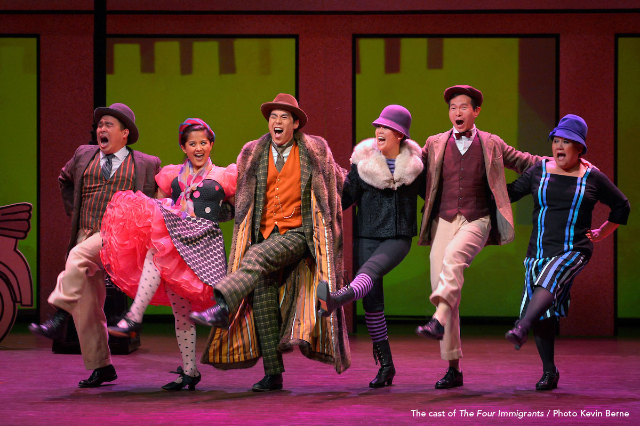 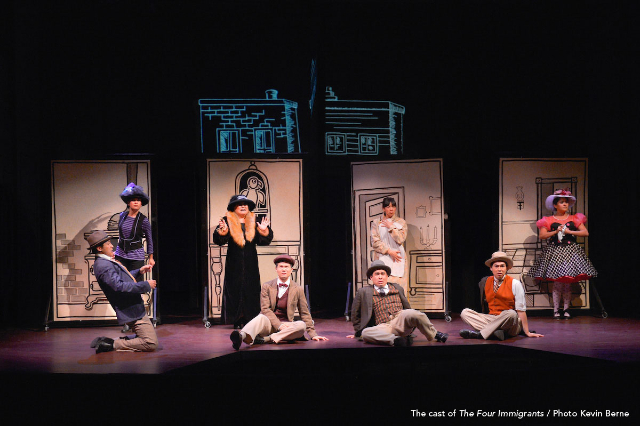 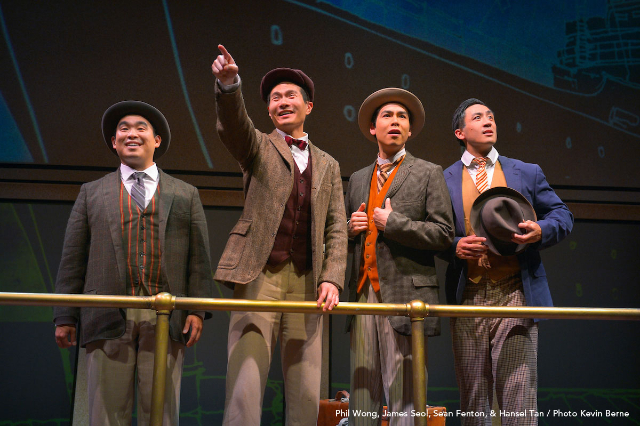 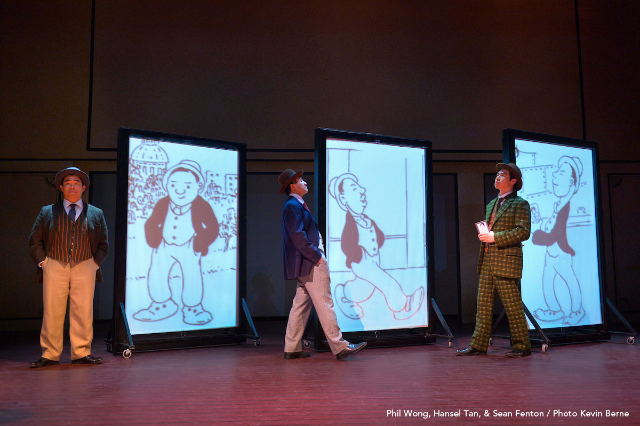 "This land was made for you and me," song by Woody Guthrie.  Or was it?

In 1904, four young men of differing backgrounds and aspirations, each tired of the old ways in Japan, meet in transit to San Francisco and form a bond.  One is an artist, Henry Kiyama, who ultimately will record their triumphs and failures in a uniquely Japanese medium - manga (pronounced with a hard g), a comic book style, but one that can target adults with all manner of serious content.   Playwright Min Kahng happened upon Kiyama's manga, "The Four Immigrants: A Japanese Experience in San Francisco, 1904-1924," in a used bookstore in Berkeley, and that volume became the genesis of the play.

Kahng brings the heartbeats of these immigrants to life with a compelling narrative infused by his own bright and melodic musical score.  The manga look is captured by Andrew Boyce's stunning scenery dominated by large swatches of solid colors and comic details, largely delivered by both painted and projected moving panels. Similarly, Noah Marin's costumes adeptly reflect the period and culture, with men in muted coats and ties and women with striking colors and bold patterns.   Add brisk direction and complex coordination of elements by Leslie Martinson, and this heart-rending world premiere musical dramedy earns its place on the major league stage.

An American Musical Manga Despite their losses, they continue to have hope as depicted in another uplifting refrain, the song "Optimism."  Each man would continue to reach for success in his own way, and each would seize some happiness - from friendship or romance, from political influence or riches.

The four men are well differentiated.  Charlie, played by an earnest Hansel Tan, leads the group.  An optimistic Americanophile and son of a former samurai, his literacy and political acumen outstrip his work skills.  Fred, a suave and confident Sean Fenton, comes from the farm but has the moxie to use his skills to great success.  Frank comes from poverty but has big dreams to own a store and become Frank, the Footware King.  Also, the class clown, he is played with great humor and sorrow by Phil Wong.  Finally, the quietly persistent artist Henry, whose creative work goes unappreciated, is played by James Seol.

Of course, other people are part of the men's lives.  In a thoughtful casting coup, other parts are played by an ensemble of equally talented women - Rinabeth Apostol, Kerry K. Carnahan, Catherine Gloria, and Lindsay Hirata.  Apart from the expected women's roles, they also portray a casino owner, a policeman, and a judge, all of different gender and ethnicity than their own.  In the context of comedy, the ruses with farcical disguises add another layer of amusement to the mix.

Following the lives of four characters, the overall arc is populated many evocative vignettes.   One funny episode occurs when Charlie meets a young woman at the Japanese pavilion of the 1915 Pan Pacific International Exposition, which marked San Francisco's return from the ashes of the earthquake and fire.  In wooing her, he seeks to charm her and demonstrate his American acculturation with a discerning quote from Thoreau only to receive a rebuff in words from Emerson.  He then quotes Dickenson, only to receive a witty riposte from Longfellow.  Charlie ultimately is granted a date, but he soon realizes that he has a tiger by the tail.

Others deal with signature events of the immigrant experience such as letters from home, picture brides, gambling, grittiness, and obstacles to success.  In one of the most touching moments, cast members sing nostalgically of the culture they left behind in the achingly beautiful "Furusato" (hometown).  Given the audience's hushed attention followed by thunderous applause, empathy for the immigrants' sense of separation and loss is palpable

"Four Immigrants" also confronts the institutionalized and social discrimination against Asian-Americans.  While the shameful internment of Japanese ethnics, including U.S. citizens during World War II is well known, the prior litany of local and nationally legislated discrimination toward Asians is perhaps less known.  Our four friends suffered from much of it.

In the first decade of the 20th century, the overwhelmingly European immigration to the United States spiked.  But increasing numbers of Asian immigrants to the West Coast prompted a yellow scare.  Among active sanctions against Asians in the two decades of this play were prohibitions against becoming nationalized citizens, owning land, and marrying whites as well as segregated schooling.  The final insult was the 1924 Immigration Act which denied Americans born of Japanese parents automatic citizenship.  Prima facie, Congress and President Coolidge brazenly violated of the 14th Amendment to pass this disreputable act.

This play speaks passionately to the modern sensibilities of the Bay Area.  Let's hope it can speak to Kankakee and Cincinnati.

"The Four Immigrants: An American Musical Manga" with book, music, and lyrics by Min Kahng is produced by TheatreWorks and plays at the Lucie Stern Center, 1305 Middlefield Rd, Palo Alto, CA,  through August 6, 2017.