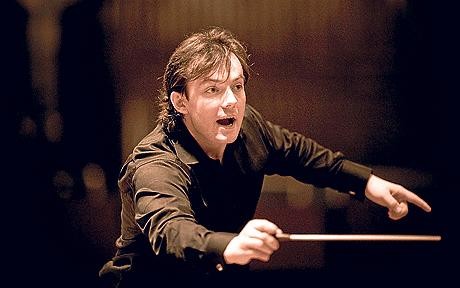 One of the most anticipated Tanglewood appearance this summer was the only scheduled appearance of the newly appointed BSO director Andris Nelsons. Accordingly his Verdi Requiem on July 27 has been cancelled. He was scheduled to meet with the media on Friday.

Statement from Mark Volpe, BSO Managing Director:
“Due to a household accident that has resulted in a severe concussion, Andris Nelsons will not be able to conduct the Verdi Requiem at Tanglewood on July 27. Over the weekend, Mr. Nelsons was struck in the head by a door that unexpectedly swung open at his residence in Bayreuth, Germany, where he has been conducting at the festival.  Mr. Nelsons is currently receiving medical attention at a hospital in Bayreuth.  His doctors report that he is expected to make a full recovery but, as always with concussions, Mr. Nelsons has been strongly advised to take time out of his work schedule and not travel by plane at all at this time. It is therefore with a heavy heart that he is forced to withdraw from his Tanglewood performance.

Though this is disappointing news to all of us at the BSO, as well to the orchestra’s many supporters, we have every expectation that Mr. Nelsons will recover as quickly as possible and that we will see him in Boston in October for his scheduled concerts at Symphony Hall.  Our thoughts are with Mr. Nelsons during this time of healing and recovery.”

Statement from Andris Nelsons, recently appointed the next Boston Symphony Orchestra Music Director, starting in the 2014-15 season:
“Truly, I feel a great sense of sadness at not being able to come to Tanglewood this week to conduct the Verdi Requiem and to spend time amongst our great musical family, including Tanglewood's wonderfully supportive audience.  I will miss you all and am very sorry indeed that this very unfortunate accident prevents me from being there. I am grateful to be receiving the best possible medical attention and am currently resting well. I promise I will recover as soon as possible and very much look forward to coming back in good shape for my performances with the orchestra in October in Boston.”

An announcement about who will conduct Tanglewood’s July 27 performance of the Verdi Requiem will be forthcoming.

Click here for complete details about the BSO’s May 2013 Music Director Announcement.