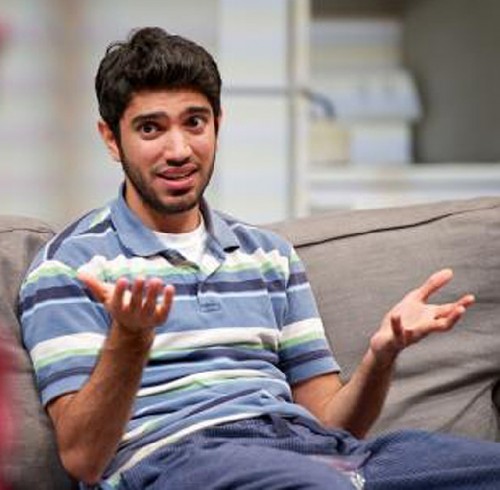 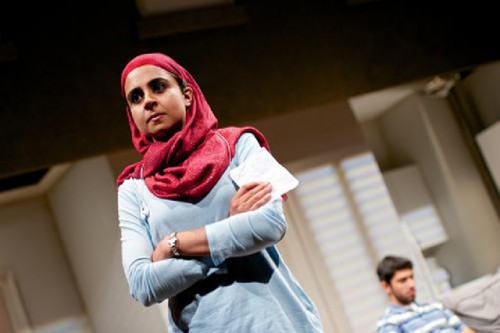 Yalda (Mahira Kakkar) is the widow of a husband killed in Pakistan by a misguided American drone attack. 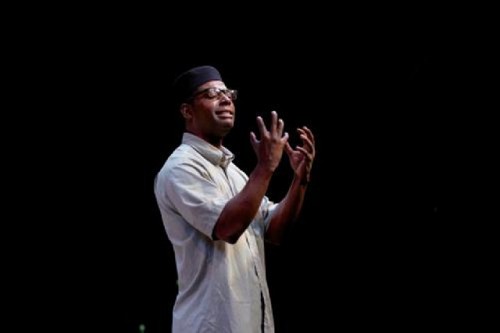 Bomb maker Qalalaase (Royce Johnson) is the mastermind behind the terrorist attack. 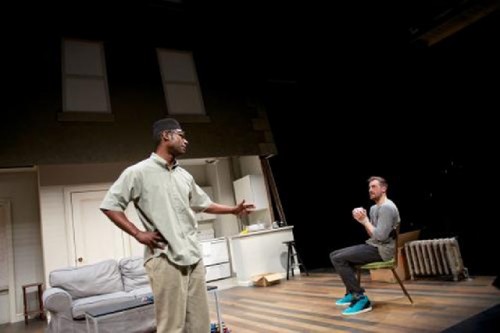 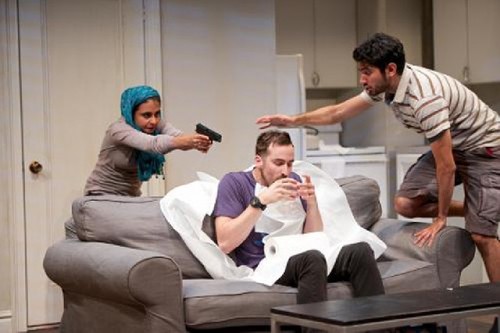 What to do with the prisoner?

In the opening scene of Jon Kern’s Modern Terrorism, the darkest of comedies having a second production at Contemporary American Theatre Festival in West Virginia, Rahim (Omar Maskati) the cutest and most endearing suicide bomber you are ever likely to meet, or the remains thereof, is standing there in his skivvies.

Quite intently Qualaase (Royce Johnson), a Yemen trained bomb maker and Fagan of youthful zealots, is feeling around in Rahim’s shorts to wire powerful explosives.

He works first from above then squats between Rahim’s legs to finish the job.

We are taken back by the intimacy and vulnerability to which the youthful assassin appears to be accepting and even apathetic.

It is crucial not to wet the delicate wiring.

“My balls don’t sweat” Rahim states evoking a bit of nervous laughter from the audience.

To prove his point he leaves the dank, New York apartment (designed by David M. Barber) occupied by the terrorists and an accomplice Yalda (Mahira Kakkar) to jog around the neighborhood.

Returning, again he states that see “My balls don’t sweat.”

But when a change is made from briefs to the boxers which Yalda has purchased for the mission they do. Sweat that is. This aborts the mission which launches plan B. Part of which is finding a new target and ordering replacement parts through Fed Ex.

They get sent to the wrong apartment. The stoner, Jerome (Kohler McKenzie), who lives upstairs, knocks on the door and delivers them. It is discovered that he had opened the package and thus compromised the mission. There is panic and quick discussion of what to do with the witness.

After some interrogation it seems that Jerome is not just whacked but dumb as a post. With not quite credible Stockholm Syndrome, and having no apparent moral compass or goals in life, he quickly plays along and even makes useful suggestions.

All of this is intended to be funny.

But it isn’t really.

Not just to humanize the enemy who has family, friends and loved ones who regard him as a martyr. But to humorize him and the bumbling ineptitude of these would be assassins.

Kern’s absurdist comedy being reworked at CATF was originally inspired by the failed attempt to detonate explosives in Times Square. There may be some leverage in mocking plots that fail but this production was in the works during the April 19th bombings in Copley Square at the finish line of the Boston Marathon.

The explosions which we watched from a motel room on Cape Cod occurred right in front of the office of my former dentist. As a kid I grew up watching the Marathon which passed by our home on Beacon Street in Brookline.

So, yes, it was difficult to wrap my head around a comedy about suicide bombers. It is grim material to play for laughs. There is understandable outrage that the Marathon Bomber graces the cover of the current issue of Rolling Stone like a rock star.

It is one thing to attempt to understand an enemy intent on our destruction, causing willful loss of life and limbs, and quite another to morph into celebrity and empathy.

Which raises the bar that it truly must work as humor and satire or run the risk of being gratuitously cheap, obvious and deeply offensive.

Is there a statute of limitations on comedy evoked by tragedy? How does gallows humor allow us to cope with the unspeakable? When did you first hear a 9/11 joke? Was it told to you with guilty pleasure by a friend?

The long winded title refers to Dr. Strangelove which is a stretch of over the top wishful thinking. It does however remind us that the power of humor helps us to deal with the unthinkable. In the case of the Kubrick film the very real and constant threat of nuclear annihilation. Arguably, we have learned to live with if not exactly love the bomb.

It is a matter then of the quality of the writing and ability of the director, Ed Herendeen, and actors to bring a horrific agenda to life on stage that allows us to laugh at its absurdist dark side.

While there were valiant efforts all around the end result was at best mixed.

Although Rahim was charmingly devoted and innocent we also never really felt or understood his motivation. There was a short hand assumption that the audience instinctively knows why fundamentalist fanatics blow themselves to bits for the Love of Allah “God is Great” and paradise with its endless Arabian Nights of nubile virgins.

Unfortunately, we do not understand that in this play. We have had too many examples of such sacrifice to consider. It is a subject that has been treated endlessly in the media, film, TV, and now theatre.

In 1949 Theodor W. Adorno wrote "To write poetry after Auschwitz is barbaric.”

That was then. Fast forward to “Springtime for Hitler” in The Producers a brilliant musical written by a Jew, Mel Brooks.

There is always room for satire, from Lysistrata by Aristophanes to A Modest Proposal by Jonathan Swift.

Only Islam forbids satire. To make light of Mohammed results in fatwa and death threats. Here Kern evokes comedy about inept terrorists but steers clear of mocking their faith. To what extent was that intentional through fear of reprisals?

When Barrington Stage produced Sweeney Todd: The Demon Barber of Fleet Street  a 1979 musical thriller with music and lyrics by Stephen Sondheim and libretto by Hugh Wheeler there were those who refused to buy tickets.

If the intention of Kern’s play and CATF’s production is to shock and provoke discussion then it is a success. Surely everyone who has seen it has something to say. The discussion among the 75 visitors of the American Theatre Critics Association attending the festival was lively and diverse. There were seemingly equal numbers among those who enjoyed or despised the play.

Perhaps for that reason it will make the rounds of regional theatres.