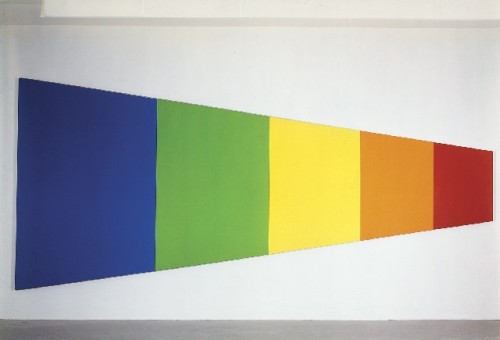 Blue Green Yellow Orange by Ellsworth Kelly will be featured at the MFA this fall. Photos courtesy of the Museum of Fine Arts. 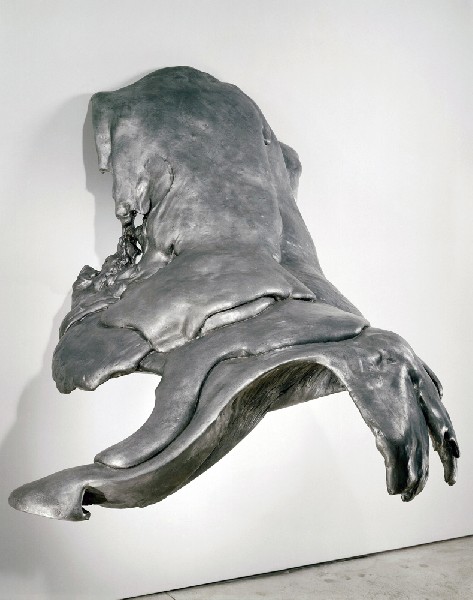 A poured piece by the sculptor Linda Bengalis is among recent acquisitions. 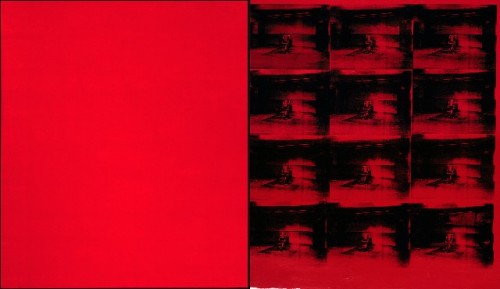 After opening its 130,000 square foot, $340 million Art of the Americas Wing in November you might have thought that the Museum of Fine Arts would have taken a rest. After all, it was the largest expansion the museum undertook since the 1981 I.M. Pei-designed West Wing, which it dwarfed, and it largely succeeded in transforming the museum and the role it plays in the community.

But, no, that was just the first step. This fall brings the second salvo in the creation of the new MFA, a museum your grand parents would have a hard time recognizing.

Before he announced the busy fall schedule to the press last week, which includes the opening of a re-designed West Wing dedicated to contemporary art and a once-in-a-lifetime Degas exhibition, museum director Malcolm Rogers spoke a bit of the recent past. “More than a million visitors have come to the MFA since the Art of the Americas wing opened, including President Obama,” he boasted, adding that the museum had become a popular family destination with a 70 percent increase in attendance by children.

He continued with the numbers: More than 300,000 visitors to the Dale Chihuly exhibition represented for Rogers the museum’s new ideal – that art is for everyone. He reported that the three story-tall “Lime Green Icicle Tower” in the museum’s new atrium would stay until at least December and that the museum was attempting to raise the funds to purchase it. In an aside, he said that he was confident that the money would be there.

Enough of the past. The MFA has looked there too much and too fondly.

Rogers was here to announce the final details of the Sept. 17-18 opening of the Linde Family Wing for Contemporary Art. With 80,000 square feet including 21,000 square feet of exhibition space, the wing will take over the entire West Wing. Rogers was in a genially combative mood, throwing down the gauntlet, “We want the West Wing to be the coolest spot for contemporary art in Boston.” En garde, ICA!

There are those who have suggested that the MFA does not have a contemporary art collection. And that it is reluctant or embarrassed to show the few works of contemporary art it has picked up with no sustained focus over the years. The founding curator, Kenworth Moffett, favored formalist painting and sculpture and showed and purchased little else. His successors -Ted Stebbins and Amy Lighthill - went wild, skating all over the map, picking up some German neo-expressionism here, some trendy New York City painting there and odds and ends – some very good – by artists such as Alice Neel and Gregory Gillespie, until they ran out of steam (and money).

The next team - Kathy Halbreich and Trevor Fairbrother - favored international conceptual art and created the only real “contemporary” art program the museum ever had, and they purchased what they showed. They didn’t last long. The less said about their successor - the unfortunate Carol Brutvan - the better. She favored mediocrities along with second-rate works by big names for reportedly big prices, although she did snag a few prizes.

Now, we’ll see what it all looks like together. Cross fingers.

If the dismal 20th century gallery in the Art of the Americas Wing – the major flop in that vast installation - does not give you confidence that the museum will get it right, then you’re not alone.

However, the advance information presented by Edward Saywell, the Linde’s Wing’s chief, is cheering.

First of all: new acquisitions, of really new art and classic pieces the museum missed when they were new. There’s a 1968 Ellsworth Kelly multi-paneled color piece thanks to Bank of America; a 1970 cast aluminum wall-piece by Lynda Benglis – one of those works that look like a massive silver leak of viscous toxicity has frozen into place; and a vintage George Segal sculpture. They will be shown with works from the collection by Morris Louis, Andy Warhol, Dan Flavin and Sigmar Polke.

Most exciting among the “contemporary” contemporary acquisitions is Chrisian Marclay’s tour-de-force video “The Clock,” which will be shown, all 24 hours of it, during the September opening. Take your favorite form of No-Doz if you want to see it in its entirety. Other recent contemporary acquisitions include a Mark Bradford collage painting and an El Anatsui bottle-cap assemblage. (And there will be surprises – Saywell showed an image of a Nick Cave figural sculpture, but didn’t say whether it was an acquisition or a loan.)

Also smart is the way the work will be shown: by theme rather than movement or chronology and with mediums intermingled. Although there will be dedicated galleries to craft and to video/film. Actually, this is the only way the MFA could show its contemporary collection without exposing itself to shame and ridicule. It has so many gaps it can hardly show one post-war movement or time period well. Large-scale color photography from the past 30 years is its best bet.

By focusing on theme, by putting cast works by George Segal, Kiki Smith and Rachel Whiteread together, for instance, it can, one hopes, make a strong point about contemporary art without raising questions about what’s missing overall.

The most promising element in the plan is the most nebulous, but if the museum can pull it off, it could help redefine how contemporary culture in general can be experienced in Boston. (Many feared that the vast atrium of the Art of the Americas Wing would be a dead zone, but it has turned out to be the liveliest space in the museum. I suppose the big question is whether one institution can support two such spaces.)

The museum is hoping that the West Wing’s transition spaces off which the galleries, the Remis auditorium and the book store/shop open will serve as a sort of contemporary culture forum – that’s my word, not theirs. The galleria walls will host installations – the opening one, “Sparking Dialogue,” inspired by the museum’s Jenny Holzer’s “LED Truisms,” features works based on words – and also feature new acquisitions. Kay Rosen was commissioned for a major 120-foot wall piece on Level 1.

The former galleria cafe will become a sort of café/lounge/wine bar, and one can imagine friends meeting there after having seen a film in the French Film Festival, attending a lecture, visiting the galleries or  browsing the bookstore. It could be the glue that holds the whole thing together.

Not to be lost in the shuffle is “Ellsworth Kelly: Wood Sculpture,” which the museum is touting as the first museum survey to focus on the great colorist’s wood sculptures. (Through March 4.) An alumnus of the School of the MFA, with his 1968 work highlighted and a solo show, Kelly is the Linde Wing’s favored artist. This focused retrospective will be in the Henry and Lois Foster Gallery, which has served as the museum’s contemporary art space since the West Wing opened in 1981 and will remain the gallery for special exhibitions.

Degas and the Nude

The major exhibition of the fall season, and certainly one of the most important exhibitions in the United States is “Degas and the Nude,” a collaboration with the Musee d’Orsay in Paris, the depository of the largest collection of Degas nudes in the world. The exhibition opens at the MFA, its only U.S. venue, Oct. 9 and continues through Feb. 5.

A product of three year’s labor by George Shackelford, the museum’s curator of 19th and 20th century European art, it will nicely follow his brilliant exhibitions, “Gauguin Tahiti” (2003-04) and “Monet in the 20th Century” (1998), which he organized with Monet specialist Paul Hayes Tucker. It will also serve as Shackelford’s swan song. It was recently announced that he will leave the MFA in January to become senior deputy director of the Kimbell Art Museum in Fort Worth, Texas.

Just hearing the title of the exhibition, I expected a lot – few artists of any era and culture top Degas in my affection. But Shackelford’s presentation of many of Degas’ best works in paint, pastel, charcoal, monotype and sculpture, blew me away. As a plus there will be real masterpieces by his predecessors Ingres (“Angelica Saved By Ruggiero”) and Delacroix (“The Death of Sardanapalus”), his peers Caillebotte – a rare male nude – Renoir, Cassatt and Gauguin, and his followers, Bonnard, Matisse and Picasso.

The MFA has two other high-profile events opening this fall.

The museum’s first gallery dedicated to jewelry, the Kaplan Gallery, has just opened. With some 11,000 objects ranging in time from ancient Egypt to the present, the museum has one of the most comprehensive jewelry collections in the world. Only 75 are featured in the first exhibition, “Jewels, Gems, and Treasures: Ancient to Modern” (through Nov. 25), but they are displayed so alluringly that you leave the tiny gallery – a jewelbox, to coin a cliché - sated. (Well, I did. I am sure there are some gem fanciers who would like to see all 11,000 – and wear some of them.)

The exhibits move briskly from the ancient world – an Egyptian pectoral is a stand-out – to the 19th century. There are relatively few works from the middle ages and the Renaissance, not to mention Asia and Africa. There is too much focus for my taste on the wealthy women who wore the jewels – Babe Paley, Marjorie Merriweather Post, etc. I suppose that is the danger of dealing with objects that are beautiful but intended to advertise wealth and power.

Opening Oct. 26 in the Torf Gallery is “Aphrodite and the Gods of Love,” an exhibition of 160 Greek and Roman works of art dealing with Venus, who needed no jewels or much of anything else to enhance her beauty. The show features work from the museum’s superb antiquities collection, but the Italian government, showing its appreciation for the museum for having recently returned many works of illegally-acquired art, will loan several key pieces.