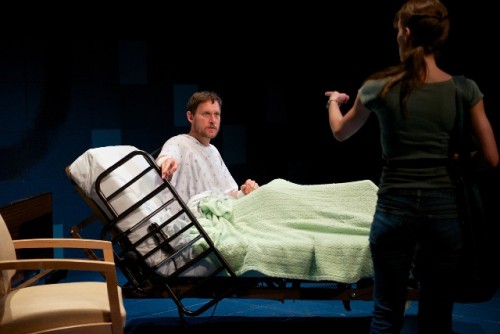 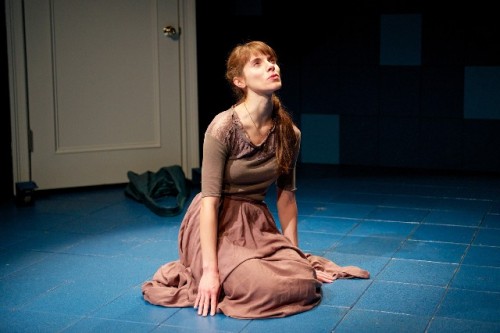 God speaks to and guides the aspiring actress. 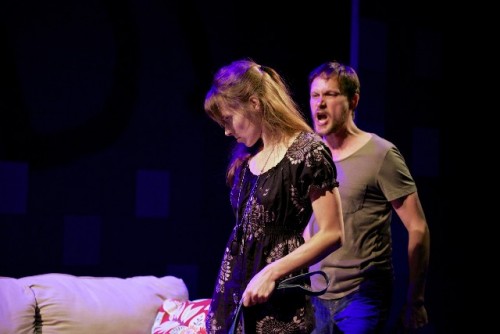 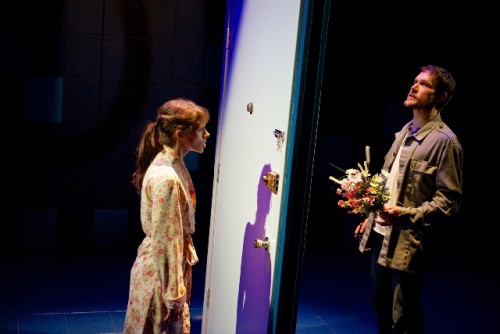 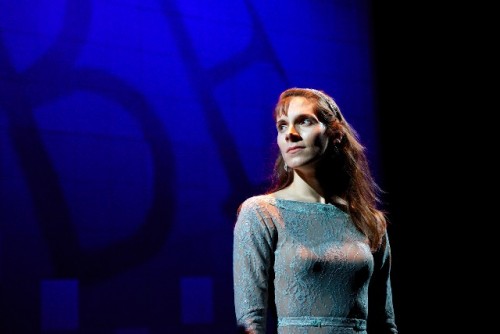 Dancing with the stars at a Hollywood gala. 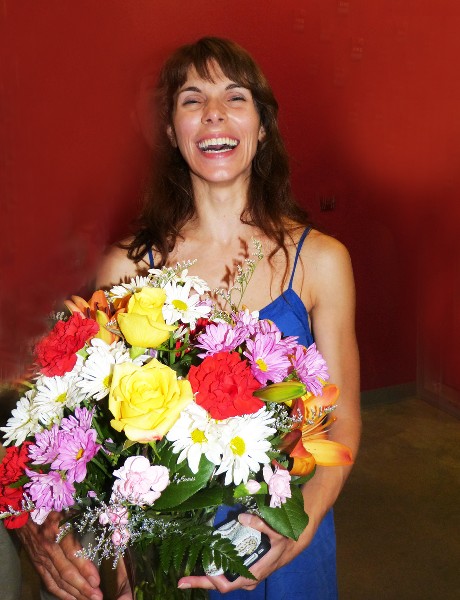 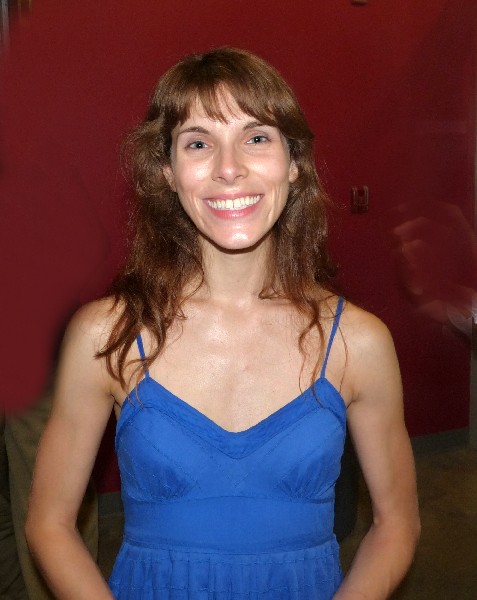 Mair is an emerging performer in a breakout role. 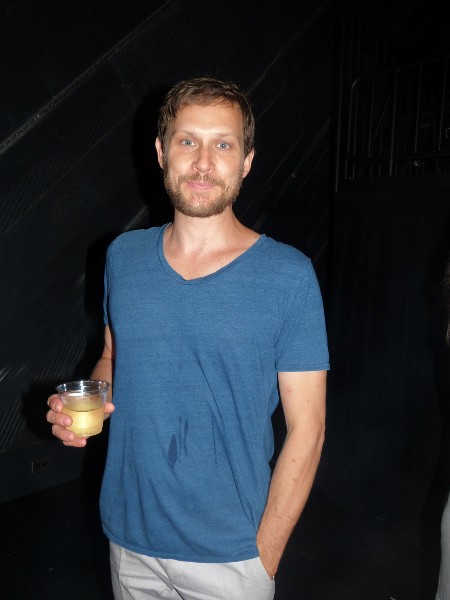 Alex Podulke relaxes after the show. 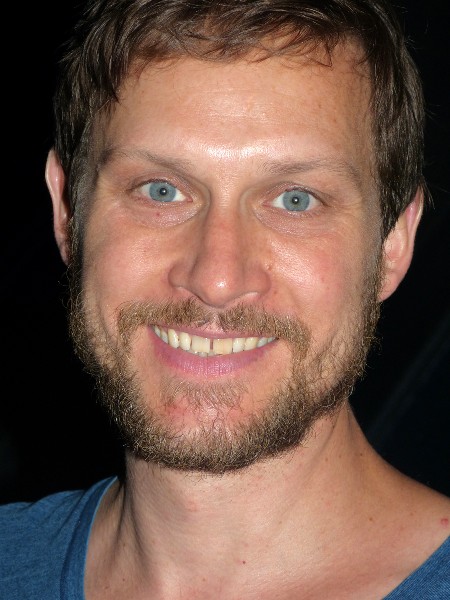 Podulke has the chops to make it to New York in H2O.

Of the five plays of the 23rd  Contemporary American Theatre Festival in Shepherdstown, West Virginia, through July 28, the most buzz and impossible to get ticket, is generated by the elusive Jane Martin’s H2O.

Part of that is a simple matter of numbers. On the smallest of three stages for the festival the theater holds 90 seats with a sharp incline. The actors are just inches away from the front row.

Accordingly, the 75 members and guests of the visiting American Theatre Critics Association were asked to remove our ID lanyards. This was a courtesy to the actors, Diane Mair (Deborah) and Alex Podulke (Jake). It is challenging enough to perform a tautly crafted, intensely visceral, emotionally draining drama without the added factor of an audience almost entirely composed of critics.

In the opening minutes of the play Jake, an alcohol and substance abuse challenged Hollywood super star, cracks a joke about alcoholism. When there is mostly silence rather than the expected laughter he comments, tellingly, “Tough house.” Which we hilariously and self consciously responded to.

Later Deborah, an aspiring actress and Evangelical Christian doing the Lord’s work on stage, comments on an emerging career of playing, at best, in 90 seat houses. Again there was a guilty pleasure response at the knowing line about life mirroring art.

Based on the scorching performances, before an audience of critics, it is likely that in the future these actors will be widely know, deeply appreciated, and performing on bigger and more renowned stages.

Of the five plays in this festival, while the other four need work from tweaking to triage, H2O, following this world premiere in Shepherdstown, is ready for prime time. With perhaps some fine tuning particularly for the gruesome and disturbing conclusion.

During a farewell reception for the visiting critics, attended by some of the actors, I asked Podulke what comes next for the play? Clearly there is enormous interest and he stated that in their contracts the actors have been given an option of “first refusal” for the next production.  But he added that a producer may be reluctant to cast unknowns if the play is headed to New York.

That, ironically, is precisely the theme of the play. It underscores the Broadway trend to cast Hollywood stars, with little or no experience on stage, to fill seats. In this case Jake is an arrogant, lost soul who may, or may not, be saved by embracing the Lord as Deborah proselytizes.

Self described as crazy and a born loser Jake got lucky to be cast as a mute action hero in a film and sequel which earned a gazillion bucks. While gaining mega fame and fortune, which includes shagging hundreds of groupies and anything else he might want, he has never earned his bones as a legitimate actor.

He has lots of bread but no cred and zero self esteem.

The ultimate litmus test for film stars, a cliché, is to play Hamlet on Broadway. With, the plot point that drives this play, the right to cast Ophelia. So far the women who have read for the role are too Ophelia like but not Ophelia. Through complex circumstances he comes to believe that Deborah is perfect for the role.

Hence a possible meaning to H2O which has a double entendre of the fusion of elements that creates water as well as signifiers of Hamlet and Ophelia.

The suicidal Jake also hopes that playing the existential Dane will gradually talk him down from his self destructive urges. Playing Hamlet is not just a theatrical challenge but a dose of much needed therapy. Toss in Deborah, doing the Lord’s bidding, who is intent on saving his soul. Well, unfortunately, with limits.

I asked the charming and affable Podulke if he had met the playwright? There was a shocked expression in response to the trick question. A critic listening in came to the rescue of the actor before he stumbled into a response.

All of “her” plays have been directed by Jon Jory and there is speculation that he may be “she.”

Of course this underscores a trope of the philosopher Ludwig Wittgenstein, in shorthand “Formalism,” that posits that biography plays no part in evaluating a work of art. Once released by its creator, in this case a play, art must be considered entirely on its own merit.

This is like looking at a painting by van Gogh and not thinking about his ear or suicide.

It is a disassociation from the vulgarian norm of conflating the work or object with the colorful persona of the creator. What then to say about works by artists who do not have remarkable private lives? Or create anonymously? Like just about all of Gothic art. During the Renaissance, through Vasari’s “Live of the Artists,” we were seduced into the norm of fusing the persona with his or her creations. The cult of personality and celebrity has persisted ever since.

What then of the work itself? In this case H2O?

Several of my jaded colleagues, who had generally trashed the other four works in the festival during informal discussions, stated that “It’s the best play I’ve seen this year.” Another, who remarked that he would not return to CATF, based on the potential of another H2O, said that “I’ll be back.”

Another colleague ripped the play apart with compellingly sound reasoning. When Jake assaulted Deborah why didn’t she report him to the police? Did she compromise her alleged Christian values to appear on Broadway?  Arguably, of the five contemporary plays none had been life affirming. “Where was the balance in the program?” What message does that convey to audiences about contemporary theatre?

There is no denying that the excitement surrounding H2O, for whatever reasons, is palpable, although we emerge from the theatre somewhat shell shocked.

The production, based on the “Jane Martin” mythology, just about sold out as soon as it was announced. It was only possible to secure a ticket by subscribing to the complete series of five plays.

The chemistry between the actors was scorching. How apt during a brutal heat wave. But this was about emotional temperature.

Yes, it was over the top and at times a stretch.

Like Deborah "emergency" baptizing of the sinner Jake by dunking his head in a fish pond at a sushi restaurant.

Or the My Fair Lady sequence of “I Could Have Danced All Night” when Jake invites Deborah, no strings attached, to fly first class to a star studded Hollywood event. He comps her with an exquisite gown as they waltz and mingle. Like any aspiring young actress her head bobs about in wonder.

Yes, there is a credibility gap between his hard ass, foul mouthed, jaded persona and her chaste, virginal devotion to doing the Lord’s work. She discusses talking with Jesus and, get this, we believe her.

Given the strident script these actors might devolve into caricatures. It is a credit to their abilities, as well as the superb direction by Jory, that they are so convincing. Through this roller coaster one act play we are cliff hanging and nail biting on the edge of our seats.

Much of that impact was augmented by impeccable, inventive production. When Deborah visits Jake’s apartment, or he her’s, a door frame is wheeled out then swiftly dispatched. (Design by David M. Barber) All of the costume changes (by Trevor Bowen) and makeup adjustments happen before our eyes. There is an exquisite economy of means that precisely fuels our imagination.

Bet on seeing this play again, in New York, and then regional theatres. Let us hope that the next producer doesn’t recast the roles with marquee names. Stick with these actors and rest assured that they Will be stars. Diane Mair may be the next Nina Arianda (Venus in Furs). While Podulke jets to Hollywood to star as a mute action hero.