Sense and Sensibility at Old Globe 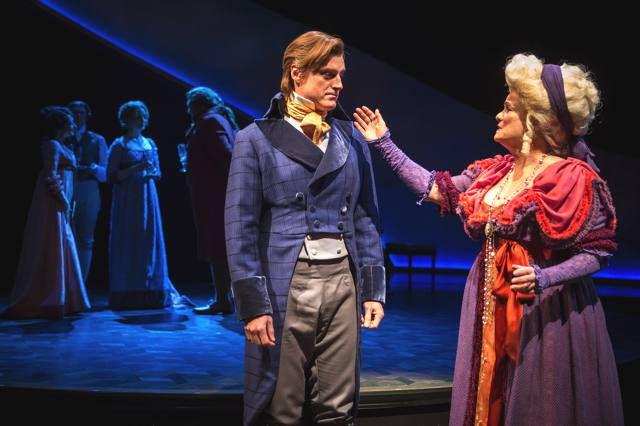 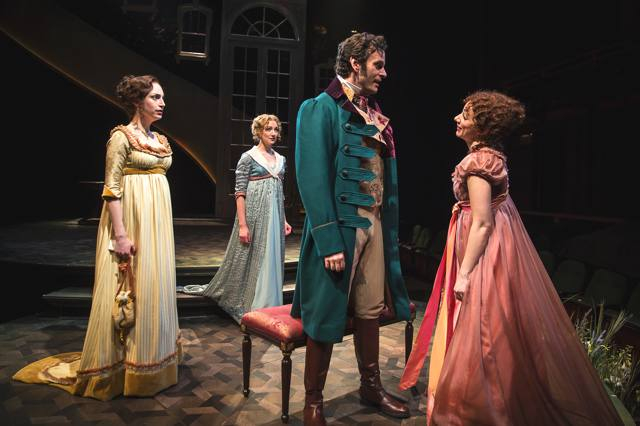 When it comes to precious stones, diamonds in particular, there are precious few that are flawless. However, when it comes to musical adaptations of classic source material, the field is wide open.

San Diego’s venerable Old Globe Theatre is currently staging a vibrant, engaging and thoroughly delightful production of Jane Austen’s “Sense and Sensibility”. Austen’s timeless classic tale of romance and manners in late 18th century England is lovingly re-imagined by Tony-nominated composer/lyricist/librettist Paul Gordon. Gordon also penned Austen’s “Emma”, another smash musical production that was seen at The Globe in 2011. It appears that Mr. Gordon is going to be two for two in winning musical adaptations from the pen of the superbly talented and clever Ms. Austen.

This dazzling production brilliantly staged by Chicago Shakespeare Theatre’s founder and artistic director Barbara Gaines (who makes her Old Globe directing debut with this production) is vividly directed with assurance, style and elan. There is something refreshing and positive to be said about artistic directors like the Globe’s Barry Edelstein, who imports talented and creative theatre artists and acting companies in a cross-pollination exercise, like Gaines’ mainly Chicago-based actors now gracing the boards as cast members in “Sense and Sensibility”.

Playwright Gordon’s musical re-imagining of Austen’s 200 year-old novel of the same name is not only faithful, but is beautifully realized with his rich and lush score along with many winning two-part harmony numbers sung by Megan McGinnis as Marianne Dashwood and Sharon Rietkirk as Elinor Dashwood, becoming almost Mozartian in its precision and clarity. Both leading ladies are wonderfully in-the-moment actors as well as gifted singers.

The production is chock full of clever and insightful musical numbers. Stand-out crowd pleasers include: ‘Lavender Drops’, and ‘Somewhere in Silence’, both sung by Ms. McGinnis and Ms. Rietkirk.  ‘Elinor’, is nicely sung by Wayne Alan Wilcox as Edward Ferrars, a shy suitor to Elinor, who together with McGinnis and Rietkirk form a fine trio to sing ‘So the Poets Say’ later on.

Sean Allan Krill as Colonel Brandon delivers a haunting and an achingly poignant falsetto rendition of the song ‘Lydia’, in a tender memory moment to his late wife. Krill also scores again with his bittersweet lamentation concerning an older gentleman’s pursuit of a much younger woman (Marianne) with the song ‘Wrong Side of Five and Thirty’.

‘House with a View’ sung by Lord Middleton (Brian Ray Norris) and Mrs. Jennings (Paula Scrofano) provide the lighter and comedic moments in a production that is full of deft directorial touches and performances.

This wonderful fourteen member cast/ensemble is a potent combination with nary a false move in its flawless execution. Not only are the performers strong and sure in their performances, they have the knowledge and the experience of working together many times for director Gaines at Chicago Shakespeare Theatre. For this production, familiarity definitely ‘breeds success’ which is a big plus for Globe audiences.

In the technical department the creative team led by director Gaines is outstanding. The Old Globe Theatre has few equals when it comes to providing a large technical arsenal available to fulfill the director’s creative staging requirements.

Scenic Designer Kevin Depinet creates a stunning, eye-popping, and dominating architectural touch to his wide space-staging components that demand precise execution when flying various set pieces, including three large (8 feet by 8 feet) framed oil paintings, two chandeliers, an on-stage swing (shades of Sir Peter Hall), and a host of other clever designer and directorial touches that are a visual feast for the eye.

Complementing Depinet’s sublime visuals is the highly nuanced and mood-inducing lighting design by Donald Holder, who supplies just the right amount of light to see and appreciate the gorgeous period-perfect costumes designed by Susan E. Mickey.

The production is further enhanced by a nine piece orchestra under the baton of music director and conductor Laura Berquist. There is really no substitute for a live orchestra when presenting a musical; the audience likes it and the singer/actors respond to it. It’s a luxury worth every penny is costs to have live music. Musical theatre doesn’t get much better than this when it comes to entertainment.

“Sense and Sensibility” is a splendid musical production not to be missed by Jane Austen lovers; it’s just one more example that quality live theatre is alive and well at San Diego’s Old Globe Theatre in Balboa Park.  The production performs at the Donald and Darlene Shiley stage through August 14, 2016.