Changes for a New Play by Mark St. Germain 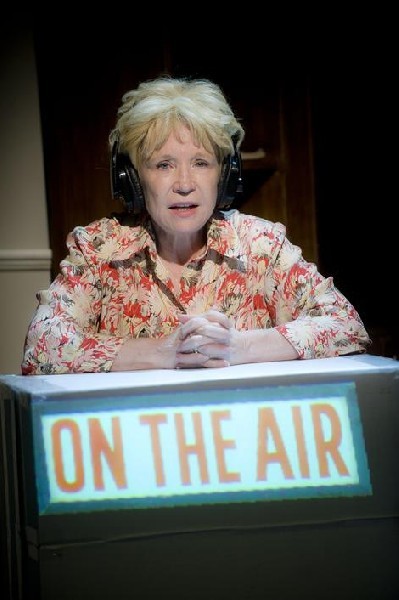 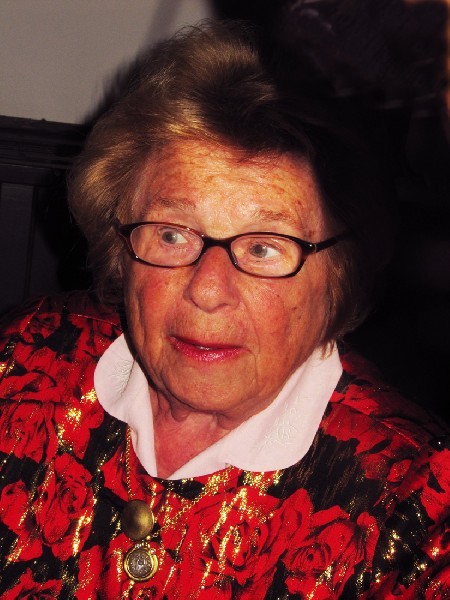 Dr. Ruth attended many of the performances of the play. Giuliano photos. 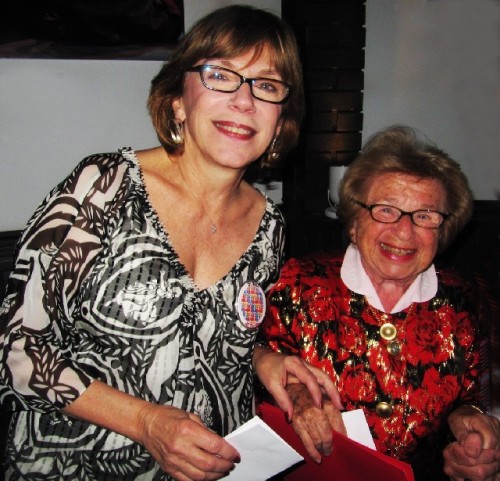 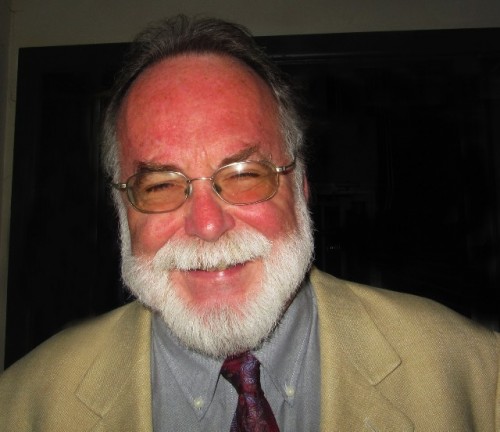 Following the opening of Dr. Ruth All the Way I met for breakfast with the playwright Mark St. Germain. It was an opportunity to catch up on a range of topics we had discussed previously. It was agreed to talk in background rather than as an interview.

By then I had posted a review but we had an informal conversation about the process of developing the play. Asked for an opinion I said that it would be better if reduced from two acts and about two hours to one act and 90 minutes. He agreed.

Equity rules state that once a play has its opening night no further changes may be made. Which is why we are seeing ever longer previews on Broadway. Like the problematic Spider Man which went on for months with many overhauls and rewrites before it finally had an official opening. Bloggers often jump the gun and there are even individuals tweeting and texting during performances.

We didn't see any of that for Dr. Ruth which had a few previews before opening night. It premiered to strong reviews with the understanding that it is a work in progress. During interviews Dr. Ruth stated that the play is headed to New York. But, as of June, St. Germain would not confirm a venue. The topical play, with a stunning peformance by Debra Jo Rupp, is likely to make the transition.

Before that happens the play needs more work. Following opening night St. Germain continued to take copious notes. He told me that the play was likely to have a return run in the Fall. With a new staging that resets the clock allowing for further changes. Particularly to refine it to a more compact single act.

Even if you have already seen the show, as some 4,000 individuals and the media have, it will be worth taking another look. It is inevitable that Dr. Ruth will have a solid audience base in New York. That gives you bragging rights for having followed its development at Barrington Stage.

After a sold-out run of 36 performances from June 19 through July 21, where over 4000 patrons attended the world premiere of Dr. Ruth, All the Way, Barrington Stage Company, presents a fall return of Dr. Ruth, All The Way by Mark St. Germain, directed by Julianne Boyd.  Starring stage, film and television actress Debra Jo Rupp (That 70s Show), Dr. Ruth, All the Way will run from September 19 – October 7 at St. Germain Stage (formerly Stage 2) at the Sydelle and Lee Blatt Performing Arts Center, 36 Linden Street, Pittsfield.

“We are thrilled that our audiences have embraced Dr. Ruth, All the Way and look forward to sharing Dr. Ruth’s life story and Debra Jo Rupp’s amazing performances with many more people this fall,” said Artistic Director Julianne Boyd.
Dr. Ruth, All the Way is the first commission of Barrington Stage’s New Works Initiative. This commission is courtesy of Sydelle and Lee Blatt & Rosita Sarnoff and Beth Sapery.
Everyone knows the pioneering radio and television sex therapist Dr. Ruth but few know the incredible journey that preceded it. From fleeing the Nazis in the Kindertransport and joining the Haganah in Jerusalem as a scout and sniper, to her struggles to succeed as a single mother coming to America, Dr. Ruth, All the Way is filled with the humor, honesty and life-affirming spirit of Karola Ruth Siegel, the girl who became “Dr. Ruth,” the internationally known radio and TV  "sepxert."
The design team includes Brian Prather (sets/projections), Scott Pinkney (lights), Jennifer Moeller (costumes), Gabriella Pollino-Rodman (wigs) and Jessica Paz (sound).  Kate J. Cudworth is production stage manager.
Debra Jo Rupp (Dr. Ruth) BSC: Ring ‘Round the Moon, To Kill a Mockingbird and The Laramie Project. Debra Jo Rupp has performed at Williamstown Theatre Festival in True West and A Flea in Her Ear, Berkshire Theatre Festival in Mornings at Seven and the Chester Theatre Company production of Lee Blessings’ Body of Water.  In New York, Debra Jo has appeared on Broadway with Kathleen Turner and Charles Durning in the 1990 revival of Cat on a Hot Tin Roof. She starred Off-Broadway in Cynthia Heimel’s A Girl’s Guide to Chaos (American Place), Frankie and Johnny in The Clair de Lune(Westside Arts) and The Butcher of Baraboo (Second Stage).  Debra Jo has made over 300 television and film appearances and is probably best known for her role as “Kitty Forman” on the hit series “That 70’s Show”. Her feature films include playing Jay Baruchel’s mom in She’s Out of My League, Kickin It Old Skool, Air Buddies, Clockwatchers with Toni Collette and Parker Posey, Spymate, Lucky 13, Sgt. Bilko with Steve Martin and Dan Aykroyd, and her first film Big with Tom Hanks. Among her notable television appearances are booking agent “Katie” on “Seinfeld”, Phoebe’s sister-in-law on “Friends” and “From the Earth to the Moon” (dir. Sally Field).
Mark St. Germain (Playwright) is the acclaimed playwright of The Best of Enemies and Freud’s Last Session.  Freud’s Last Session, Barrington Stage Company's longest running play, played over 750 performances Off-Broadway, and has been performed nationally and internationally. He's written Ears on a Beatle (BSC), The God Committee (BSC) and Out of Gas on Lover's Leap. Other plays include Camping with Henry and Tom (Outer Critics Circle Award and Lucille Lortel Award) and Forgiving Typhoid Mary.  He most recently directed and produced the documentary My Dog, An Unconditional Love Story, featuring Richard Gere, Lynn Redgrave and Glenn Close among many others. It was chosen to be the first documentary shown on the Oprah Winfrey Network. Television credits include Writer and Creative Consultant for The Cosby Show, Life Stories and Dick Wolf's Crime and Punishment. With Randy Courts, he has written the musicals The Gifts of the Magi, Johnny Pye and the Foolkiller, winner of an AT&T "New Plays for the Nineties Award," both produced at the Lamb's Theater, NYC.  Jack's Holiday was produced at Playwrights Horizons. Mark's musical, Stand By Your Man - The Tammy Wynette Story was created for Nashville's Ryman Theater and has toured nationally.  He is an alumnus of New Dramatists where he was given the Joe A. Callaway Award, a member of the Dramatists Guild and the Writer's Guild East. He was awarded the "New Voices in American Theatre" award at the William Inge Theatre Festival. Mark is a Board Member and Associate Artist at Barrington Stage Company.
Julianne Boyd (Director) founded the Barrington Stage Company in January, 1995. Her directorial credits at BSC include last season's critically acclaimed production of The Best of Enemies, Sweeney Todd, the Demon Barber of Fleet Street (2010), A Streetcar Named Desire (2009), Follies (2005), the world premiere musical The Game, based on Les Liaisons Dangereuses, Mack and Mabel, A Little Night Music, Cyrano de Bergerac and The Importance of Being Earnest. In 1997 she directed BSC's smash hit production of Cabaret, which won six Boston Theatre Critics Awards and transferred to the Hasty Pudding Theatre in Cambridge for an extended run. Ms. Boyd conceived and directed the Broadway musical Eubie!, a show based on the music of Eubie Blake which starred Gregory Hines and garnered three Tony nominations. She also co-conceived and directed (with Joan Micklin Silver) the award-winning Off-Broadway musical revue A…My Name Is Alice (Outer Critics’ Award) and its sequel A…My Name Is Still Alice.  From 1992 to 1998 Ms. Boyd served as President of the Society of Stage Directors and Choreographers, the national union representing professional directors and choreographers in the U.S.
Dr. Ruth, All The Way will be presented at the St. Germain Stage (formerly Stage 2) at the Sydelle and Lee Blatt Performing Arts Center, 36 Linden Street, Pittsfield. Performances are Wednesday-Friday at 7:30pm, Saturday at 4pm and 8pm, and Sunday at 3pm. Tickets: $40-$49.
Back to Theatre Section Home