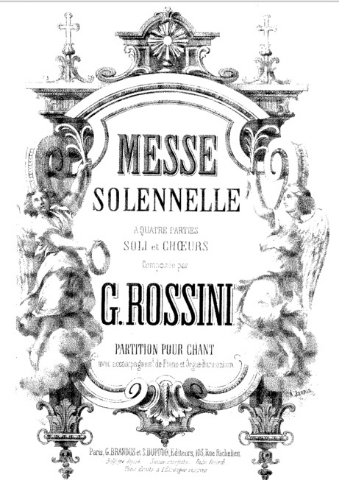 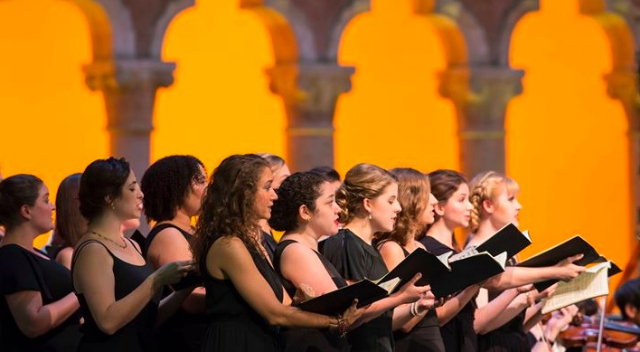 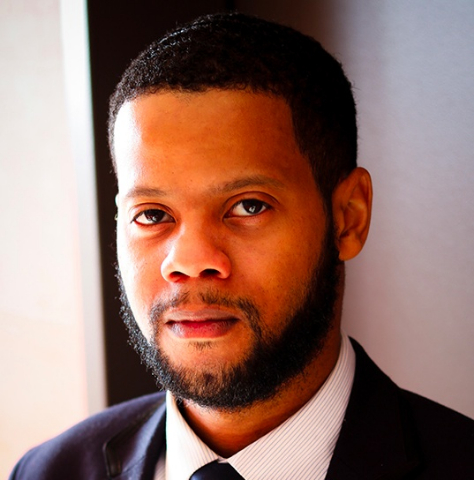 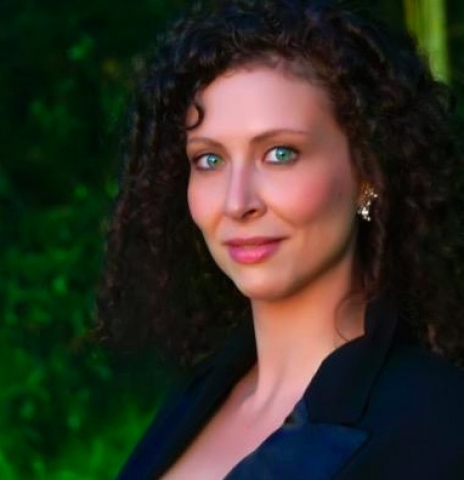 Rossini stopped writing operas at the age of 37. He did not compose again for decades. When he was able to move back to Paris, and build a country home in Passy with his second wife, he took up his composer’s pen again. To the end of his life, he composed over 200 works which he gave the umbrella title Sins of Old Age. He was touching up the Petite Messe Solennelle when he died in 1868.

The pen is important here, because Rossini revised by carefully removing the inked notes on the page with a knife, a laborious yet loving task for him

The Mass was premiered at the home of perhaps the world’s, greatest banker, Count Alexis Pillet-Will. He had commissioned the piece. Rosssini had an offer from a prestigious musical Academy whose members included Franz Liszt. He preferred the banker, who was said to be worth $95 million at the time, a staggering sum of money, Kingly, in fact Papal, in its magnitude.

Rossini composed the mass for a chorus of 12 voices and 4 soloists. In a private home, women as well as men were able to sing. Rossini wrote the Pope to permit women’s voices inside Catholic churches and cathedrals, but his pleas fell on deaf ears.

Petite Masse Solonnelle was the last performance of Will Crutchfield’s Bel Canto singing program at Caramoor. Next year they will reside at the State University in Purchase, New York. What a send off this glorious, strange and modern-sounding mass was.

Rossini wrote the accompaniment for solo piano. Then to add heft, he added another. For the sustained notes that the piano was not constructed to provide at the time, he used a harmonium.

Crutchfield explains that orchestrations have been tried, but the piece is best performed as a chamber mass. The so-to-speak ‘first’ piano alternated between Timothy Chung and Derrick Goff, the two gifted pianists on stage. The organ, played by Lucy Yates, was used for additional sustenance from time to time.

Emerging from her instructional work with artists was Rachelle Jonck who came to Caramoor from South Africa almost twenty years ago to assist with the singing program. She turns out to be a first-rate conductor. She keeps the singers and instrumentalists together with beautiful arm gestures, often soft and swelling. Suddenly a downbeat will be accented by her left arm slashing from above her head to its lowest reach.

Jonck brings out the operatic melodies that flow naturally from the mass. Like Rossini, she displayed wit, making this mass, announced by the composer as small and solemn, quite the contrary. Color and drama are drawn forth at every opportunity. Rhythmic excitement abounds.

In the Credo Rossini ingeniously uses the word ‘credo’ as a unifying motif to which he repeatedly returns. This section of the Mass concludes with another brilliant fugue for the chorus, to the words ‘Et vitam venturi saeculi, Amen’. The O salutaris, a hymn not part of the Mass, provided Rossini with an opportunity to explore the unusual harmonies he was using. Even today this work sounds modern.

The final Agnus Dei was luminescent as sung by contralto Vanessa Cariddi. This was always Rossini’s favorite voice. The choir brings the work to a dramatic close.

Rossini wrote at the end of his manuscript: “'Dear God, here it is finished, this poor little Mass. Have I written sacred music or damned music? You well know I was born to write comic opera. It contains scant learning, but all my heart. Praise be to you, and grant me entry into Paradise.”

Whatever his intent, he has left a unique work in the religious repertoire.

At the conclusion of the performance at Caramoor, a graduate of the Bel Canto program, Jennifer Rowley, who had a stunning Metropolitan Opera role debut in Cyrano de Bergerac this spring, joined in the Easter Hymn from Cavalleria Rusticana.