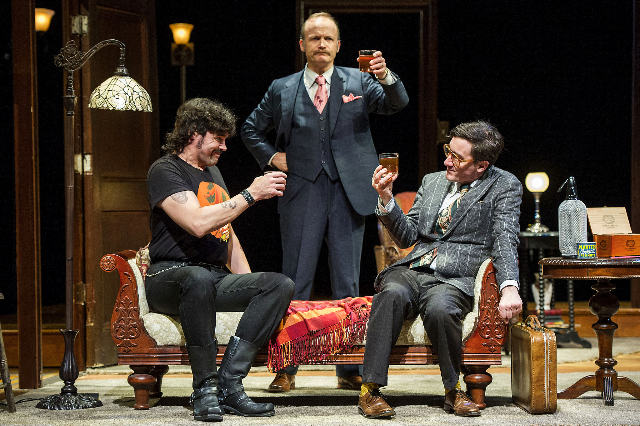 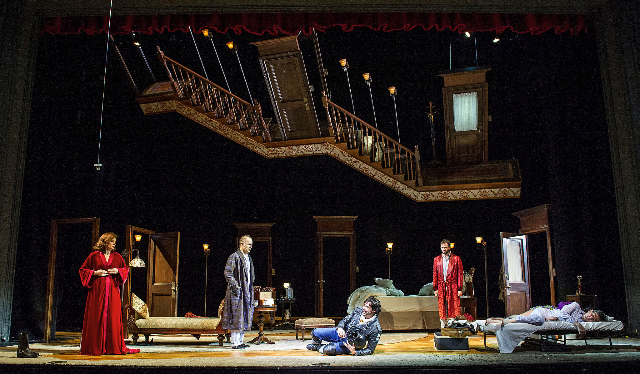 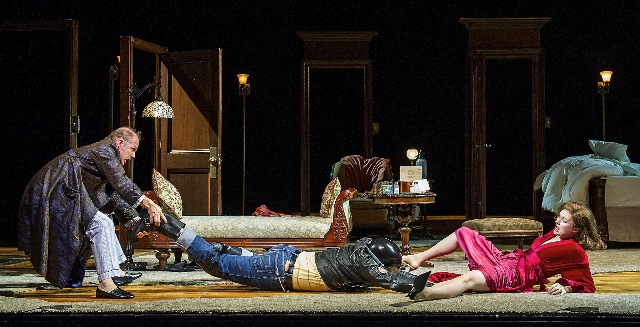 Crazy sex adds to the laughs. 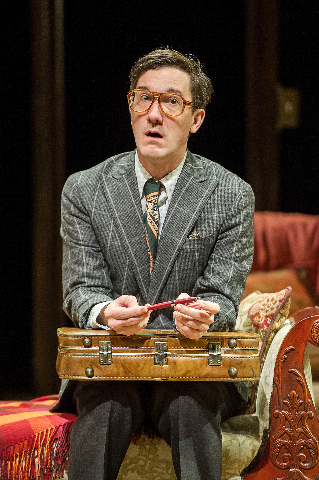 In a supportive role Carson Elrod as Tristram gets most of the laughs. 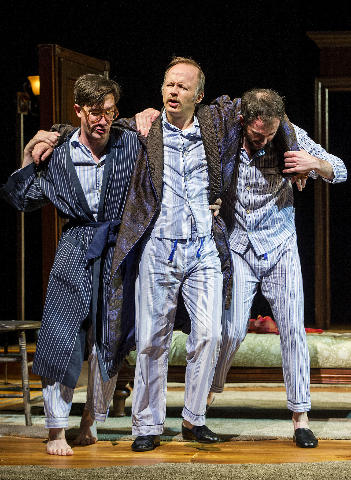 Walking off one too many.

In a refreshing change of pace from a deluge of message plays, yesterday at Barrington Stage Company, we could sit back, relax and laugh.

Leaving our thinking caps at home there was no heavy lifting in the delicious British farce, Taking Steps, by the redoubtable Alan Ayckbourn. At last count he has written 77 plays. After the knockout job that director, Sam Buntrock, and a truly gifted cast did with this one, one hopes that over time Barrington will produce the other 76.

As to the plot, cripes, did I say plot? Well, I suppose there is one, but why get hung up on technicalities. You need a score card and cheat sheet to sort all the zany sight gags, physical comedy, twists and turns, running up and down stairs (the title aptly is Taking Steps) and all the rest of the wacko folderol.

Launching the ever more topsy turvy madness we first encounter the frustrated housewife Elizabeth (Claire Brownwell) who is intent on leaving her ditsy, stiff upper lip, Brit husband Roland (Richard  Hollis.) As a dipsomanic, milked for gags, he may be more stiff than upper lip.

Pouring her heart and soul out to her brother Mark (Luke Smith) she writes a mash note and is intent on packing bags and escaping a ramshackle, leaky old house in the Midlands, before he is due home. This time she will not be greeting him with a negligee and a martini, shaken not stirred.

This petulant, suffering, whimpering, girl interrupted wants to get back to her true love. With hilarious demonstrations of ineptitude, and utter lack of talent, she insists that she is a dancer.

Of course she doesn’t manage the intended escape and there is a lot of running up and down stairs to avoid her husband.

The five slamming doors are essential to farce and the brilliant set by Jason Sherwood  goes one better. Between those strategically placed doors is open space that allows us to see the six person cast madly shuffling about. To complete the illusion of a run down Victorian mansion there is the wonderful device of a hanging floor, set at an angle, suspended above the set.

To give the illusion of action on three floors and an attic there is an elaborate choreography of stomping feet. After a few such turns we get that they are scrambling up and down.

There are also lighting tricks by David Weiner and sturm und drang from sound designer Joel Abbott. It’s a dark and windy night in this old house where the roof leaks in the attic.

That's where the maid sleeps; or did until she just packed and quit. It is now used as a spare bedroom in a game of musical beds. The light switch doesn’t work and there is a running gag of characters slamming into a wall. They have to learn to make a dipping move to navigate into the bedroom which does indeed have a functional lamp.

The bonkers Roland has been renting the ramshackle edifice. His sense of interior design runs to variations of brown rooms. No wonder his wife is intent on leaving. But he actually wants to buy the house as a gift to his wife.

That brings us to his biker landlord Leslie (Matthew Greer) who is also a contractor and developer. There is sight comedy as he arrives like Darth Vader in helmet and leather gear having parked his Yamaha in the driveway.

Enter Tristram (Carson Elrod) with a briefcase of documents from the office of Roland’s solicitors. He is a very junior member of the firm as the others were not available. He is poorly dressed in a cheap, ill fitting suit and oversized gawky glasses. Just looking at him we burst into absurdist laughter.

Although cast in a minor role the brilliant Elrod gets most of the laughs. He can just stand still gaping at us and we are rolling in the aisles. Seemingly, his favorite piece on the chess board, Buntrock moves this pawn about brilliantly.

The final piece of the puzzle is Kitty (Helen Cespedes) the girlfriend of Mark who also wants out of her relationship. So there is a parallel plot point that connects her fate to that of Elizabeth. Not supposed to be there she gets stashed in the attic. When, for reasons that make no sense, Roland opts to sleep there she gets shoved into a closet crouched into a fetal position. We feel her pain.

When the deal get complicated Roland keeps foisting drinks on everyone and in the process gets utterly plastered topped off with a couple of his wife’s sleeping pills.

In a switcheroo it’s the nerdy accountant in his jammies in the master bedroom on a concrete slab as ersatz mattress. In a change of heart Elizabeth, dressed for sexcess, jumps under the covers and performs oral sex. Hilariously, Tristram assumes that he is being serviced by a ghost in the haunted house.

The clear light of dawn, however, reveals the truth and with the help of Mark has to wiggle out of her sleeping clutches.

But, that’s not all folks. There is more crashing and slamming about including another over the top sex scene. This time it is Elizabeth on the receiving end of the helmeted head of Leslie. With those strong dancer’s legs she has him in a hammer lock.

What Leslie finally pries loose, takes off the helmet, and stares out at the audience with a dazed what the heck look, there are gales of laughter.

None of this makes any sense, but frankly my dear, I don’t give a damn.

Well, tomorrow is another day at this old manse.

The play ends on a freeze-frame. And I don’t mean like the one is the J Geils song “Centerfold.”