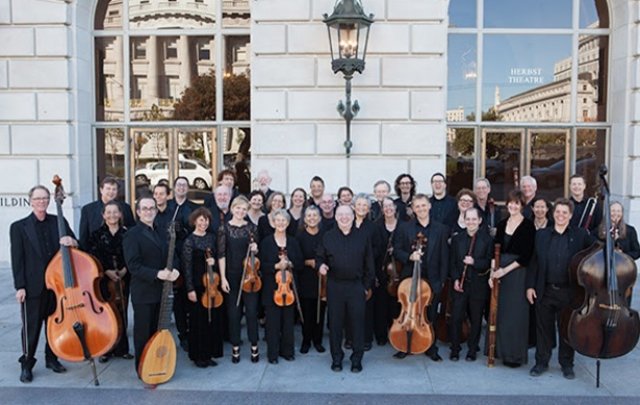 The Philharmonia Baroque Orchestra performed at Caramoor
When an arts festival goes through a major change of direction, there are always bumps and bruises. At Caramoor, which has operated on the Rosen estate in Katonah, New York for seventy-three years, those bruises are starting to show. There is a new artistic administrator on the campus: Kathy Schuman, formerly of Carnegie Hall. Gathering places and social areas are being renovated. And the festival's crown jewel, its opera series, has undergone the most rigorous change of all.

On Sunday afternoon under a threatening sky, the festival unveiled the first installment of a new initiative by Schuman, celebrating the art of baroque opera. This initiative replaces the much-loved, well-attended Bel Canto at Caramoor series, which exited after twenty seasons to a new home at nearby SUNY Purchase. For the first performance of this new series in the Venetian Theater, orange and white sails were put up in an effort to hide the fact that the theaters seats to the right and left were empty and unsold.

This performance was led by Nicholas McGegan and his San Francisco-based Philharmonia Baroque Orchestra. Atalanta, the pastoral opera written to commemorate the marriage of Frederick, Prince of Wales and son of King George II to a German princess. This is Handel the craftsman at his best, with enchanting melodies, cascades of inventive orchestration and vocal fireworks. However, the story's very nature as a ceremonial work handcuffed the librettist, producing a tepid story lacking anything resembling wit, satire or controversy.

Atalanta retells the mythic courtship of Princess Atalanta (Sherezade Panthaki) and King Meleagro (Amy Freston). They spend most of the opera flirting while disguised as shepherds. This romance is complicated by the presence of Irene, (Cécile van de Sant) and Aminta (Isaiah Bell), a secondary couple who mostly serve to run enough romantic interference to fill three acts. Not only is everything quickly and easily resolved by the arrival of the helpful and well-informed Nicandro (Philit Cutlip), but Mercury himself (Davóne Tines) shows up, not as a helpful deus ex machina but as an indication that the onstage wedding (and the royal one too) are blessed by the gods.

This flimsy plot serves as a wire hanger upon which some dazzling voices are hung. Preston has the most demanding assignment. Her part that was written originally for a castrato singer who could reach all the way up to a high C. She shared the stratospheric quality that is required, but seemed to run out of breath in the high corners of the score. Panthaki displayed a sweet tone and inviting voice to make Atalanta a more attractive figure.

In one respect, Atalanta is the most forward-looking of Handel's London operas. It includes not one but two duets for Meleagro and Atalanta: duets that let the two soprano leads combine their instruments and vocal resources to enchanting effect. The revolution led by Gluck and later Mozart was many years away but in these two numbers one had the sense that Handel was way ahead of his contemporaries and the constraints of the opera seria style.

As the jealous woman who thrusts herself between the two royal lovers, Irene is the most interesting character in this show. Indeed much of the comic weight of the third act came in the realization that she was falling in love with the Aminta, the only "real" shepherd on the stage. Their scenes together were performed with great tenderness. While the mezzo-soprano and the high clear tenor never quite combined, their interplay proved most enjoyable.

Conducting from the keyboard and leading the ensemble of instruments, Mr. McGegan reminded the listener why he is among the leading lights of the effort to produce Baroque music as Handel himself might have heard it. Also welcome was the presence of New York or a choral ensemble TENET, although their appearances were confined to only a few short scenes.
One hopes for success with this new initiative at Caramoor, but perhaps next time a more interesting opera will be selected. After all, Handel wrote enough of them, didn't he? (Reprinted with permission from Superconductor.)