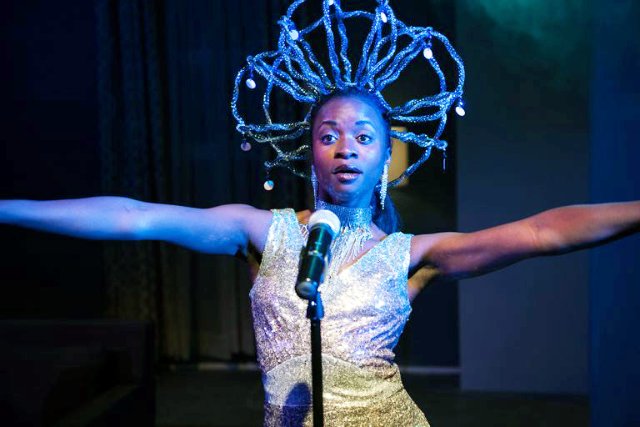 With the inception of legislated affirmative action in 1961, the calculus of racial relations in the United States forever changed. As elements of racial preferences and quotas were added, their existence divided the population. Economic theory suggests that at a macro level, inclusion of minorities will drive the entrenched population into equal or better jobs elsewhere, but social and economic conservatives see these programs as zero-sum games. And even if affirmative action benefits at the societal level, and hopes to correct egregious wrongs to minority populations, some individuals from the entrenched group suffer at a personal level. Based on a real life incident, the informal push for diversity or inclusion in the arts motivates James Ijames’s (pronounced I’ms) complex, provocative, and entertaining play White.

As an artist, Gus is accomplished enough to be on a funded fellowship. His white friend from college days, Jane, is a curator at a major contemporary museum. Although she admires Gus’s idiom of textured all-white painting, she tells him that she can’t include him in her New American Exhibition because he is a white man. Dismayed, he hires a black woman as a “front” to get his art accepted. From this juncture, White explores an endless series of issues concerning the intersections of race, gender, sexual preference, and art.

In a world of increasingly complicated political correctness, the playwright investigates not only cross-cultural behaviors but the motivations of those behaviors. Gus has an Asian boyfriend. Jane is trying to promote artists of color. But do those actions alone exempt them from an accusation of racism? Are they merely “racial tourists” who touch the boundaries of other races but lack real understanding of them? Do they suffer from a hermeneutical bind, unable to fully appreciate the depths of prejudice because they don’t walk in the others’ shoes?

And who gets to be included in the marginalized population?  Gus argues that as a gay he has suffered his share of discrimination. Although the overarching themes of the play are clear, unfinished and ambiguous tracts offer much nourishment for thoughtful discussion after the curtain falls.

While Ijames plumbs some of the most troubling problems of our times, he does so with masterful balance of angst and humor. Each of the three non-black characters has uncomfortable, grounded, and goofy moments. However, the most complex portrayal(s) come from the stunningly talented Santoya Fields, yet in the end, we really know little about the underlying character that she represents. As Vanessa, she is the African-American actress who agrees to be the putative painter of the art to be entered into the exhibition. Her acting chops (both Fields’s and her character Vanessa’s!) are revealed as she “auditions” possible personalities for the front before settling on the sassy, demonstrative, afro-coiffed Balconaé. Fields also has some delightful turns as Saint Diana of Detroit and the Patron Saint of Wayward Gay Men, Gus’s inner black female (?)!

A seldom examined theme that is manifest here concerns truth in art and the significance not of the work in its own right, but its importance because of its source.  Promoted as Bad Bitch Expressionism, does Balconaé become the proprietor of the art?  Consider historical misrepresentations of origin involving Shakespeare, The Monkees, Milli Vanilli, and most importantly, the authors blacklisted during the McCarthy era and their fronts.

Director M. Graham Smith’s wonderful production offers staging by a trio of the Bay Area’s finest designers. At the outset, Nina Ball’s set appears a disappointment, but we soon realize that the three giant, staggered white panels not only echo Gus’s painting style and the underlying themes of the white world, but they slide to reveal well conceived sets. Ray Oppenheimer’s lighting is sterling throughout.  In particular, the combination of lighting and set element in the last Saint scene, elevated and behind a scrim is beautifully conceived and executed, with a nod to Ulises Alcala’s costumery as well. As usual, Cliff Caruthers sound supports the action when you want it and is silent when you don’t.

Much more could be said about this profound work, but giving away much more would be unfair.

White by James Ijames is produced by Shotgun Players and plays at Ashby Stage, 1901 Ashby Ave., Berkeley, CA through August 5, 2018.