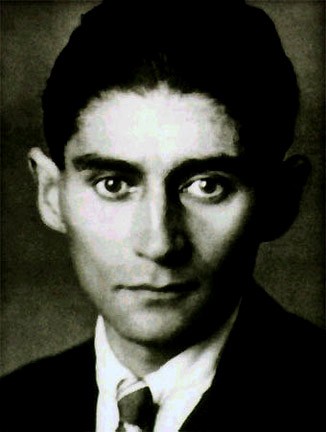 Franz Kafka was an unlikely source of inspiration for a comedy. 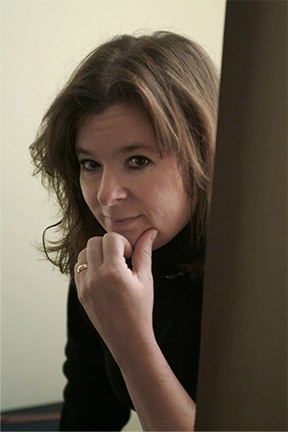 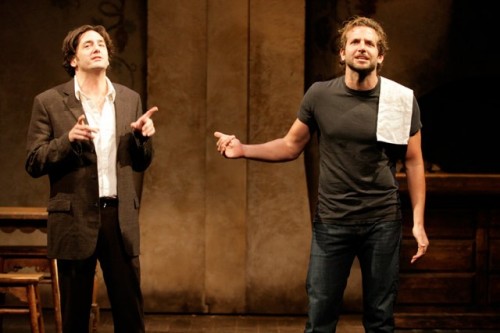 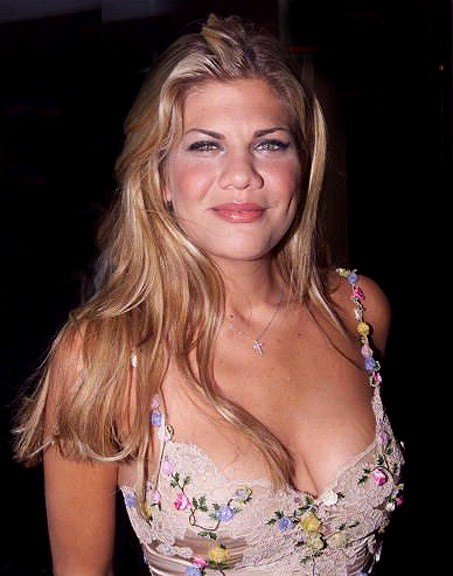 Kristen Johnston as the Stage Manager and love interest Roxanne. 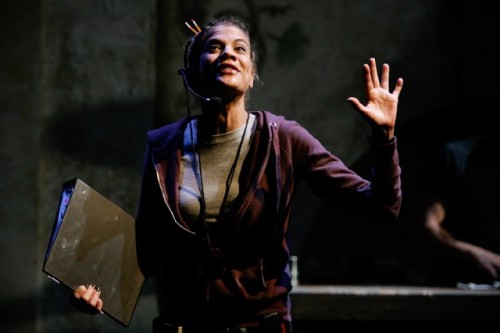 Roxanne is a tough Stage Manager. 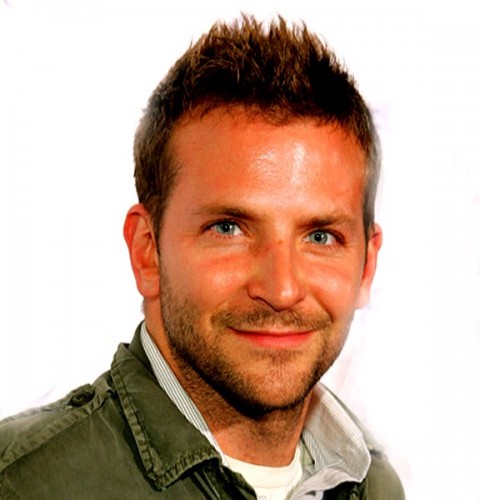 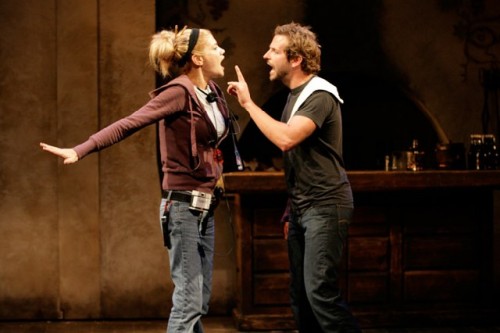 Roxanne and Jake in a tense exchange.

What's so funny about Franz Kafka? Well, a lot actually, in this brilliant play within a play and comedy by Theresa Rebeck. This is her fifth full length play and  second collaboration with the Williamstown Theatre Festival's artistic director, Nicholas Martin. While he was with the Huntington Theatre in Boston she premiered  "Mauritius" a rather involved, dark play about a rare stamp. It went from the Huntington to a successful New York run. Based on a terrific and hilarious premiere last night  "The Understudy"  also seems headed for Broadway.

In what is evolving as a remarkably rich season this is the second new work created for the Nikos Theatre that appears to have legs. The previous play "Broke-ology," by Nathan Louis Jackson, also premiered to pervasively rave reviews. Before that the fascinating "Atheist" as well as the musical "She Loves Me" on the Main Stage were productions that Martin took with him from his last season in Boston at the Huntington. The fact that WTF is again developing such strong original material is restoring a company that had declined over the past several years. Martin is putting a nice polish on the tarnished family silver.

The evening commences with the audience staring at a bare stage; actually, a fascinating simulacrum designed by Alexander Dodge. You have to look carefully to realize that this non set is actually an original creation. The Nikos is a brand new theatre. As such those radiators on the back wall are clearly fakes. But what an incredible trompe l'oeil. It was like looking at an enormous panting or relief sculpture. It  signified an attention to detail that pervades this production. It is significant that Dodge and WTF would go to the trouble and expense of creating an ersatz bare stage. Followed by several other set changes all of which were just incredible. In addition to the "bare stage" there were three other scenes evoking acts for the ersatz Kafka play. The stark, ominous Kafka sets were all the more ironic in the context of Rebeck's very unusual notion of comedy. The challenge is how to conflate the very serious with the rather absurd and make it all quite funny. It is amazing that Rebeck makes us laugh but also greatly respects Kafka. This is a remarkable accomplishment.

With frenetic energy Harry (Reg Rogers) burst on stage waving a loaded gun in a menacing manner. Suddenly with a laugh and shrug he slipped out of that character and into another as The Understudy who has appropriated the prop and arrived early for a rehearsal of a Broadway production of  a newly discovered play "The Castle" by Kafka.

We get a lot of amusing back story about how he came to be a down on his luck, talented, but failed actor. It seems that he auditioned but did not get a part in an action film. Apparently the role went to Jake (Bradley Cooper) with whom he is about to rehearse. Harry, of course, informs us that Jake has absolutely no talent. But he assures us he is "not bitter" about losing out on the role. Huh. We will later discover that Jake is a rather handsome leading man (the love interest of Jennifer Garner's Sidney Briscoe on the popular TV series "Alias"). While Harry is just another face in the crowd of unemployed actors. During a later dialogue between the two actors it emerges that Jake earned $2 million (which he says to an astonished, broke, desperate Harry "is not that much after you pay agents, lawyers and the IRS"). The star, Bruce, with whom Jake is paired in the Broadway version of Kafka, earns ten times that or $20 million per film.

The Stage Manager, Roxanne (Kristen Johnston)  establishes the pecking order. She equates the co stars as Richard III and Henry V and to Harry she states that "You are like the seventh spear carrier." There is more than a little vengeance in her humiliation. It appears that previously he jilted her and disappeared just two weeks before their wedding. She even has the dress in her closet.

Both Roxanne and Jake would love to dump Harry as a pesky trouble maker. After Roxanne makes a hasty call on her cell phone it seems that Harry had pulled strings and called in favors to get the job. As is typical in show biz being a friend of a friend got him an audition. It emerges that Roxanne, the tough as nails, and hilarious Stage Manager had originally aspired to be an actress.

What informs and drives this play is the clever multi-valent writing of Rebeck. The tensions and scrapping between the characters, their bare bones egos, is a vehicle for the playwright to discharge all the pent up frustrations of years of working with the theatre. The evening is laced with in-jokes  about the Broadway star system in which you can get the bridge-tunnel crowd to come see a three and a half hour Kafka nightmare if you dress the stage with bankable celebrities. Roxanne appears to be the voice of Rebeck when, at the end of the play, as things fall apart she blurts out "I hate the theatre and am never going to do this again." So, what else is new?

The irony is that there is no way in hell that Harry is ever going to sub for Jake. When and if that happens an angry and disappointed audience will demand its money back or the show will quickly fold. So it is not at all about a great production of Kafka for which, in real life, Rebeck has a great scholarly fascination. She holds a PhD in theatre from Brandeis University.

We see Harry rehearsed by Jake to mimic his interpretation of Kafka. Both actors deftly slip into character and give the evening another level of dimension. You long for the full three and a half hours of "The Castle" but have to settle for tantalizing snippets. Which is actually, believe it or not, quite funny.

Harry, as a serious and talented actor, in reality, a failed nobody, a spear carrier, wants to know his motivation for a scene. Roxanne screams at him to just imitate how Jake does it. That he is not getting paid to interpret the role. But Jake is  intrigued by how Harry wants to play the scene. Rather reluctantly Jake evolved to realize that Harry is a  talented actor. Probing deeper he wants to know about his relationship to Roxanne and how his career came to nothing. This develops into a mÃ©nage a trios as both actors have intimate moments with Roxanne which end in getting slapped. The difference, in a debate between the men, is when the slap occurred? Was it before or after the kiss?

Through all this the stressed and haggard Roxanne, clip board in hand, is running all over the stage, agonizing about scenes and props while yelling orders to the control booth. It's what Stage Mangers do and Johnston superbly, with enormous wit conveys that aspect of the theatre. She is furious when the actors eat the props (two bananas) or loose the gun. She rushes off stage to find the gun under a pile of Jake's "used underwear." There is a gag line about how hard it is to come by even a fake gun in the era of Homeland Security.

Overall, it is the riveting and hilarious performance of Rogers which carries this play. At every twist and turn he is phenomenal. He can evoke the most subtle nuance as he slips in and out of the many levels of this character. From his first moment on stage we feel fully engaged by him. He really reaches us as the underdog spear carrier with true talent. In an all too real simulation he has been ground up and spat out by the harsh realities of theatre. As an action hero, and pretty face, Cooper radiates the perfectly accurate low wattage of a minor star. It is impressive to see an actor move from the small screen to the challenges of live theatre. His performance here is way beyond the range of the bridge-tunnel syndrome.

The glue that binds this play is the role of Roxanne. She had poignant moments including a feminist rant about a lack of respect for women in theatre. She points out that the Kafka play, for example, has no women. And that Kafka disrespected his long suffering mistress but wove the later women, after he was famous, into his work. Is Roxanne the plaintive voice of Rebeck expressing the conflict of a love hate relationship with the daunting but fascinating Kafka. Does she long to throw a metaphorical apple into the side of that disgusting bug Gregor?  Why does Rebeck see the "Metamorphosis" as funny? It seems that the playwright is as complex as the master that revolts and inspires her. This is precisely why Roxanne is such a rich and meaty role. She may in fact be more interesting than Harry and Jake who are, after all, just guys.

While Roxanne has serious moments, mostly she is over the top and hilarious. We watch her charging all over the theatre just like a real stage manager. She extends the dimensions of the theatre and its actual space. But too often Johnston became, well, unglued. During an important exchange she lost her way and had to ask for a line. That unhinged her and Johnston stumbled through the scene unconvincingly. Perhaps it was opening night jitters or the result of the short rehearsal time of the fast paced summer season. But she recovered gamely and was mostly terrific in her role. One expects that the three actors will get their timing down with a few more performances. On opening night there were still some rough patches.

Then let's assume that it's on to Broadway and potential Tonys. Don't change a thing.  Hey folks, see it now before it slips away after an all too brief two week run.. What a great evening of theatre. Thanks WTF for bringing us such a fresh and lively new play. Bravo.