Opera Is Coming to Cambrige, NY

Rigoletto and Old Maid & the Thief at Hubbard Hall 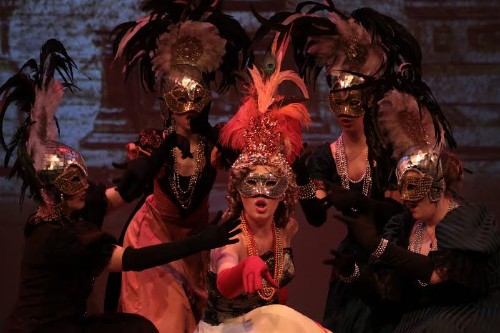 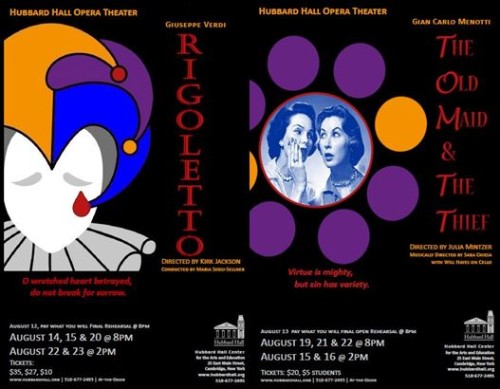 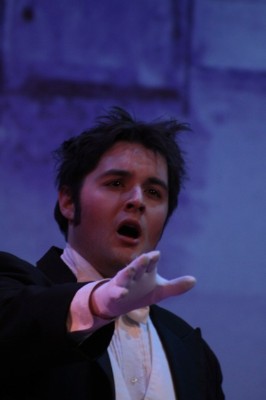 In its eighth summer season, Hubbard Hall Opera Theater (HHOT) presents Verdi’s masterpiece, Rigoletto- a tragedy of the first-order and a must-see on the level of Shakespeare’s Hamlet.

The performance will be directed by Kirk Jackson, a revered actor in his own right and resident instructor at Bennington College who directed Gianni Schicchi for HHOT last summer to sold-out crowds and rave reviews.  His verismo directing style is refreshing for audiences looking for an opera experience that is more than just spectacle.  Mr. Jackson will be updating this production to a 1930s circus which is a perfect fit for this tale of arrogant and corrupt power, off kilter love, and vengeance gone awry.

Question:  Rigoletto is opera at its darkest and best.  Coming from the theater world, how has preparing for this production challenged or inspired you?

Answer:  Opera is a challenge because it is so big- the overture, big voices all talking at once, grandiose music, those repeats that never would exist in a monologue.  At the same time, all these theatrical "problems" really can elevate the plot and allow the audience to experience it in a new way.  The overture provides a beautiful canvas to lay down the backstory through theater; the giant-sized voices can take your breath away when they drop to that pianissimo and really drive an emotion home.  The grandiose music provides a more palpable subtext that is obviously entirely in our heads in straight plays.  Those repeats, while challenging, are absolutely the best acting exercise in themselves- why does my character say this again? Yes, it is important, but it also illustrates how a thought process evolves.  All in all, the medium is just incredibly rich and it has been so much fun to explore.

Pittsburgh-based conductor, Maria Sensi-Sellner, who is the first three time winner of the coveted American Prize in conducting, returns to HHOT this summer to lead our 21 piece resident ensemble through one of her favorite operas which she says “is not only Verdi at the peak of his creativity but also a spectacular theatrical thriller jeweled with some of opera’s best loved arias.”

The Rigoletto cast is a star-studded ensemble featuring many up and coming singers with big credits to their names. Benjamin Bloomfield who served as a cover artist with the Metropolitan Opera in 2011 and with the New York City Opera in 2012 will lead the cast in the title role of the cursed clown. Christopher Lucier who has been praised as a “stand-out” tenor by the New York Times, and who performed a stunning rendition of Alfredo in La Traviata at Proctors with HHOT in 2012 will return to sing the philandering Duke in this production.  Completing the triangle of misguided love is Meghan Picerno, whose “attractive soprano voice” has been lauded in the New York Times, and who will be making her role debut of the innocent Gilda here after competing as a finalist in London for Placido Domingo’s prestigious international Operalia competition.

Running on alternating nights and doubling up on Saturdays with Rigoletto is Menotti’s Old Maid and the Thief presented with piano and cello in English and running just over an hour:  a perfect complement for new audiences who want some lighter fare.  Menotti, who is best known for Amahl and the Night Visitors, had this work commissioned as a radio play for NBC, so the music must tell its own story.  In this dark comedy, a lonely woman and her equally lonely housekeeper struggle to conceal an innocent hitchhiker (whom they believe is a thief) in order to keep him safe from the authorities.  In their quest to entertain their guest and entice him to stay the two desperate ladies ultimately become thieves themselves.   Director and mezzo-soprano Julia Mintzer elaborates, “Old Maid presents a cast of quintessentially American small-town characters each struggling to carve out a piece of happiness any way they can”.   Mintzer, who has just returned to the States from a two year contract with the Semperoper Dresden cannot think of a better setting for this than in the real life small-town of Cambridge, NY.

Question:  Ms. Jones, as Artistic Director, it seems as if you are choosing a “starter piece” as part of your program (Old Maid), paired with full on, perhaps more intimidating opera (Rigoletto).   This method seems to have really allowed opera to take root in Cambridge.  What has been your favorite part of watching this program grow?

Answer: When I talk to younger audiences about what they perceive opera to be and what would get them in to see a show they often ask for shorter pieces, something in English, cheaper ticket prices, something they can wear jeans to… I usually just say welcome to Hubbard Hall.  Here you find everything you never expected opera to be.  And you know what?  They like it and they come back for more, sitting there right next to the farmer from Shushan on one side and the culture-phile from Manchester on the other, watching people not too much older than themselves accomplish some amazing artistic feats so close they can see the sweat, spit and tears and feel the moving power of a live orchestra not twenty feet away. I like watching that ah-ha moment and knowing that it was our program that got them there.

The Hall seats not more than 120 people and tickets may be obtained in advance by visiting www.hubbardhall.org or by calling 518-677-2495.