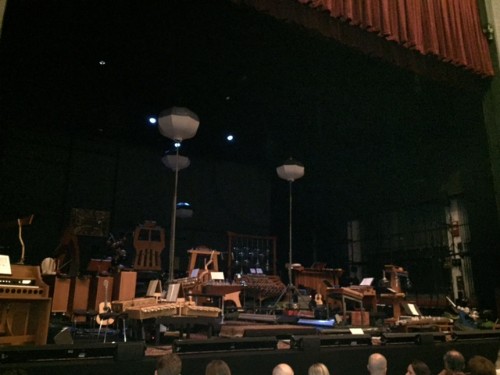 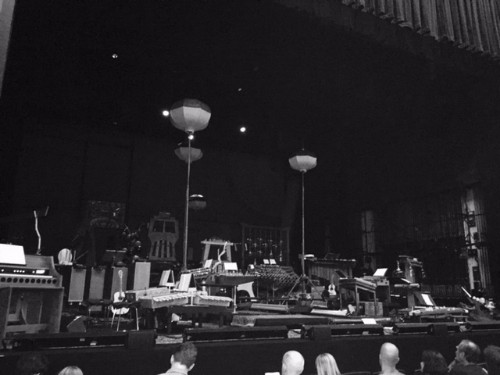 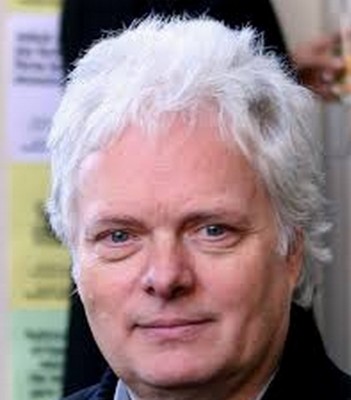 Heiner Goebbels, director of Delusion of the Fury 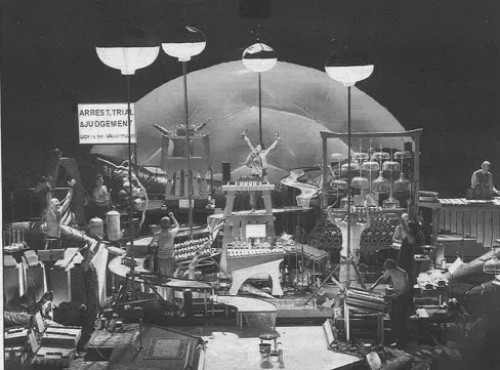 Entering City Center where the Lincoln Center Festival presented Delusion of the Fury, Harry Partch’s iconic musical drama, the stage is filled with a wide range of instruments, many as beautiful as objects on display in a museum.

But these are not lifeless objects. They are made to produce a wide variety of sounds: some are bell-like and produced by the striking of glass and brass. Others look like models for Georgia O’Keefe.

Musicians, having memorized their scores, are free to move about the stage as the sections of the drama enfold. They participate in the offering, often singing as well as playing their instruments.

The Beatles arrived on the Ed Sullivan Show in 1964. Partch wrote Delusion in 1965. He was interested in combining pop and classical culture.  Delusion of the Fury successfully does this.

Act One is tinged with Japanese Noh drama, but Partch notes, no, it is not Noh. Only the spirit of Noh: the release from the wheel of life and death. Act Two is based on an Ethiopian folk tale. Partch says he is now treating life and life despite life. Although he uses irony and percussion, they are not African at all, but very American, Partch notes.

Thoughtful people concerned for the future of serious music should look hard at Partch. Decades before the Fishers made the musicians into actors in Budapest, Partch was presenting music in a form which was not designed to appeal to contemporary audiences but clearly does.

Partch asked why musicians were allowed to be tied to the book? Shouldn’t they memorize their scores the way actors memorize their parts? The white manuscripts in bright lights did not appeal to Partch. Much of Delusion was presented in darkness. The instruments are featured.

Nowhere could I find a mention of the whale-like, or elephant trunk-like balloons that were featured on both sides of the stage. They were grey and their surface was sometimes mottled by spot lights. They disappeared as suddenly as they appeared and were not on stage for examination at the end of the work's presentation. Mysterious. A small guilty pleasure in a moving evening of pleasure. Where did the water on the stage come from?

Director Goebbels has said, "As a spectator, I enjoy most when I cannot trust what I see.”   He also speaks about seeing something you could not imagine before. His rendition of Delusion is jaw-dropping.

When asked at the time of his Geneva production of the Partch how he differed from the composer’s vision, Goebbels spoke about adding lights and not limiting himself to the musical instruments as the scenery. Bringing humor to the piece, as well as Partch's intended irony, is also an addition.

This production is theatrical. Partch as he finished his work said, “I could no more become a writer of acceptable concert music than I could become an acceptable kangaroo.”  His 43 tone scale and all his marvelous instruments suggest music as theatre and the future. All symphony orchestras regularly produce opera today. Can Partch be far behind?