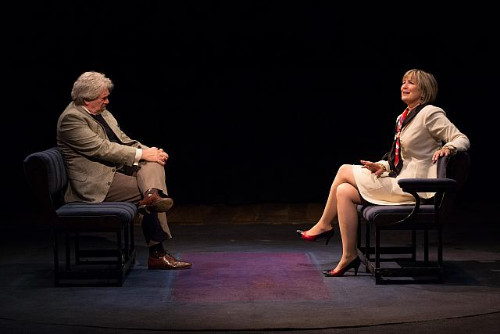 The Man (John Woodson) and The Woman (Corinna May) photos by Enrico Spada. 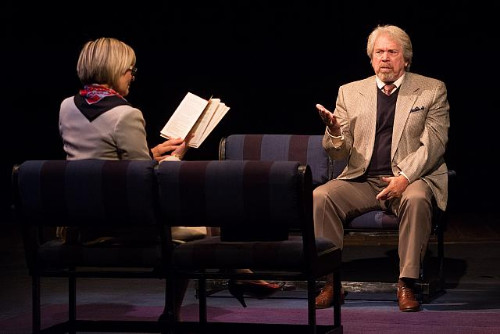 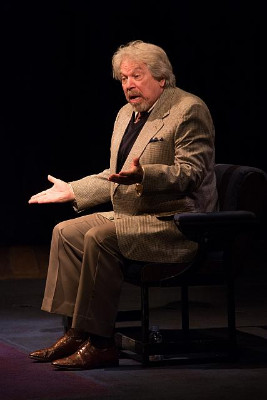 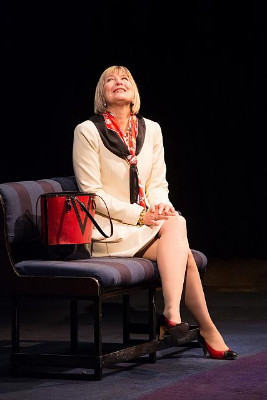 It is hard to imagine a better production of The Unexpected Man that opened last night at Shakespeare & Company and runs in rep through September 6.

But is that enough?

The award winning French playwright, Yasmina Reza (born 1959), wrote it in 1995 a year after the great success of a minimalist, three character play Art. Her greatest success, and most recent of seven plays, God of Carnage, ran the table in regional theater after opening in London in 2006 and winning a Tony for best play in 2009.

Wordy, sparse and demanding this play is closer to the intellectual debates of Art than the volatile and more amusing shenanigans of God of Carnage.

No tulips go flying in this drama of distance and restraint between the Man (author Paul Parsky) and the fan of his writing Woman (Martha).

He, lost in thoughts about all aspects of bitterness, and She, befuddled about whether to speak to the man she deeply admires, had a lot to say. Just not to each other. For most of the play they took turns delivering monologues.

During the often enervating 76 minutes, snipped from travel between Paris and Frankfurt, they are aware of each other but for different reasons fail to interact.

If that kind of tension intrigues you then by all means see this play.

Under the skillful direction of Seth Gordon they never get off their seats in another set as non set this time by John McDermott.

The company used to be known for bare pipe productions of the Bard. This season, in a development which may be viewed as either daring and bold or simply coast effective, the company has opted for no sets. That is done rather cleverly in Henry V with manipulation of props but here there are none.

Unless you factor in the carousel which now and then revolves to offer a variety of views for an audience seated on three sides. That is, indeed, the action for this otherwise stridently static play.

Please note in passing that the company has blown through two, full time, artistic directors in the past year. This kind of muddle appears to be the result.

Don’t get me wrong. The performances by Corinna May and John Woodson were truly magnificent. As the world turns.

They were perfectly dressed by Stella Schwartz. The woman congratulates herself on the choice of an elegant, cream colored, finely tailored suit for this serendipitous encounter with the man she admires and fantasizes about. She has a smart cut for sculpted blonde hair. There appears to be no ring on her finger but we learn little of her private life.

Based on the self absorbed, nasty drift of his sharp comments on friends like Yuri and aspects of the literary life that is now ending with his latest and last book, for all of his success he is, well, a total jerk.

In contrast to a nasty persona, learned through his reflections, she endows her understanding of his work with depth, sensitivity and insight.

Like a moth to a flame too often women attracted by men of genius get torched. It is best to admire a great man from a safe distance.

This is the essence of concerns about revealing herself to him. She has the latest book in her bag and agonizes about whether to read it in front of him. He, on the other hand, wonders about this woman on a long train ride with nothing to read.

Gradually they take a stronger interest in each other. Their eventual interaction takes comic turns.

With a richly resonant voice, subtle movements and inflections John Woodson is an actor we hope to see more of at S&Co.

The actors and all involved with the production are richly to be applauded. Surely this was as demanding and difficult for them as it was absorbing for the audience.