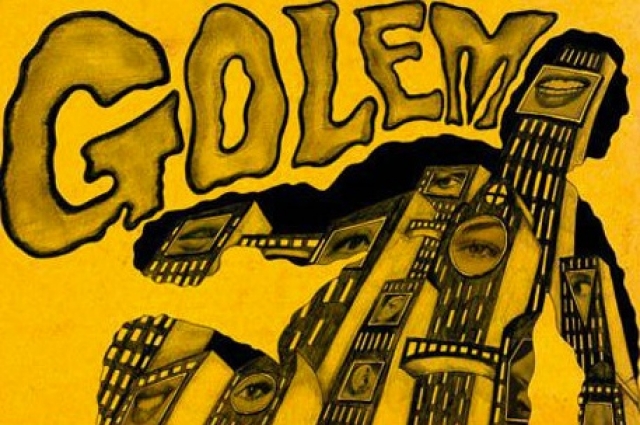 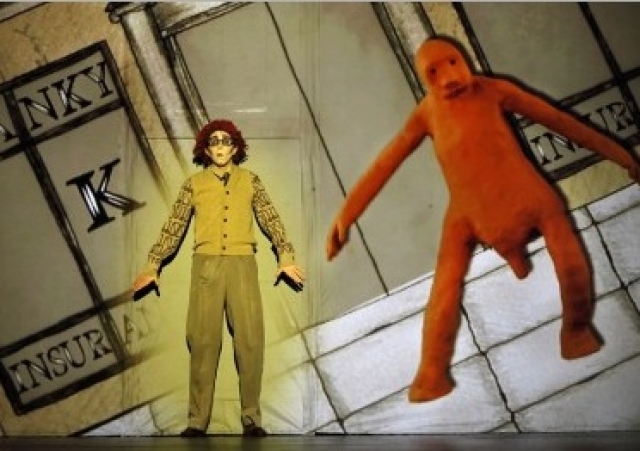 Robert Robertson and Golem One. 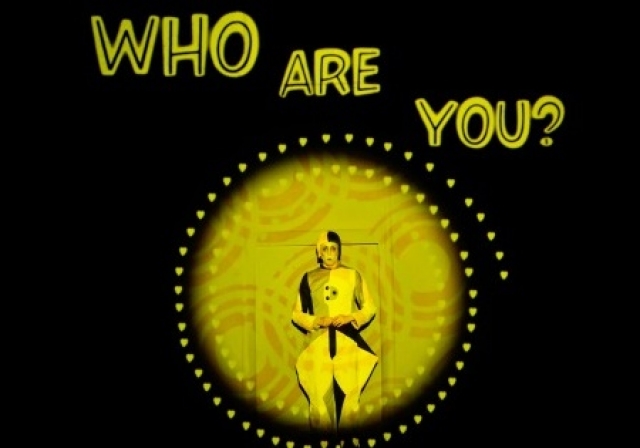 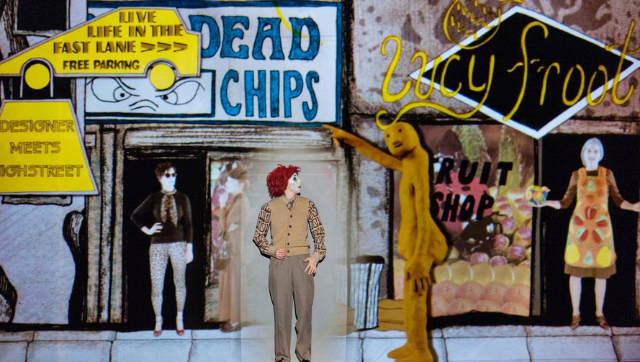 Golem One points the way. 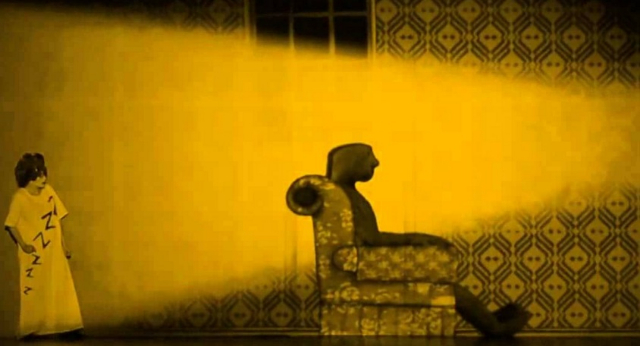 The Golem relaxes watching his hero, Benedict Cumberbatch, on TV> 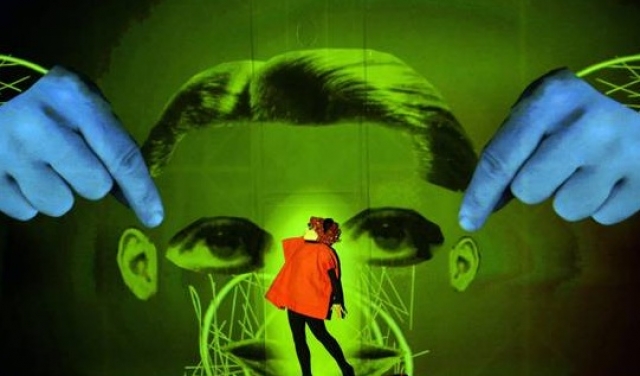 Man haunted by a dramatis personae and manipulated. 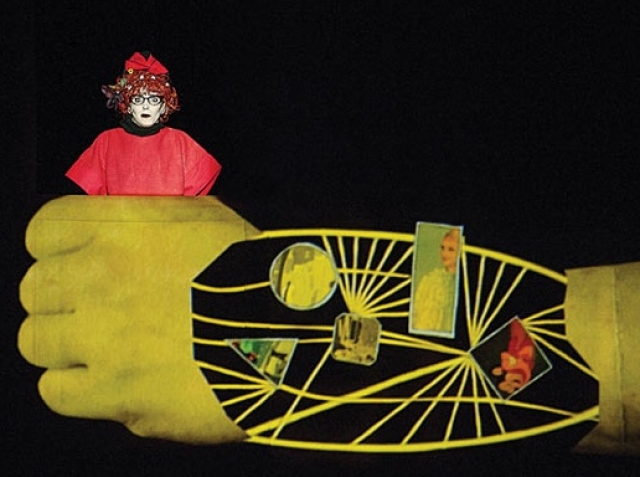 Whose grip are we in?

Golem is a very stylish piece, at once tongue-in-cheek and sober. Work is attributed to several collaborators, but it has unity. This is a particular triumph since Klee, Dali, Walter Keane, line-drawn black and white cartoons, Charlie Chaplin's tramp, live percussion and piano, animation and delightful Iris Wipes are all deployed.  Iris Wipes, where the circle gets smaller and smaller, hark back to Buster Keaton and the Merrie Melodies cartoons. 1927 uses them to great effect.

Based loosely on the 1913-4 serial articles of Gustav Meyrink, published in book form in 1915, The Golem was Meyrink's most successful book. Animator and designer Paul Barritt says that it was his jumping off point.  He tried to capture the work's hallucinigenic quality, but dropped the story details.

The Golem, though rarely seen in the novel, is representative of a ghetto's spirit and consciousness. He is brought to life by suffering. 1927's new Golem, in three incarnations, captures the gestalt of those around him, as they struggle to work, play and mate.  After incorporating this idea, the production flies off into space.

The new Golem is cast as a sort of gestalt entity, a physical manifestation of our collective psyche, our "self."

Golem One looks part Botero figure in the lobby of the Time Warner building, where kids play with the tiny penis all day. Golem 2 is more like Chaplin in a Saint-Exupéry aviator outfit. Golem 3 is an amalgam of all the visuals we’ve seen.

Although this theatre troupe started in cabaret, this is hardly something you’d find in Moulin Rouge, where they Golem suggests going. They are seasoned actors, who often capture and freeze expression and gesture to emphasize a point, or to collaborate with the animation going on behind them. The tiny, rapid steps that accompany a rushing street scene are both reminiscent of Chaplin’s Tramp and very personal.

What role does music play? The composer Lillian Henley is tucked into stage left on a keyboard instrument. The percussionist is stage right and bounds up to become part of the action in various roles.

The music is plain and repetitive, yet its buoyant presence is unifying. So too the cameo Iris wipes, and the characters.  A depressed punk band, the women provided by a post modern Match.com,  are among the constants of the presentation.

While Chaplin’s motions can be robotic, 1927 takes the idea of robot a step further. It is not machines that have taken over the world, but your Robovac. Golem 1 offers to clean but we do not see him in action.

Who gets fair shake in this world? In human terms, the manager. Robert Robertson, our hero, aspires to a managerial role and finally ascends to it. A thankless, uncreative role it is.

Like Chaplin, and that’s saying a lot, this troupe can tackle monumental subjects with infinitely detailed and satisfying gestures and phrases. Clichés are abundant, but sound more like Lewis Carroll and Edward Lear in the hands of Susan Andrade, who directs and writes the material.

Visuals explode before our eyes. A face as dramatic mask is constructed and deconstructed from its elements, the brows, the eyes, the lips.

Shamira Turner as Robert stays at the heart of the drama in a touching performance. Even Golem 1 and 2, the big Botero and the little dictator, earn their place in our imaginative inclusion of the drama's characters.  Golem is a tour de force, delivered with grace and bemusement.