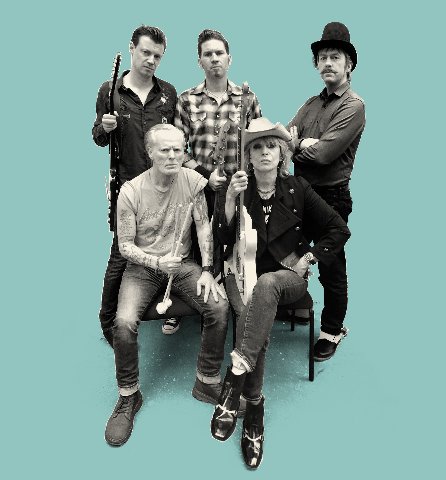 It was standing room only last night for the packed performance of Chrissie Hynde and The Pretenders. On a perfect summer night, with just a touch of heat relief, they performed on stage in a large courtyard of MASS MoCA.

With my buddy Andrew we were on our feet up close and personal from 8 PM to close to 11 PM. That’s tough on old bones and only for you Chrissie.

The band went on at just after 9PM and until 10:40PM delivered what will surely be recalled as a legendary Berkshire’s rock event. Parking was tough as MoCA yet again demonstrated that it is as much a performance venue as museum. It draws large, enthusiastic and separate audiences.

Numerous times during the set Hynde referenced MoCA as “a great venue” and personally thanked director Joe Thompson for organizing the event. Referencing the museum she commented that it had both great and not so great works of art.

Today she discusses her autodidactic paintings with Thompson.

Noting that this was the only North American concert this summer she added that it may even be the last. “Wouldn’t that be special” she commented adding that it’s not likely to go down that way. She assured us that the band was great and that they love to play. Ending the evening she promised to be back. Let’s hold her to that.

With an easy and fluid demeanor Hynde rocked. She is unusual for a female vocalist as she also plays guitar. She strapped on a range of Fenders one of which, a favorite, came crashing down. It was quickly replaced but she rendered a soliloquy on the mortality of flesh falling off bones and the longevity of forty year old guitars.

As an instrumentalist she has a soft touch with the pick. The sense of rhythm, accent and timing was impeccable. She occasionally strummed through tunes unleashing a torrent of searing notes from the lead guitarist James Walbourne. The quintet of British rockers included Nick Wilkinson bass, Carwyn Ellis keyboards, and Martin Chambers drums. There were shifts of style and tempo from pop hits to reggae and a Bo Diddley riff.

Up close it was intriguing to observe how she achieved her signature wavering vocals. There was considerable range to how she sang. With the equivalence of bluesy vibrato she manipulates her jaw to provide quavering, moaning, overtones. It’s a touch unique to her.

Occasionally, she set aside the guitar to sing and dance. Late in the set the band departed and she offered a heart wrenching tribute to her friend K. D. Lang. There were women near me singing along. Up front there was a cluster of fans that Hynde noted, thanked and interacted with.

With some introspection and melancholy she expressed misgivings about being unique on stage. She asked if anyone out there was a waitress. Then noted that she was and didn’t want to be. Told that she couldn’t be a guitarist she said “Fuck it” becoming one anyway. To the women she taunted “Why don’t you learn to play f’in guitar?”

She was frank in expressing soft inner being under tough thick skin. A native of Akron, Ohio (born 7 September, 1951) she attended Kent State during the troubles. Defecting, she became a part of the London punk rock scene and broke out in the mid 1970s.

After MoCA the band is flying home to London with a string of gigs. She mentioned a number of her women rocker friends but said that Meghan Markle told her not to name drop. Reaching into the top of her t-shirt she pulled out what appeared to be a hand woven choker. “You have to be a great friend of Stevie (Nicks) to get one of these.”

Tall and lanky, with a shag of dirty blonde hair, there were indications of wear and tear. The hints of agita testify to a rocky road leading to fame and fortune.

It’s the edge that informs the music as she belted out anthems like “Talk of the Town” “Back on the Chain Gang” and other megahits. Introducing “Stop Your Sobbing” she described Ray Davies of The Kinks as the greatest living songwriter.

During encores she had an odd discussion with the audience about waving along with “I’ll Stand by You.” Noting that it is a cliché of audience participation she expressed ambivalence and that she might not cooperate. Then she led us through it as looking around thousands of fans were waving their arms.

Landing in Boston for the scenic drive to the Berkshires she quoted some in her entourage asking if they would be in “Red neck country?” She disabused them of that but pointed out her red headed Welsh keyboard player. He was asked to say something in Welsh which he did.

Mostly Hynde and the band conveyed that they were having fun. Acknowledging an encore request, with sarcasm, she stated that they would play it because “We are here to please you and not ourselves.” Thanks for that and y’all come back to blue neck country.