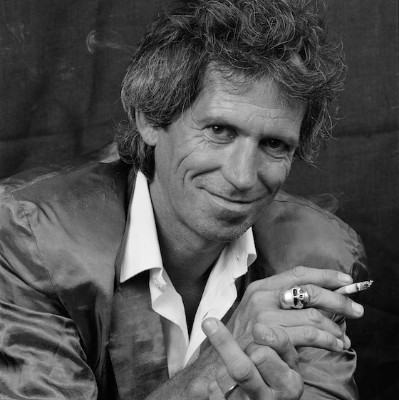 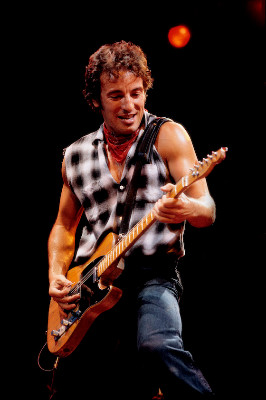 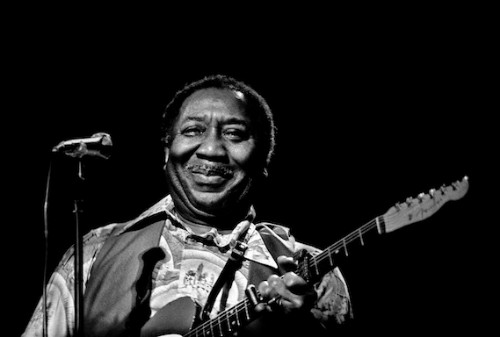 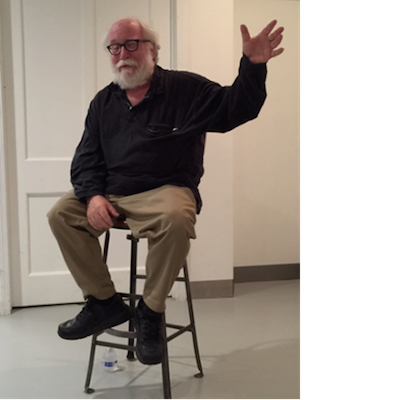 Paul Natkin sat on a stool Saturday and told us about his life for an hour. His life as a rock and roll photographer, shooting concerts and backstage portraits and touring with some of the iconic rockers of the 20th century. Then he said, "Yesterday I shot eight basketball games and I have two to shoot tonight after I leave here."

That's the arc of Natkin's life and 40-year career, as he told his story surrounded by his "Superstars" photography, now on exhibit at the Ed Paschke Art Center in Jefferson Park.

His early commercial work was shooting sports events, and he happened upon his first concert gig by accident as he was leaving an assignment in Evanston one night in 1976. He remembered reading that Bonnie Raitt was playing nearby so he got his gear out of the trunk and headed for the concert, where he talked his way in without a press pass. The pictures were terrible, he remembers, but that was the beginning of his career as a music photographer.

Natkin went to the University of Illinois at Chicago but had no formal photography training. However, his father, Robert Natkin, was a well-known Chicago photographer, official photographer for the Chicago Housing Authority and later for the Chicago Bulls. He taught his son the techniques and the ropes. When his father came home after shooting his first Bulls game, he told his son about the perks. Free parking, free admission and the best seats in the house! That's when Natkin decided to become a sports photographer. He shot for the Bulls for about five years and then decided he could translate his work into his love for music.

He knew nothing about the business of commercial photography, he says, and learned about it in bits and pieces. He learned to make contact with concert promoters in Chicago, like Flipside Records (it no longer exists) and Jam Productions to get concert assignments. Later he made contact with the editor of Creem, probably the first US rock magazine, and that helped him expand his contacts.

"I had to learn everything about the business," Natkin says. "I didn't even know how to submit a photo at first." One thing he learned early on, however, was to keep control of his photographs by never signing over the copyright to buyers. He would license photos for use by publications, publicists and record companies. "That's how I built my legacy," he says, because every time a photo is used, he's paid a fee for it.

As his reputation grew, publicists would call him to shoot their bands. He told about shooting Bruce Springsteen in Minneapolis on his Born in the USA tour for a Newsweek cover. That shoot was described in a story about Natkin in the Chicago Sun-Times. "That's when my family believed I was a real photographer," he said. That publicity also led to five years as the staff photographer for the Oprah Winfrey Show.

June of 1984 was a particularly great month. In addition to the Springsteen shoot in St. Paul, he photographed Prince's birthday party in Minneapolis, and the start of the Jackson 5 Victory Tour in Kansas City.

Some of his favorite experiences were going on tour with Keith Richards in 1988 and spending three-and-a-half months on the road as the tour photographer for the Rolling Stones' Steel Wheels tour in 1989 and for Stones tours in 1994 and 1997.

"One night," he says, "I found myself playing pool. Me and Keith against Eric Clapton and David Bowie. They won."

The concert years were very busy for Natkin. "I shot five nights a week, 52 weeks a year, sometimes three or four shows a night," he says. By this time, his work was in demand for album covers and music magazines like Creem and Rolling Stone, as well as mainstream magazines like Time, Newsweek, Playboy and Ebony.

Natkin still works regularly, but his assignments have changed as the photography business has changed. With digital photography, "everyone thinks they're a photographer," he notes. Also concert promoters now restrict photographers to shooting only the first three songs of a concert, which Natkin ridicules as the most boring part of a concert.

He's digitizing all his work now, gradually working his way through 14 file cabinets of slides and contact sheets, "from Abba to ZZ Top." His work is available through Getty Images and in the Morrison Hotel Gallery.

Natkin also writes a blog, in which he comments on various aspects of photography and the music business. In one of his recent posts, he critiques Taylor Swift's treatment of photographers, point by point. He did the same critique with the Foo Fighters' contract.

Natkin answered questions for another half hour. He acknowledged audience members such as photojournalist Marc PoKempner and Doug Sohn of Hot Doug's fame.

The exhibit, Paul Natkin: Superstars, continues through August 2 at the Ed Paschke Art Center, 5415 W. Higgins Ave. The center is open 10am to 7pm seven days a week and admission is free. For more information, call 312-533-4911.