The Nance at Pride Arts Center

Evoking an Era of Burlesque 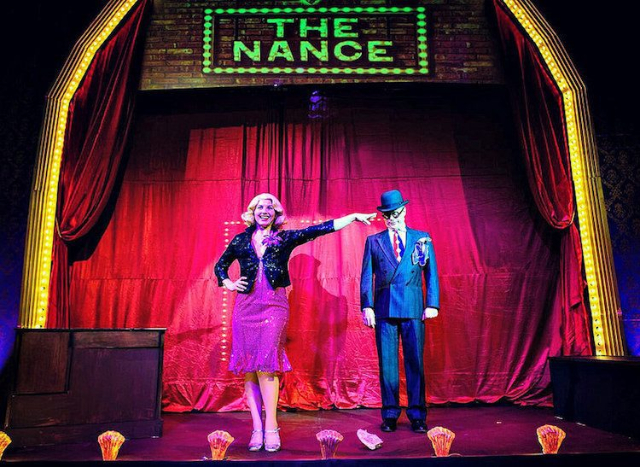 Sivertsen and Kracht on stage at the Irving Place. Photo by Paul Goyette.

The play opens with a bubbly Sylvie (Melissa Young) singing and dancing to “I Wish I Could Shimmy Like My Sister Kate” on the stage of an old burlesque theater. That number sets the time (1937) and the scene for The Nance, which is both an uproariously silly set of burlesque acts, antique in their humor, and historic reminders of how we got to where we are today in terms of sexual repression and artistic censorship.

Douglas Carter Beane’s play, now on stage at Pride Films and Plays, is the story of Chauncey Miles (Vince Kracht), a gay man who plays an effeminate man on stage (the “nance act”), which was acceptable in the 1930s, while actual homosexual behavior was outlawed. (It remained illegal here until 1962, when Illinois repealed its sodomy law, and during the 1970s and later in other states.* Some states still criminalize homosexual acts.)

Once the nance act becomes risky because of the attention of the city’s licensing commissioner, there is another way for Chauncey to perform, as one of his colleagues says. “Oh, but get this – he can do a drag bit. ‘ Cause drag ain’t deviant, it’s ‘masquerade.’” (Both Mayor Fiorello LaGuardia and license commissioner Paul Moss get shout-outs in The Nance. LaGuardia shut down the burlesque houses for a brief time in 1937, upon Moss’ recommendation. And the dancers report that Helen Hayes speaks against censorship at a protest rally.)

The burlesque acts at the Irving Place Theatre make up almost half of The Nance, which is riproaringly directed by John Nasca. You’ll see a feathery fan dance by Joan (Britt-Marie Sivertsen) and other songs, dances and modest strip routines by Sylvie and Carmen (Steph Vondell). The women’s costumes are colorful and sparkly—and designed by Nasca, doing double duty as costume designer.

Efram (Patrick Rybarczyk) is the First Banana of the burlesque show. He and Chauncey riff off of each other in the comedy numbers that bracket the dance acts.

The play’s story line is about Chauncey’s career problems plus his romantic relationship with young Ned (charmingly played by Royen ), who becomes a performer at the as well as Chauncey’s soulmate. A few scenes are played at a Greenwich Village Horn & Hardart’s Automat, which was notorious as a place where men could (cautiously) meet other men.

Nasca’s direction keeps things moving briskly; the 2.5 hour play rarely drags. Scenic design by Jeremy Hollis outfits Pride’s stage as the theater and Chauncey’s apartment with the movement of a few furniture pieces and a projection screen above the stage, which identifies the location or the song being performed by the burlesque cast. Live music, directed by Robert Ollis, enhances the burlesque mood.