Our Town at Williamstown Theatre Festival 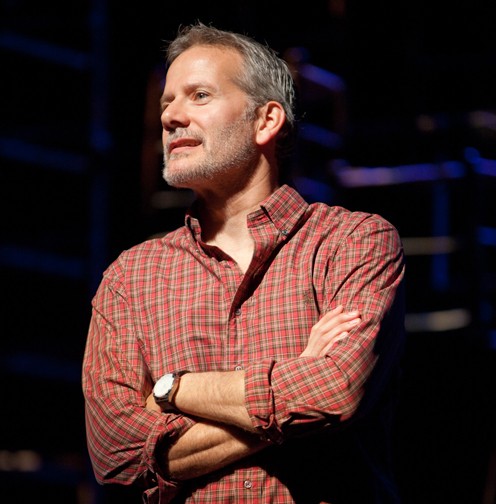 Campbell Scott is superb as the Stage Manager. WTF photos. 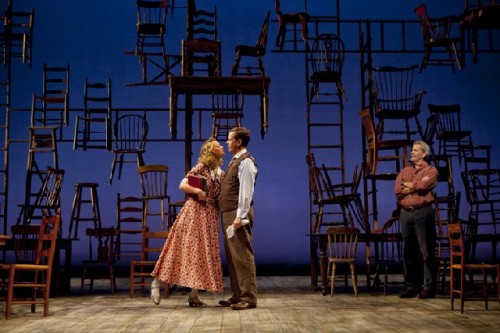 This scene between Emily (Brie Larson) and her dad (Dylan Baker) reveals that odd construction of chairs designed by David Korins. 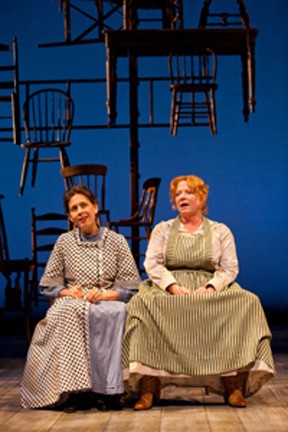 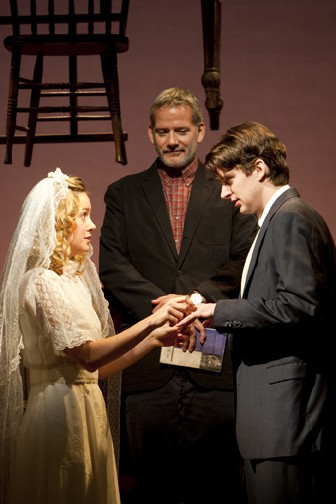 Emily and George (Will Rogers) getting married. 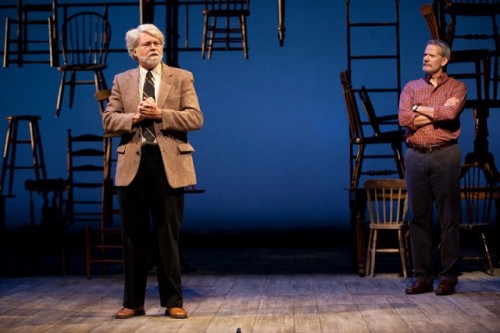 Williams professor Sam Crane got a huge round of applause for performing Professor Willard.

“I believe Our Town to be the greatest American play and want to bask in its affirmation of life. In this respect directing it is a selfish move. In a loftier sense, I want to give Williamstown, which has been such a happy home to me, a play of resounding, if understated, eloquence which evokes the spirit of New England and Wilder’s attempt ‘to find value above all price for the smallest events of daily life,’” Nicholas Martin, artistic director of the Williamstown Theatre Festival.

For his final production, during a challenging three year tenure at the Williamstown Theatre Festival, Martin wanted to do something special. To leave an indelible mark on his legacy and the formidable tradition of one of the nation’s most renowned, regional theatre festivals.

The dialogue about wanting to present Thornton Wilder’s `1938, Pulitzer Prize winning drama started last summer in conversation with Dylan Baker and other actors in the WTF family. It hinged on casting Campbell Scott in the pivotal role of the Stage Manager. Once that was affirmed last February the pieces of the puzzle fell into place with an all star cast including John Rubenstein (Doc Gibbs), Becky Ann Baker (Mrs. Gibbs), Dylan Baker (Mr. Webb), Jessica Hecht (Mrs. Webb). Martin found superb emerging actors Brie Larson (Emily Webb), and Will Rogers (George Gibbs) for the juvenile leads. Combining Equity and Non Equity players many local citizens were recruited with some 40 individuals on stage.

An actual professor Sam Crane, from Williams College, performed as Professor Willard. It seems that the audience was stacked with his friends and family. There was applause when he appeared on stage as well as at the end of his brief speaking role. In that sense this production of Our Town was a great example of community theatre. That is the norm of how it is frequently presented. It is usual to cast amateur and college actors who are just being themselves. Other than the crucial Stage Manager the many roles in the play are not particularly challenging.

Wilder’s play was boldly experimental for its era; even avant-garde. It had the ambition of reinventing American theatre. Starting with a mostly bare stage where the Stage Manager asks us to imagine the apocryphal Grover’s Corners, New Hampshire. He informs us that it is located 42°40' north latitude and 70°37' west longitude. Those coordinates actually place it closer to Rockport, Mass.

During act one “Daily Life” the Stage Manager measures out the homes of the Gibbs Family and that of the Webb Family. This occurs in front of a complex, multi leveled construction of sturdy, wooden, New England inspired chairs. During intermission there was lively discussion of just what David Korin’s post modern design implied. One Wag commented “I came expecting Wilder and ended up seeing Genet.” I interpreted that the assemblage of chairs signified the citizens of the bucolic hamlet.

Other than all those piled up chairs a trope of Our Town is that there are few if any props. The actors mime their daily functions of cooking, eating, driving horse and wagons. A plank, supported by two chairs, becomes the soda fountain for a crucial love scene between George and Emily. In one of many roles the Stage Manager slips into making their drinks.

There is the passage of time between the first act and the second “Love and Marriage” and another leap forward to the final act “Death and Eternity.”  These transitions are nicely indicated in the lighting designed by Kenneth Posner and the musical interludes of Michael Friedman. There is an enormous moon to indicate evening. In the riveting cemetery scene, after the mourners leave and night descends, there is  a moody indication of the stars.

If Martin believes that this is indeed the greatest American play he has pulled out all of the stops to make that point. One could not imagine a more compelling and spotless production of Our Town. Start with a truly warm, rich, nuanced and galvanic lead performance by Campbell Scott. Add to that the superbly crafted work of Jessica Hecht, Becky Ann Baker, Dylan Baker and John Rubenstein. In an elite all star mix the young actors Will Rogers and Brie Larson are just delicious. And let’s hear it for all those kids and local citizens who brought out the magic of this rural community.

This is a stunning production and triumph for Nicholas Martin. It is typical of his approach that the whole, the ensemble of some 40 actors on stage, is more than the sum of its parts. It is a tribute to how much he is loved and respected that so many superb actors gave their hearts and souls to their roles. Of course the glue that holds it all together is Campbell Scott. Other than Wilder himself, who played the role in a 1959 WTF production, Scott may be the definitive Stage Manager.

That said I have many issues with the play. It is hard to accept this benign view of America. Yes, Wilder strove to be life affirming but it is not an accurate view of the period. There is just a tiny hint of adversity and hard times. An actor charges up the aisle in protest of social and political conflict. The Stage Manager is surprised but the protestor skulks off. That’s as far as the play gets into dissent.

Martin has opted to tread lightly with the circumstances of the era. A promising lad lost his life fighting Germans. The Stage Manager can’t quite comprehend why a kid from New Hampshire has a beef with a German. Mrs. Gibbs would like to see France but her friend Mrs. Webb wonders why you would go so far away what with family and chores back home. These women make three meals a day from scratch.

Hecht and Baker were just wonderful as the mothers of the ill fated lovers. In the cemetery scene Baker's Mrs. Gibbs, now deceased, was heart wrenchingly poignant in advising Emily, who died in child birth, to accept her fate. In a great literary and classical tradition Emily wants to spend just one more day among the living.

Recall that Wilder wrote this play toward the end of the Great Depression on the cusp of World War II. It was a time when our national spirit and confidence was shattered. There was a self consciousness about comparisons to masters of European art. Authors were striving to write the Great American Novel. The New York School of artists was struggling to break away from the influences of Picasso and Cubism. George Gershwin composed the great American opera Porgy and Bess in 1935. Aaron Copland was composing music with an America agenda. It was set to dance by Agnes DeMille and Martha Graham.

Wilder’s Our Town evokes a time during struggle with a sanitized view of idyllic American life. It seems motivated by patriotism approaching jingoism. But theatre more reflective of social realism, like that of William Saroyan, is now dated. The more utopian and universal Our Town endures. By steering clear of being rooted in the Depression the play is open to interpretation by subsequent generations. With this production it is significant how many are seeing this classic for the first time.

Growing up in the `1940s I am old enough to recall visiting New England towns resembling Grover’s Corners.They  looked like street scenes recalling Early Sunday Morning by Edward Hopper. The mail came three times a day and there were morning as well as evening papers. Once a week I was there to grab and devour the latest issues of Life Magazine and Saturday Evening Post with covers by Berkshire based Norman Rockwell. On Sundays we went to the movies and watched the shorts and weekly news clips.

Today Our Town is not Grover’s Corners, New Hampshire, but Phoenix, Arizona.

Yes, we are allowed to attend theatre for escape. It doesn’t have to reflect reality. Martin has the right to create a poem and spin a heart warming yarn. But the morning after here I am back in America. The age of innocence has passed. Other than the folks in Polish Town there were no immigrants in Wilder’s Our Town. No Blacks, Asians, or Hispanics.

Our Town may be a great American play but it is just not My America.