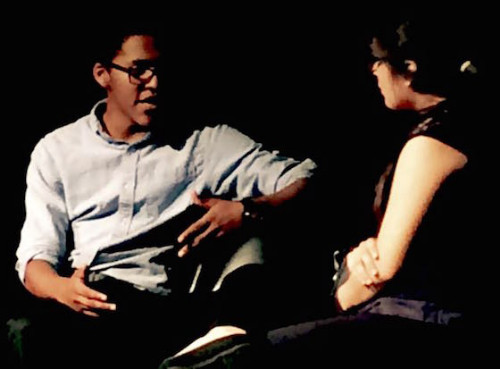 A political massacre that took place 36 years ago in another state is being dramatized with power and feeling by a cast of 11 Chicago high school students at the American Theater Company. The young actors deliver the story of the 1979 Greensboro, NC, massacre with chilling signifiers of its 21st century relevance.

Greensboro: A Requiem is the current production of the ATC Youth Ensemble, directed by Kelly O'Sullivan, from the documentary script by Emily Mann. Ensemble members visited Greensboro, the third largest city in North Carolina, to do research and interview some of the people involved. They also researched the history of the Ku Klux Klan, investigated police complicity in events, and watched videos of the actual Greensboro massacre, recorded by local news crews at the time.

The play tells the story of the demonstration by mostly black textile mill workers in Greensboro to protest the Ku Klux Klan. The march was publicized as taking place on November 3, 1979, and the marchers had obtained a police permit. When the demonstration took place, carloads of Ku Klux Klan and American Nazi Party members appeared and attacked the marchers, killing five of them. The police, however, who were on the scene earlier, took an early lunch.

Projected on the screen:

The Reverend Nelson Johnson (Casey Edwards) says, "Something happened in Greensboro, North Carolina, I think you should know about." He describes how the Communist Workers Party was trying to organize black and white textile workers, at a time when the Klan was on the rise. They decided to organize a march against the Klan. "Death to the Klan," the marchers shouted and their signs proclaimed.

Within 88 seconds, 13 of them were shot and five killed.

Are you surprised that you never heard of the Greensboro massacre? Five people were murdered and you don't remember it? That's probably because the Iran hostage crisis -- 52 American citizens held hostage in Tehran for 444 days -- began the next day.

In Greensboro: A Requiem, the people portrayed by the 11 actors are marchers, survivors, police officers, Klan members and lawyers. Edward Dawson (Michael Sandoval), a former FBI informant on the Klan, became a Greensboro police department informant. His detailed testimony makes clear that he recruited and led the Klan members to the protest site: Thirty-five Klansmen and Nazis in nine cars, including the "arsenal car."

In two criminal trials, all-white juries found the Klansmen and Nazis not guilty. Finally in 1985, a civil rights lawsuit, led by the Christic Institute and the People's Law Office of Chicago, both public interest law firms, resulted in a decision against the city, the Klan and the Nazis for violating the civil rights of the demonstrators. The survivors won a financial judgment but only one plaintiff received a payment.

The actors in the ATC Youth Ensemble are all CPS high school juniors and seniors. Director O'Sullivan has guided them to become a uniformly dynamic group of performers. Particularly strong are Casey Edwards as Nelson Johnson, Michael Sandoval as the informant Dawson, and Eddie Cotton as attorney Lewis Pitts. Madison Pulman tells a stirring story as Sally, a participant and survivor of the massacre. As politician David Duke, the former Grand Dragon of the KKK, Matt-Gomez Hidaka makes it quite clear that Duke's views are mainstream among conservatives.

The script by Emily Mann was first produced in 1996 at the McCarter Theatre in Princeton, NJ, where she has been artistic director since 1991. It was staged in Greensboro in 1999. Chicago's Steep Theatre presented the play in 2008. Mann calls her technique "theater of testimony" or crafting a play about a recent violent, politically charged event from verbatim materials such as interviews, court transcripts and other documents.

Chicago has a strong connection to the Greensboro massacre. The lawyers in the 1985 civil trial included G. Flint Taylor of the People's Law Office, known for his decades of work for Jon Burge torture victims and for the Fred Hampton Black Panther case of 1969-70. Taylor moved to Greensboro for six months in 1985 during discovery and trial to work with the local legal team.

Greensboro: A Requiem continues at the American Theater Company, 1909 W. Byron, through August 2. Performances are Thursday-Saturday at 7:30pm and Sunday at 2pm. Tickets are free but there is a suggested donation of $25. To make a reservation, call 773-409-4125 or email greensboro@atcweb.org.