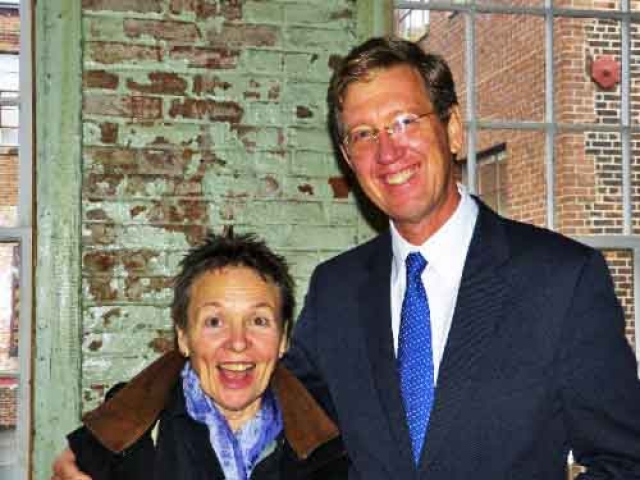 Laurie Anderson, with Joe Thompson, is excited about her project for MASS MoCA. 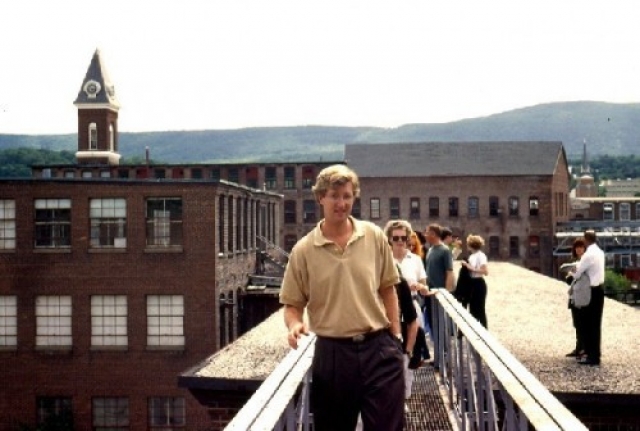 Some 20 years ago Thompson led a group of journalists on a tour of the campus prior to its launch. 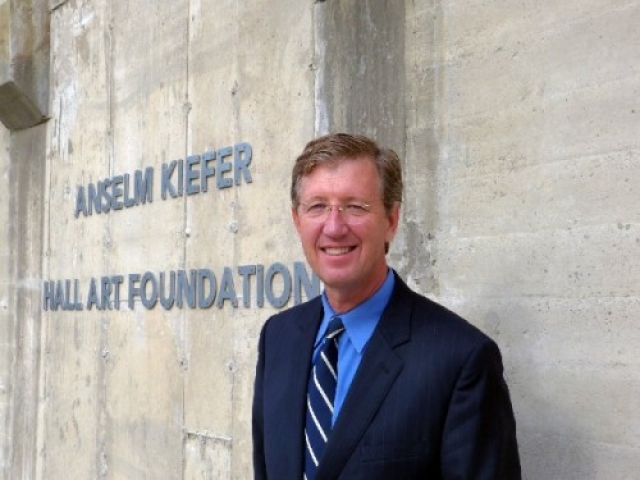 Thompson at the opening of the long term Kiefer building. 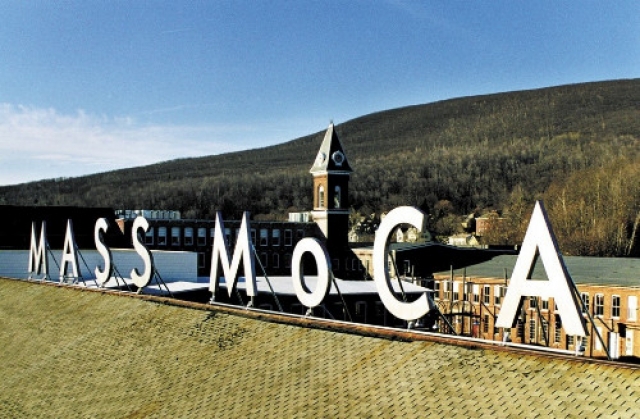 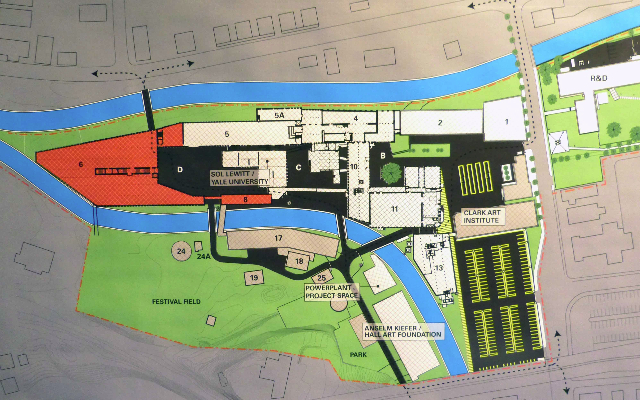 The red area of the plan is under development. 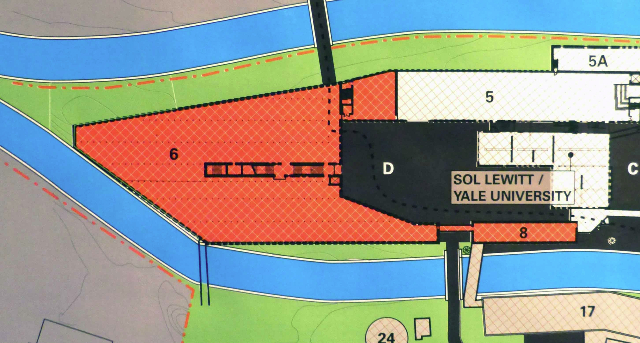 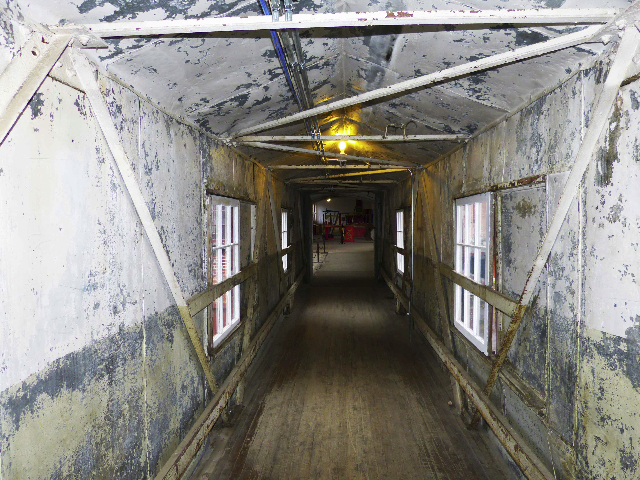 The first tour of Building Six. 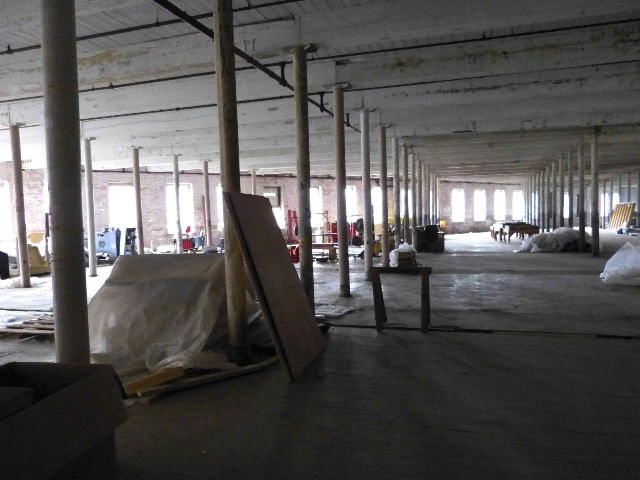 Early view of the raw space. 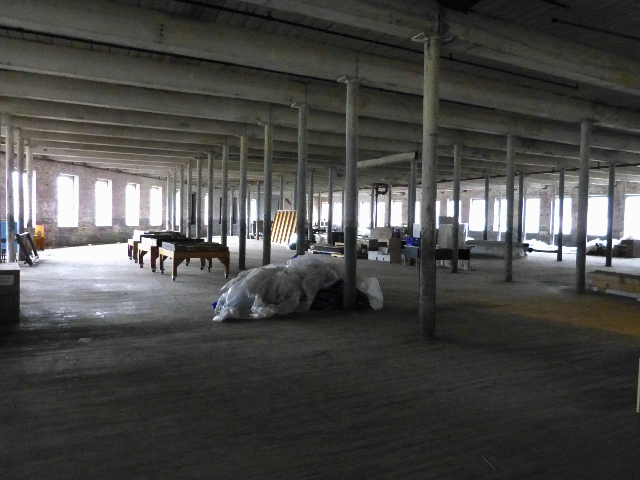 Another overview of Building Six. 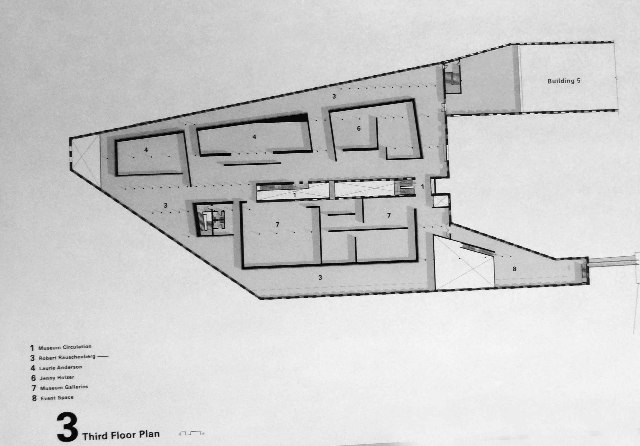 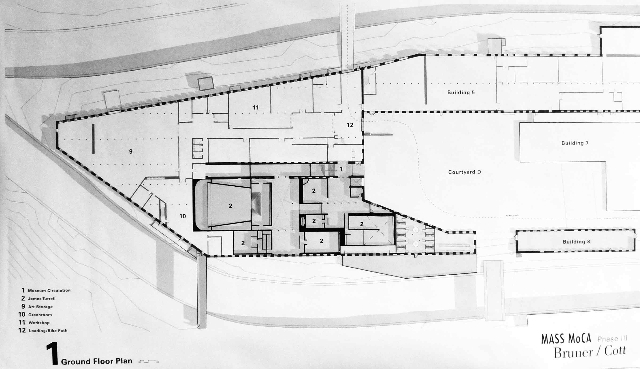 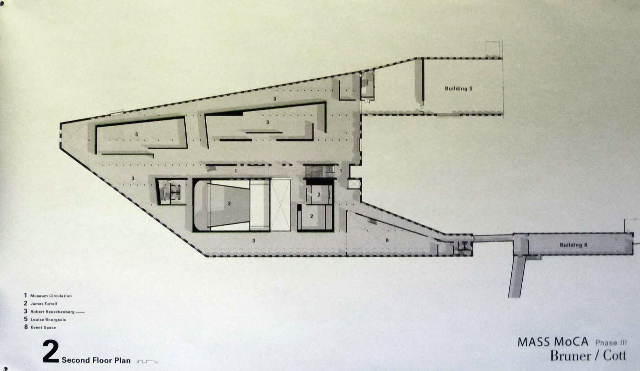 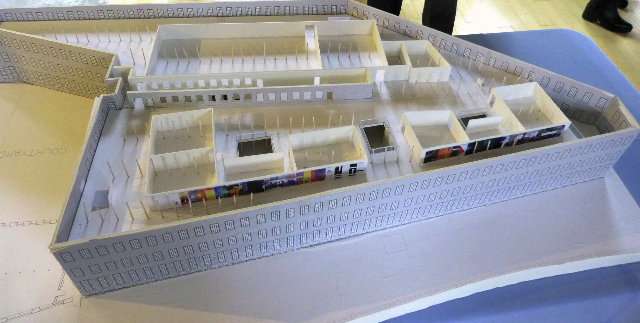 Models for design of galleries. 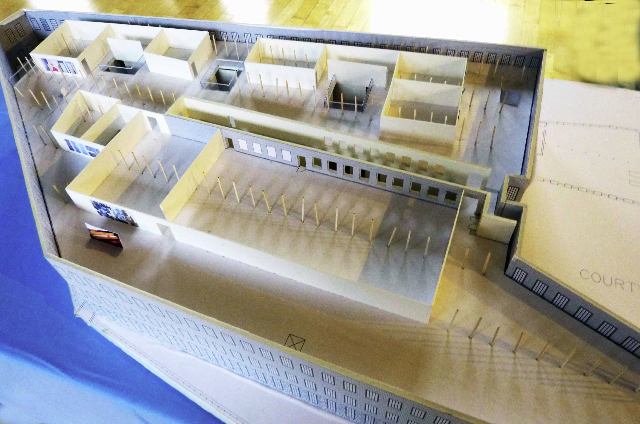 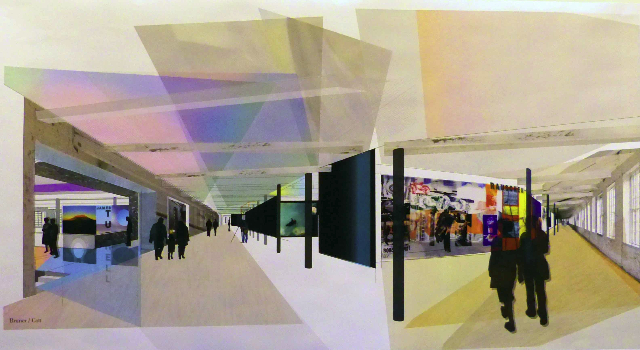 Renderings of the galleries which will open on Memorial Day weekend of 2017. 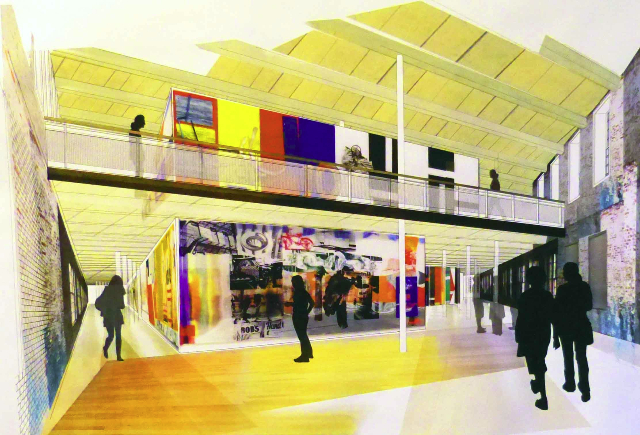 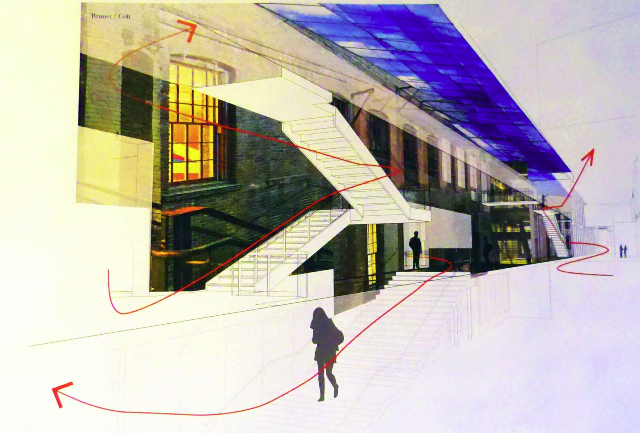 It was just about impossible yesterday to find a parking spot for a visit to MASS MoCA.

We were joining friends for a lunch at Gramercy Bistro and a mid-summer discussion of arts in the Berkshires.

Then we visited the summer show at Ferrin Contemporary. The display of ceramics by some of the top artists in the field is inspired by the Nudes from the Prado exhibition at the nearby Clark Art Institute in Williamstown.

At 3PM we joined a group for a hard-hat tour of the final phase of build-out for the vast contemporary art museum.

There were several groups conducted by guides that were staggered at fifteen minute intervals. Most people had reserved their spots while we were among a number of walk-ons.

With MoCA director Joe Thompson as our guide we made our way through the vast Building Five, the largest on campus. At its end was a door leading to Building Six which stretches out to the tip of the campus. It comes to a prow shape formed by the confluence of rivers that once powered the mills.

One had to tread lightly as there were construction materials in neat piles in the dauntingly vast space.

As we progressed, Thompson in an intimate, conversational manner pointed out areas that will entail long term, up to 25 years, installations by a combination of living artists and estates.

We started with a long, relatively narrow area that will be devoted to Robert Rauschenberg, his foundation and estate. The foundation, based in Florida, offers grants and residences to a broad spectrum of the arts. Examples of that production will be on view with rotations of the artist’s works from the estate.

Rauschenberg had a relationship with MoCA as it developed. His work was the first to be shown in Building Five. It set a high bar for the annual exhibitions since then.

In a design by Simeon Bruner and his firm, which created the initial MASS MoCA renovations, there is an emphasis on the least possible intervention with the industrial feeling of the venerable mill complex.

There are areas where subtraction is addition. In the original approach to Building Five, for example, an upper floor was removed to create a vaulted, long, rectangular space like that of a Romanesque cathedral. It has  a trussed rather than barrel vaulted ceiling.

Again floors are being removed in some areas with dramatic impact. In the interior it will accommodate an enormous installation by James Turrell.

Thompson stated that the artist has worked for several decades and there will be representative examples from all phases and styles of his career. He described a recent project of three museums spanning the United States to create a retrospective for the artist.

At MASS MoCA that overview of the artist will be compressed under one roof.

Turrell  will create a huge, pod-like space in which the walls melt away with no sense of corners. In a spiritual and meditative manner a visitor will experience being surrounded by soft and ever changing washes of colored light.

Depending upon the different requirements for individual artists there are a variety of gallery spaces.

For the performance artist and musician Laurie Anderson there will be a gallery displaying the many unique violins she has created. The area will also have a performance space/ gallery as well as a working production studio for when she is in residence. The museum will also house her archives.

Perhaps the most significant structural undertaking is preparing a space to support marble carvings by the late Louise Bourgeois. There are three works which are so heavy that they never left her studio.

The floor is being restructured with steel to support the imposing weight. When ready there will be an opening created in the outer wall. The works will be craned in and then the wall resealed.

“Over there,” he said. “Will be video projections and works by Jenny Holzer.”

In addition to galleries the renovations will also create areas to prepare exhibitions. Many works are fabricated on site.

MoCA is deeply involved with performance programming including the now established, Bang on the Can, Solid Sound and Fresh Grass festivals. On the lower level will be facilities for musicians including rehearsal space, green rooms, rest-rooms and catering kitchens.

Some of the upper level space is modular and may be adapted for performances, rentals for weddings, corporate events and receptions.

The shape of the building, formed by the natural topography,  is odd but the designers and museum have made wonderful use of the challenges it presents.

Coming to what Thompson described as its prow we were on the upper level looking at an enormous open space. Part of the floor will be removed and this will have a two story vista. One looks out at converging rivers and rural landscape in the direction of Williamstown.

This will become a resting and lounge area. Visitors can sit and enjoy coffee and snacks.

We ended up before a display of plans and elevations as well as pie charts to help understand the dynamics of construction and funding.

Looking at a ground plan of the campus Thompson demonstrated how visitors can now navigate the complex of buildings without the need for doubling back.

We were on our feet for two hours and visited about half of the campus. This did not include the Kiefer and LeWitt buildings.

It is possible that one could walk a couple of miles if you see all of the galleries in a single day.

With some $15 million for endowment, when completed, the project will come to about $65 million. It was made possible with a matching grant of some $25 million which was a nail-biter for the museum when it was pending at the State House. According to Thompson, there is about $10 million left to raise.

Pointing to a chart breaking down costs he summarized that the construction will come in at  $300 plus per square foot. He compared MoCA to other recent museum projects which cost up to $8,000 per square foot.

In the case of MoCA the low cost is made possible by renovation of structurally sound, existing buildings. The approach of minimal intervention and exposure of HVAC elements represents a great saving.

In an aerial view of the complex we noted the installation of solar panels. Some the museum owns outright and others are contracted with companies that have changed hands.

“We keep sending checks to different companies” he commented. Overall the solar panels, year round, will cover about 25% of the energy needs of MoCA.

With this final phase of development, which will be unveiled on Memorial Day weekend of 2017, the museum has come a long way from its original conception.

While enormous the museum is far from rich. There has been an effort to create an endowment. Lacking resources to purchase a permanent collection it is reliant on the generosity of artists to display their work and for collectors and estates to allow for long term loans.

When complete MoCA will hover between identities as a museum displaying contemporary masters, as well as, a cutting edge kunsthalle.

Making our way back through Building Five and the tangential galleries on three floors I felt my age and a generational shift as an art historian and critic.

Frankly, very little of the new work engaged me. It felt so much younger and at odds with my core sensibility. It reminded me of how out of touch I have become. That has been an ongoing process over the past decades.

On the other hand the classic post modernism of the museum aspect of  MoCA feels familiar, comfortable and inspiring.

Departing the museum and an insightful afternoon of viewing work in progress I reflected upon what this all means.

Work by LeWitt, Kiefer, Bourgeois, Rauschengerg, Holzer, Turrell, Anderson and others was initially, arguably, just as daunting as the work by emerging artists that MoCA is mandated to present.