The Demon at Bard's Summerscape 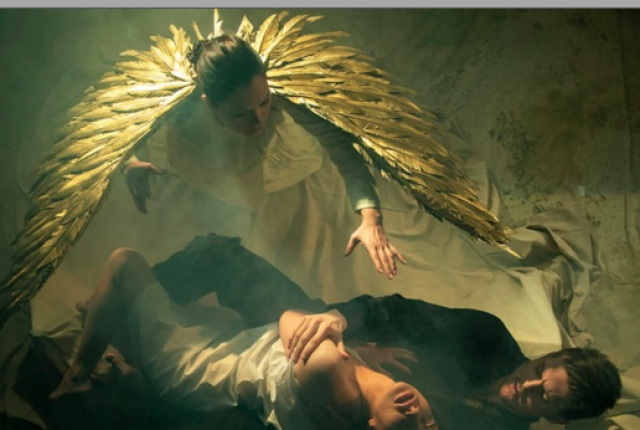 The Demon at Bard Summerscape

Leon Botstein is presenting Anton Rubenstein’s The Demon at Bard’s Summerscape. Annually, he offers meritorious works, long buried or ignored by opera companies. He makes the case now for Rubenstein.

The Demon was a mega-success when it was first performed in the late 19th century. Audiences loved it and, in Botstein’s hands, it is easy to see why. The music is gorgeous, folk references abound and the central dances are terrific. Kicks, squats, heels to ground and flying leaps whirl by with such precision and speed that your eye works hard to keep up. The rhythms of the movements and the music thoroughly engage. The aristocrats at a doomed wedding are riveted on the magnetic dancing before the dread news arrives. The groom is dead.

No one says “Get thee to a nunnery,” but the bride, Tamara, goes off to a convent. She cannot imagine life without Sinodal, although since The Demon has spotted her as he circles the Georgian landscape, an airborne Eugene Onegin, she has felt the thrill of his passion for her. The tug toward him begins early.

The cast all speak Russian as their first language. The music composed for the language’s sounds and accents is rewarded by these singers. The principals are all magnificent. Trigger warning: Alexander Nesterenko as Sinobal gets killed early on, but not before we have a chance to relish his tenor, gloriously large with a tinge of metal on the edge.

Princess Tamara and The Demon hover between this world and the next, or perhaps an earlier one. Singing The Demon, Efim Zavalny soars over the Georgian landscape, spotting Kazbek’s diamond faces glittered with snows that never melt and massifs of stone that bow their peaks as he flies by. We get a tour of the country and the pleasure of Zavalny’s travelogue.

The Demon yearns for love which is denied him because he is dead. If he can love a woman, he will be restored to humanity. He falls to the earth to pursue Princess Tamara.

The gifted director Thaddeus Strassberger, a Summerscape regular, presents the opera without cuts or re-shaping, but he takes advantage of sets and interstitial music to bracket the piece from Tamara’s point of view. Now the opera is a look back over her experience. She is musing about what has happened in the nunnery. Her father, the commanding bass Andrey Valenti, is gathering suitors from distant places. She wins the argument that she will be no one’s bride and retreats to a dim cell in a convent.

Yet she is afflicted by illicit dreams which The Demon delivers from his vantage point on high. Prior to his arrival, “No breeze of ill has dared to roister, ..the well-beloved cloister.”

The dialogue between Tamara and The Demon is a direct lift from the Mikhail Lermontov’s poem. Rubenstein had dismissed his librettist and finished the work himself. Tamara extracts a promise that his figure, to whom she is fatally attracted, will give up his evil machinations. The Demon promises.

Settings by Paul Tate dePoo III evoke the beauty of Georgia and the castle of Gudal’s family. Rippling silks suggest water. A Russian-themed design dips from the castle’s ceiling. The nunnery in a stone grey is appropriately dark. JAX Messenger lights to capture mood and place. The video projections of Greg Emetaz enrich the setting immeasurably.

The American Symphony Orchestra under Botstein displayed some lovely music. Rubenstein is not the most elaborate of composers, but his music underpins the emotions rolling out on stage. The dancers and dance music give heightened pleasure.

The music, and particularly the choruses sung here by the Bard Festival Chorale, suggests that trial runs as concert offerings by orchestras may be a good way to test the work outside Russia.

Dimitri Horotovsky championed The Demon and this production is dedicated to his memory. Kristine Opolais as Tamara is also available.