Something Old and Something New 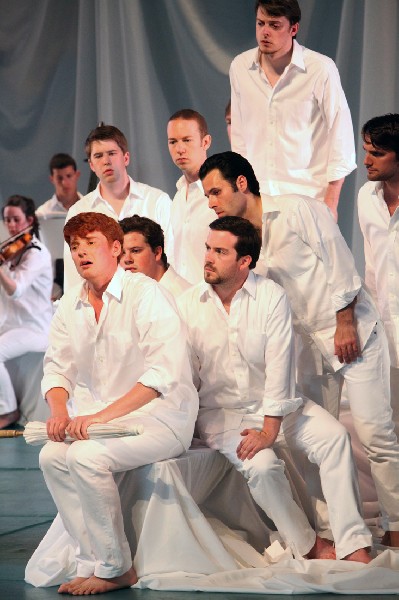 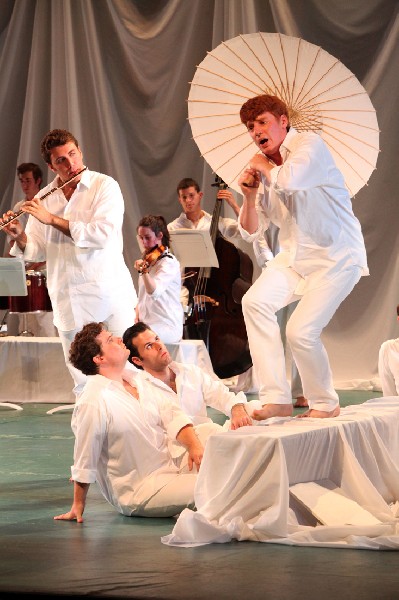 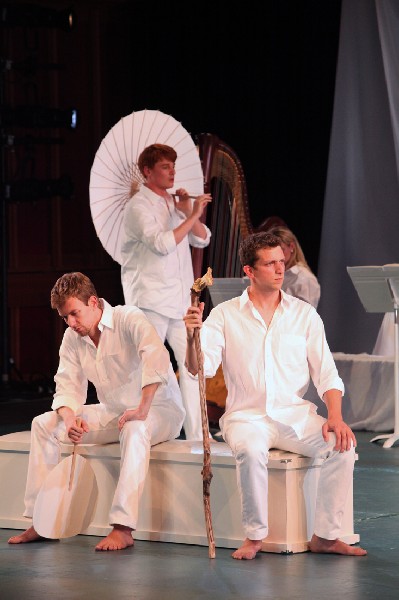 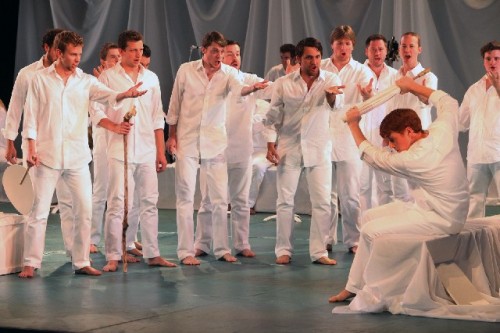 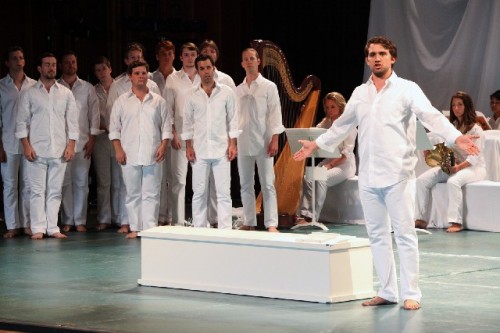 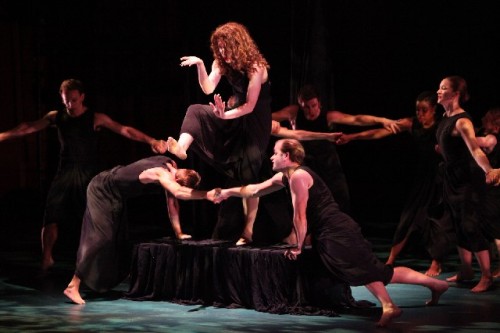 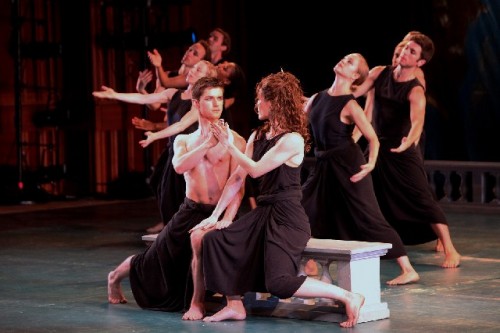 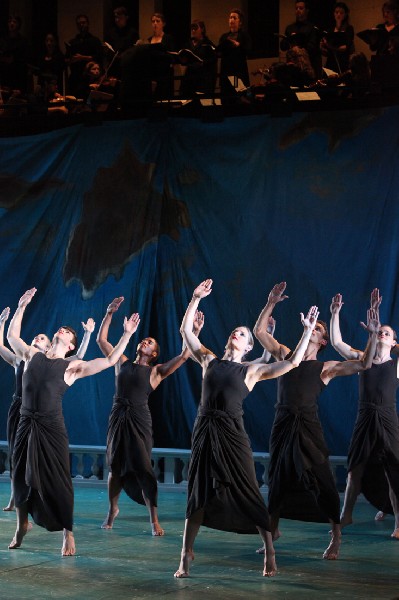 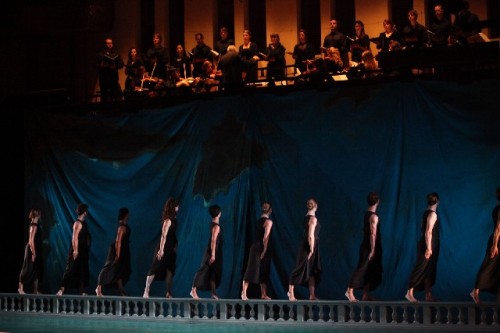 For his annual visit to Tanglewood Mark Morris aspired to deliver something special.

On the occasion of the 100th birthday of the British composer Edward Benjamin Britten  (November 22, 1913 – December 4, 1976) last night Morris presented the world premiere of Curlew River. The chamber opera was inspired by a then young composer visiting Japan. It is adapted from Juro Motomasa’s medieval play Sumidagawa.

For the second half of the program The Mark Morris Dance Group presented one of his most iconic works Dido and Aeneas (1989). Initially, Morris danced the dual roles of Dido and the Sorceress who conspired her demise and the destruction of Carthage. Henry Purcell, the other British composer on this symmetrically programmed evening, was just 30 in 1689 when he composed one of the first operas.

When Morris stopped performing in 2000 the piece was retired. It was long considered that nobody could replicate Morris’s unique performance. In a restaging, over the past few years, that has proved not to be true. For audiences it is a great privilege again to be presented with such a seminal work for the company.

In now familiar aspects the dance established many of the signature tropes and quirky movements of the Morris style which often conflates dance and Baroque composers. Arguably Dido and Aeneas serves as a primer for those seeking a template for his approach to choreography and expression. At the time he commented on dancing Dido as a means of bringing to his performance the emotional dimensions that were, until then, regarded as the exclusive domain of women.

Morris was among the first to blur gender in dance with men performing as the Sugarplum Fairies in his hilarious Hard Nut. Or men partnering and lifting each other in a sexual reconfiguration of the pas de deux.

The starkly stylized rendering of Curlew River was daunting and incremental. While sung in English many in the audience followed the text in their programs. It is difficult to concentrate on two things at once. We opted to focus on the performance and read the text, filling in the gaps in what we had perceived, before posting this account.

Arguably, this was a definitive performance of the Britten work but, for me, the going was often tedious and enervating.

Of the first of three “parables for church performance” that Britten wrote in the 1960s, a British critic noted that “The fierce simplicity of the tale gets obscured by flummery and faux religiosity.” In an interview even Morris commented that “It’s so dated, it’s so corny, it’s so bad.” Then went on to discuss how he planned to refresh and update the piece.

Reset in the Christian medieval period the work retains some of the Japanisme that Britten affected. This entailed both musical reference to Noh as well as props such as a rice paper parasol which would be unique to Europe prior to Marco Polo. Also, during one element of the work, the chorus is intent on creating origami birds which are used at the end for a ritual strewn on the grave of the abducted dead youth at the heart of the narrative.

So there is a lot of mix and match of metaphors, style, dance and music collaged through the unvarnished genius of Morris. For all of which the perhaps flummoxed audience responded with polite but less than tumultuous applause.

Perhaps, like me, they had come to Tanglewood expecting an evening of dance from the most renowned choreographer of his generation.

Not to say that Morris shouldn’t grow and explore new challenges. He seems ever more interested in music and has added conducting to his quiver now that he no longer performs. Is composing next on the agenda?

Arguably, from Tanglewood’s point of view, he has brought something fresh and exciting to Britten. In that sense this was an exciting new experience.

Against a white backdrop the dancers and musicians in white pants and untucked shirts entered singing Gregorian chant. That established a Christianized context for the ersatz Japanese. Rather like Kurosawa reconfiguring Shakespeare.  We are by now familiar with cultural reversals. The norm is to consider that it makes one culture more accessible to the other.

Eventually, the musicians moved to the back of the stage but remained visible as an element of the aesthetic. Now and then a musician would step up as a character interacting with the narrative.

While not dancers the performers- musicians and singers- are much to be applauded for adapting Morris’s simple but challenging movement. Here movement is a better word than dance as the performers revealed no evidence of familiarity with  mirror and barre. By contrast, as singers, they were uniformly magnificent. It was a challenging opportunity to which the ensemble rose brilliantly.

This, indeed, is now the Only way to experience Curlew River.

“I sing of arms and the man, he who, exiled by fate, first came from the coast of Troy to Italy, and to Lavinian shores – hurled about endlessly by land and sea, by the will of the gods, by cruel Juno’s remorseless anger, long suffering also in war, until he founded a city and brought his gods to Latium: from that the Latin people came, the lords of Alba Longa, the walls of noble Rome. Muse, tell me the cause: how was she offended in her divinity, how was she grieved, the Queen of Heaven, to drive a man, noted for virtue, to endure such dangers, to face so many trials? Can there be such anger in the minds of the gods?”

These are the first lines of The Aeneid the epic poem by Virgil about the founding of Rome by Aeneas who with a band of men survived the fall of Troy.

Landing on the coast of Carthage, later to be the foe of Rome during the Punic Wars in a struggle to dominate the Mediterranean, the weary Aeneas and his men are welcomed with celebration and feasting by Queen Dido.

They become lovers in a brief dalliance. We note this when momentarily Aeneas lies down on top of Dido. She invites him to rule with her. But the gods have destined him to a greater task as founder of the Roman Empire.

The Purcell opera and Morris’s dance compress that ill fated tragedy into an hour. Here the musicians were located on a balcony overlooking the stage of Ozawa Hall.

Unfortunately, the program does not identify the roles of the dancers. But much credit is due to the tall, gangly, mannish looking dancer who performed Dido with chilling magnificence. I never saw Morris in the role but surely this was a match. We did see him perform several times and it is an indelible memory. Nobody dances Morris like Morris.

But last night, in this richly satisfying performance, the experience was refreshed and  intoxicating.

Again it was difficult to comprehend the lyrics although they were sung in English. In this case the legend and narrative were so familiar that one could focus entirely on the movement. Often Dido flung herself about the stage as though possessed.

In a casting mismatch she towered over the bare chested Aeneas who seemed to have trouble keeping up with her explosive energy and charisma.

No wonder that he took off in the middle of the night, with suitable protestations, as was the will of the gods.

Distraught she took her life and thereby established the vengeance cycle with Rome.

In a passage of the Aeneid, not in this piece, the hero traveled to hell to learn the fate of his parents lost during the confusion of the fall of Troy. Aeneas passes Dido as a grieving shade. Virgil allows for a moment of remorse.

Later, perhaps as punishment for this slight of Dido, the poet Dante conjured him as a reluctant guide through the Inferno.

So goes the sad tale of the founding of empires and their fall.