Steppenwolf Transports Guilt to the Jungle 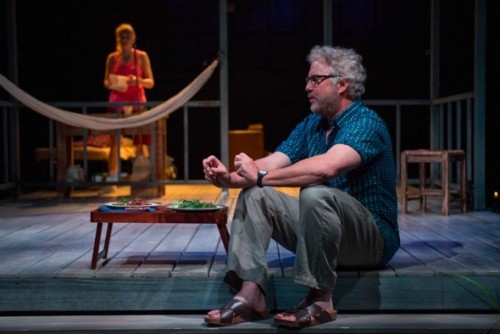 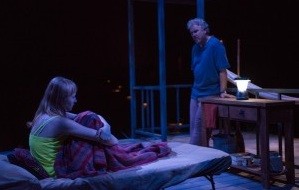 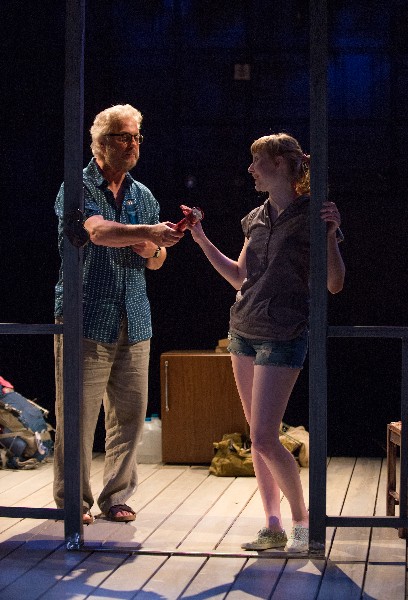 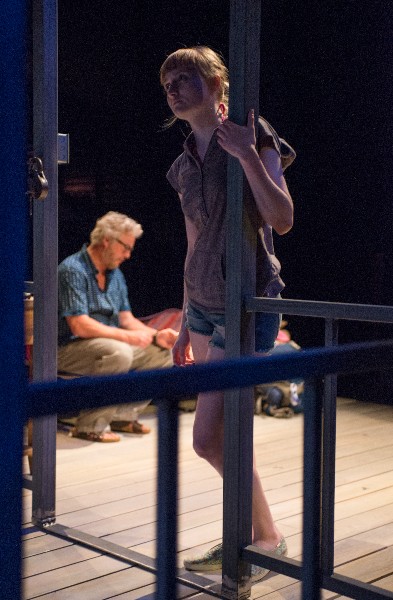 A prison or a place of revelation? 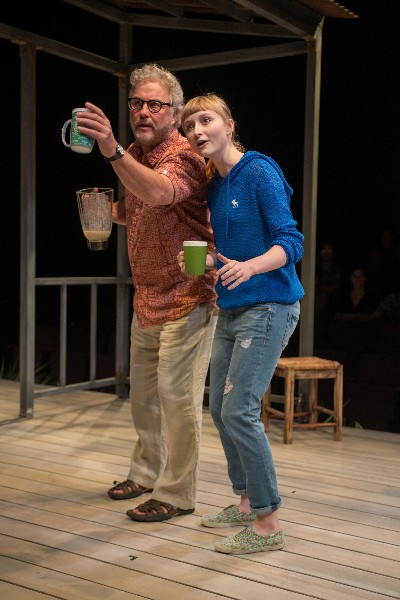 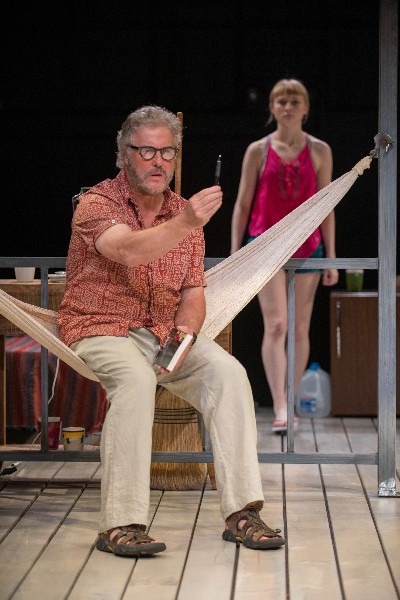 Entering the upstairs theater at Steppenwolf, you are immediately sucked into another world.  On a platform stage in the center of the theatre, a windowless, doorless frame divides a porch from the cabin’s interior, a makeshift bedroom/kitchen area, the bedroom set off by an imaginary door.  High up, branches of the rain forest hover over the home.  Takeshi Kata creates a brilliant setting.

Colors are muted browns.   An intense red will come to dominate the feeling of the play.  Playwright Greg Pierce conjures it up.  We never see red.  A dangerous snake is attracted to the color.  And red blood  signifies the cause of Becky’s guilt and perhaps guilt itself, like a bold red letter G emblazoned on a shirt.

Sounds of the jungle evoked by drums and flute like instruments waft through the theater and transport us to a strange, isolated place.  The nails of an iguana clawing the cabin’s roof disturb Becky’s sleep.  The soundscape designed by Richard Woodbury perfectly evokes the rain forest.

The setting dominates the improbable meeting of two guilt-ridden family members in the “dry” rain forest of Costa Rica, where water caught from the sky is bottled for consumption.  Randall Arney choreographs a dance between the two characters which invites the audience in:  Sitting facing each other in two banks, with the stage seamlessly positioned between, we are part of the jungle, animal and plant.

Frozen packages of mango are at the ready for smoothies.  Becky would like to add rum.  She is just 17 and underage and uncle Sterling, in loco parentis,resists.  Becky of course gets into it.  She has served up jello shots to a dim-witted girl whose accident Becky is being held accountable for. If the girl dies, Becky imagines, she will be put on trial and find herself on death row.

Slowgirl is the nick-name of the injured girl, but also suggests that the precocious Becky needs to be slowed-down.  No detail of life (or death) escapes Becky’s attention.  She is sure that there are a specific number of steps from every inmate’s cell to the electric chair.

Conjuring images at the extreme is one of the playwright’s gifts. Characters in this two-hander make us both see and feel them.

Rae Gray captures the raucous, impulsive language of teenage Becky.  Phrases pasted together could stand alone as a sharp rap.  Metallic, darting words will eventually punctuate her uncle’s controlled cool and his adult posturing.  Becky is a wannabe poet, and, as her uncle points out, is gifted.  Even the idea of a poem made from the first twenty words that cross her mind, is the very essence of poetry.

How refined the guilt sensibilities are.   Sterling did not stuff other people’s money in a fake account and then take his indispensable wife traveling to visit the Queen of England.  He was acquitted at trial.

And yet, and yet.  His sense of culpability continues, probably because he knew all along that the fake account existed.  He had been able to avert his gaze.  His wife was on the ride for the trips.  When the bonus money was cut off,  she left.  And Sterling quit the country for the anonymity of the jungle in a strange and distant place.  William Petersen masterfully bridges the lost quality of the character and his strength.

Gray’s portrayal of the touching niece-from-hell is startling. As she interrupts her uncle’s placid but detached life, nothing goes unnoticed.   The karmic maze where Sterling seeks redemption and the blow jobs from his neighbor’s wife (not coveted) both catch her attention.

Although Sterling was acquitted at trial, his guilt is an albatross.  Becky’s guilt colors all her future forecasts.

What will happen is not clear, but the bond between two family members who care enough about others to be burdened by these feelings becomes tighter and more satisfying as the evening progresses.

It’s striking as we read of JP Morgan Chase’s recent fines for price fixing of the California energy market, that none of the people responsible, first and foremost Chase chairman Diman, seem to feel any guilt whatsoever.  When we are involved with acts that are illegal, or turn sour, guilt may be the appropriate reaction, even if we are hovering on the sidelines.  How to live with the lodestone is the subject of this powerful play, where we watch, an intimate part of the proceedings.