The Sound Delivers the Message 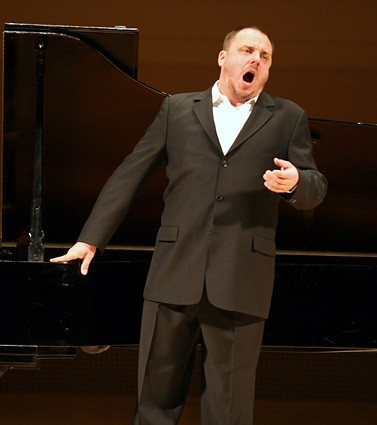 Goerne Makes Music with his Hands 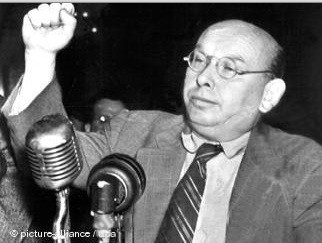 Hanns Eisler, composer and anti-Fascist. His American experience included many Hollywood films and an appearance before the House Un-American Activities Committee to explain a brush with the Communist Party in Berlin in 1926. 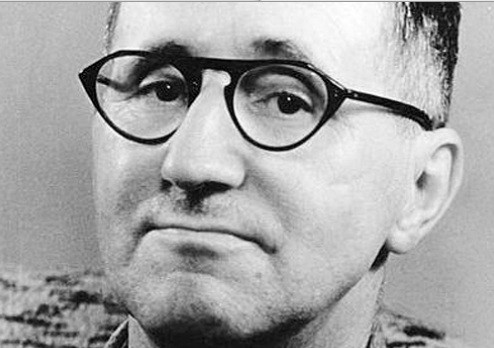 Brecht, whose words Eisler often set to music, said of Eisler: His whole attitude is revolutionary..It brings forth new tenderness and strength, endurance and versatility, impatience and foresight, challenge and self-sacrifice. 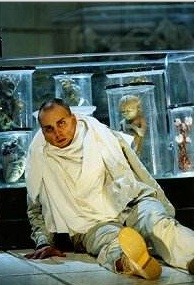 Goerne is very much an artist for our times. He suggested that a water tank be used to show Wozzeck drowning at the opera’s end. The director had not dared asked any singer to do this, but it had been his own original wish.

Matthias Goerne was performing at Carnegie Hall in New York and invited to come across the street and up a few blocks to watch a rehearsal of Wozzeck with Thomas Hampson singing the title role and James Levine conducting.

Hampson fell ill before opening four days later.  On a moment's notice, Goerne stepped in.  His was a great rendering of the role.

Goerne says that he has learned much from singing opera, particularly how to project your voice over a large orchestra, but he prefers singing songs: "Singing lieder is more interesting than other types of singing because, together with the pianist, you have full influence over how the music is rendered. It's harder than singing arias, because you have to use your voice in so many different ways. In a recital, you have to think more; you're not just following automatically wherever the music is going. There is a huge intellectual part to singing lieder, less so in opera. The emotions you have in one song you sometimes have only after four hours of opera. And you have to sing in between the rhythms and play with dynamics more in lieder."

Words fail to describe the impact of Goerne's voice singing the songs of Eisler and Wolf.  He has a comfortably wide range, delivering effortless high notes and low alike.  Subtle dynamic shifts occur within phrases, but also in the intimate gutturals of a word. The sound delivers the message of the words, as it should in music.  You do not need either text or translation to get exactly what the composer is portraying.  Color and a juicy richness often contrast with pure tones that stun.

Goerne was accompanied by Alexander Schmalcz, who attended the score like a hawk, and both supports and leads Goerne at just the right moments.  Partners and accompanists are reported to treasure performing with this baritone.

Weeks ago, Goerne performed Schubert's Winterreise at the Aix-en-Provnce Festival.  It is now available to subscribers on medicitv.  Not only does Goerne attract as collaborators all the great music artists of our time, but he joins William Kentridge in this novel production of the Schubert cycle.  Kentridge, known to Americans for his sets for Shostakovich's The Nose at the Metropolitan Opera and his delightiful setting of The Magic Flute, knows exactly how to keep the music most important when he provides multi-dimensional art.

The background images moving behind Goerne in Winterreise enhance the color and words of the songs without in any way interfering with the performance of the singer.  This production is at Alice Tully Hall in New York on November 11 this year.

Hanns Eisler was already a noted ant-Fascist when Hitler's National Socialist Party took control.  Fortunately he was in Vienna preparing the music for a Bertold Brecht play production.  As an encore at Ravinia, Goerne sang Brecht's Round Heads and Pointed Heads, on "the stimulating effects of cash."  Eisler remained in exile from Germany for fifteen years.

One member of the audience, who had visited the Holocaust Museum in Washington three times, had heard enough of the message of these songs, although she was enraptured by Goerne's voice.  When I revisit this time in history, I feel its story cannot be repeated often enough.  The message delivered by a German national is even more powerful.  George wraps every feeling imaginable around the words and is incomparably moving.  Actually, many of the songs forecast Piketty's charge today.

Goerne uses his whole body almost like a dancer.  Singers feel they have to restrain hand movements when they sing.  Their preferred positions can be seen in videos of recording sessions where, without inhibition, they pull tones out of their bodies.

Goerne conducts himself.  His hand movements, swaying to and fro. less direct his voice than underpin it.  If his hands dance, so does the voice as it etches itself inside the listener.  Sometimes he creeps up and surprises.  At others, he takes a rolllicking pace and makes you smile.   You can't leave him for a moment because he enthralls.  Meticulous and free-flowing at the same time, Goerne is a baritone for the ages.  We can't wait to hear him do Bluebeard's Castle under Japp Van Sweden in Dallas in November.  The prospect of his performance, sure to be as malevolent as it is seductive, is a guilty pleasure to contemplate.