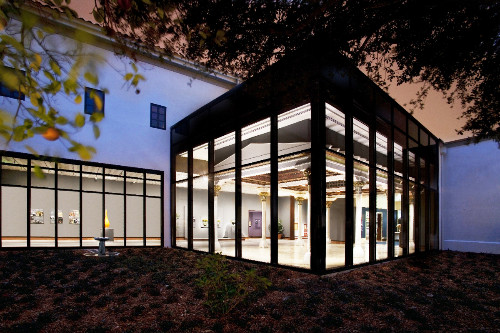 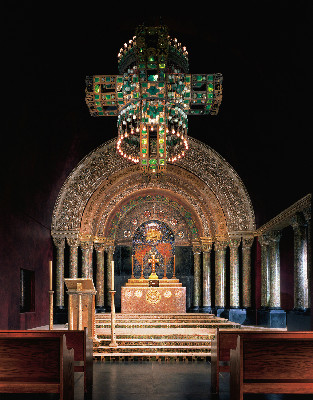 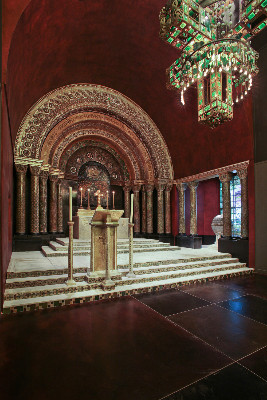 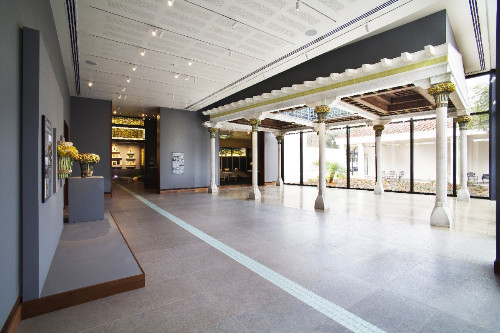 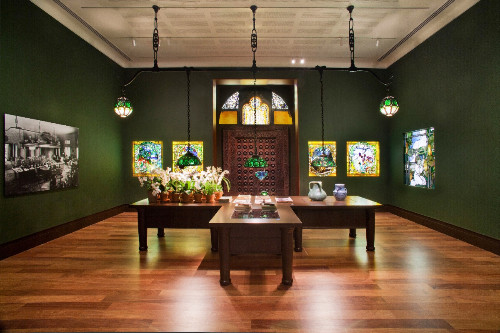 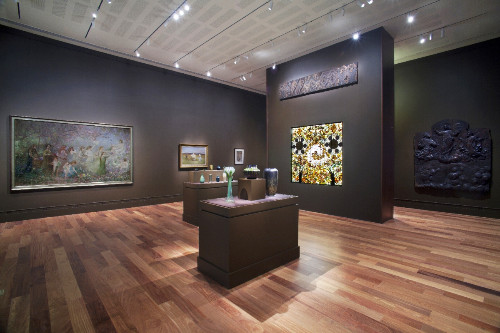 THROUGH A GLASS BRIGHTLY: LOUIS COMFORT TIFFANY AT THE CHARLES HOSMER MORSE MUSEUM OF AMERICAN ART IN WINTER PARK, FLORIDA.

Jewel-like leaded glass lamps and radiant stained glass windows. Famed American artist and designer Louis Comfort Tiffany (1848–1933) is identified in the public mind primarily with these creations. But at the Charles Hosmer Morse Museum of American Art in Winter Park, Florida, the full range of Tiffany’s innovative and versatile aesthetic vision can be appreciated.

The 42,000-square-foot Morse Museum houses the world’s most comprehensive collection of works by Tiffany, including not only his leaded-glass lamps and windows, but jewelry, pottery, paintings, art glass and, on a grander scale, both his chapel interior from the 1893 World’s Columbian Exposition in Chicago and art and architectural objects from his Long Island country estate, Laurelton Hall.

The Museum was founded by Jeannette Genius McKean (1909–89) in 1942 and named for her grandfather, Chicago industrialist and Winter Park philanthropist Charles Hosmer Morse. Its collections were built over a half-century by Mrs. McKean and her husband, Hugh F. McKean (1908–95), the Museum’s director until his death.

From May 1 to Oct. 31, 1893, 27 million visitors came to the World’s Columbian Exposition in Chicago - nearly one-quarter of the country's population at the time. To demonstrate its artistry and craftsmanship in producing ecclesiastical goods, the Tiffany Glass and Decorating Company installed a chapel interior in the Exposition’s Manufactures and Liberal Arts Building, as a holistic display of the firm’s mosaics and leaded-glass windows.

The chapel’s interior included six ornately carved plaster arches, 16 mosaic columns, and a 1,000-pound, 10-by-8-foot electrified chandelier in the shape of a cross. After the Exposition closed, the chapel was taken apart and over the ensuing decades was moved from place to place, eventually being installed in a free-standing building at Louis Comfort Tiffany’s Long Island country estate, Laurelton Hall. After his death, the chapel was sold off piece by piece.

The McKeans tracked down and bought all the pieces of the chapel and had it reassembled within the Museum. Catherine Hinman, the Museum’s Director of Public Affairs and Publications, said “A highlight of a visit [to the Morse Museum] is always the Byzantine-Romanesque chapel interior Tiffany designed for exhibition at the 1893 world’s fair in Chicago, which literally brought fair-goers to their knees in 1893 and continues to mesmerize our visitors today.”

Tiffany’s 84-room Long Island home, Laurelton Hall, was built between 1902 and 1905. The furnishings and architectural details were all executed at his direction. After the Hall was destroyed by fire in 1957, the McKeans rescued what could be salvaged. In 2011, the Museum opened a 12,000-square-foot wing, the centerpiece of which is the Laurelton Hall’s 18-by-32 Daffodil Terrace, supported by eight 11-foot marble columns topped with bouquets of glass daffodils and featuring a skylight covered by six large panels of iridescent-glass tiles in a pear-tree motif, is installed in a glass-enclosed gallery. Pieced together from more than 600 distinct fragments, the terrace is the Museum’s most significant conservation project since reassembling Tiffany’s chapel.

Steve Langston, Director of Design for RLF architects, designers of the museum addition, said, "In regards to the most recent addition, the challenge was to recreate the feeling of the original house using the saved and restored pieces in a museum setting without replicating the original house.

For RLF, the biggest problem of displaying Tiffany glass is obviously getting the correct type and position of light so that the pieces can be seen properly and understood in regards to how they were used. Some were individual pieces within a house and others were integrated into the architecture of a structure, so some were conceived of by the artist to use artificial light where others were to be seen filtering natural light into various living spaces. [Morse] museum director Larry Ruggiero and RLF lighting consultant George Sexton made this monumental task seem easy.”

The Charles Hosmer Morse Museum of American Art is located at 445 N. Park Ave., Winter Park, FL  32789. More information, along with a PDF copy of the Museum Visitor’s Guide, is available at www.morsemuseum.org.