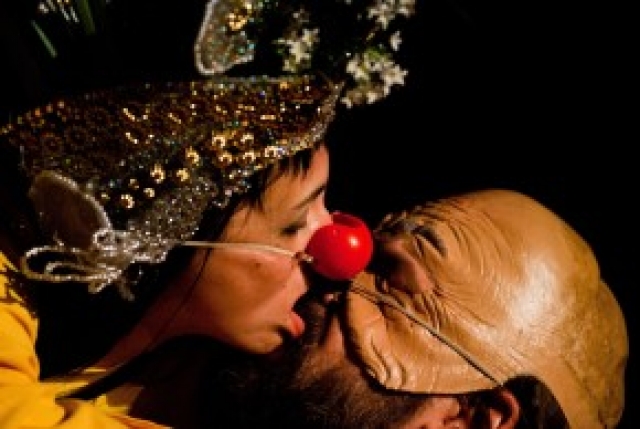 Foreign Affairs, the international performing arts festival at the Berliner Festspiele is history, literally. This year's festival was the last one of its five-year run. It took place from July 5-17, 2016. The last three years were under the artistic leadership of Matthias von Hartz and brought ever-expanding public involvement and an increasingly frenetic search for innovative alternatives to theater practices at large.

The finale under the so aptly chosen theme of 'uncertainty' consisted of a mind-boggling crescendo of participatory involvements of the following: The New York based performance group Nature Theater of Oklahoma, an overwhelming array of performances, exhibitions and lectures by South Africa's superstar William Kentridge, social commentaries by the Belgian Jan Louwers with his Needcompany's The Blind Poet, and an over the top musical performance piece en avant, marche! (forward, march) by brilliant Alain Platel. It was topped – at least in duration - by an all night performance of the British group Forced Entertainment under the leadership of Tim Etchells.  A world premiere with the title From the Dark represented the final highlight of the festival.

And, this year's festival could also be described in such emotional terms as enough was never enough. Or, as Thomas Oberender, the head of the Berliner Festspiele put it, "that the focus of this institution was and always will be to explore the extraordinary, to do and to offer too much. " And too much it was. Every nook and cranny of the building, its cellar, its garden, the big windows facing the outside, all the open spaces, as well as the biggest exhibition space at the fabulous Martin-Gropius-Bau (museum to present big international exhibitions and part of the Berliner Festspiele) were used to showcase international groups and help invite the public to participate in several performances.

Opening day was tune up day for the audiences. They were handed pajamas to partake, if they wanted, in the filming of Nature Theater of Oklahoma's filming of Germany Year 2071: The Road. The filming took place on the road leading to the theater, where participants had to escape from a giant monster. Other off-site filming and participatory events continued during the festival. One turned into an unplanned encounter with the Berlin police when, at the exclusive Mac electronic store on elegant Kurfürstendamm. Some performers distributed coins that melted at touch. In these uncertain times, where terrorist acts are a daily possibility, the startled public did not take chances and called for help.

This little discord was easily quelled. The festival continued on its indulgent path. Especially the late hour concerts were usually multicultural, frequented by a younger audience, and they were understood as invitations towards a party. Always reflecting cultural attitudes, some turned into vehicles for discussions. One performance especially, lead by the South African band The Brother Moves On, reacted to Kentridge's film Ubu Tells the Truth and marked the work of the Truth and Reconciliation Commission as a failure in regard to bringing a better life to South Africa's black population. It started out in the lower foyer with performances and music for a somewhat confused audience that was eventually led in a carnival procession upstairs to view a raucous banquet. The public scattered around, was invited to join for food, drinks and dance and was treated to commentaries of South Africa's political machinery by the host of the dinner.

This enjoyable performance was also an answer to the Kentridge performance Ubu Tells the Truth. The big focus of this last Foreign Affairs seemed to have been an only slightly veiled Kentridge retrospective. The white South African from Johannesburg with Lithuanian Jewish roots is a giant on the international cultural scene. He is acclaimed for his opera productions and multi-media performances. The festival allowed for tracing techniques of performance pieces, where he is tapping into vast abilities as to drawing skills and animated film making and his knowledge and interest in philosophy and literature.

Kentridge's vast exhibition No It Is can be seen at the Martin-Gropius-Bau through August 21, 2016. During the span of the festival Joanna Dudley gave an added performance leading through the show with her own interpretation. No It Is  constitutes an overview of his oeuvre and functions as a great introduction to his multi-media works at the festival building. Ingenious, how Foreign Affairs linked the museum show with the eight performances and exhibitions shown at the Berliner Festspiele and thus presented and illuminated Kentridge's entire interdisciplinary work of the last three decades. Although a seeming overkill to see so much of his work, it turned into an extraordinary opportunity to become familiarized with the art of such an exceptional thinker and creator.

Among others, there was Schubert's Winterreise sung by the baritone Matthias Goerne with visual commentaries by Kentridge projected on a screen behind the singer, there was Ubu and the Truth Commission as a collaboration with the famous Cape Town Handspring Puppet Company. He recreated his fabulous Drawing Lessons I-V, originally presented in 2012 as a lecture series at Harvard University. These are delightful and inspiring investigations into Western World values and misinterpretations on personal and political levels. The video installation More Sweetly Play the Dance from 2012 was projected on the facade windows of the festival building for everybody to see daily after 10pm. It dealt with his South Africa as a land of many traditions, which is still torn between the remnants of Apartheid behavior and the present social discords.

Unfortunately, due to the impressive focus on Kentridge works, the rest of the festival lost some of its impact. En avant, marche!, a co-operation by the celebrated choreographer Alain Platel with his director Frank von Laecke and the composer Steven Prengels, stood out despite the competition. It follows the last attempts of a cancer-ridden trombone player (a wonderful Wim Opbrouck) to make music. It is tragic-comic music and dance indulgence, led by the brass band Zentralkapelle Berlin.

But often, there was so much action on location that one had to make a real effort to find, for example, Dries Verhoeven's Guilty Landscapes, episode II or to have time for Nelisiwe Xaba's Urban mermaid or Mary Reid Kelley's This is Offa, a perfomance that has internal organs do the talking. All three works were part of Uncertain Places, the daily night exhibitions after 10 pm.

The final big show, Forced Entertainment's From the Dark, was an all night performance that had the performers elaborate on the theme of fear. As this usually goes, the party sensibility of the youngish audience drifted more and more into boredom, despite the use of exotic costumes and allusions to the dangers of the recent Brexit (the British vote to leave the European Union) and terror attacks.

Whether one liked the turbulence of the festival or not, it exemplified a grandiose attempt to break boundaries of theater festivals, bring foreign approaches into the fold, and integrate the audience into the spectacle as it was custom in Greek and Roman times – except that at Foreign Affairs the established notions of time were challenged. For von Hartz, the festival was "an attempt to address political issues and social phenomena of international relevance." All of the above was accomplished. Too bad that Foreign Affairs must now to be ranked as historic.