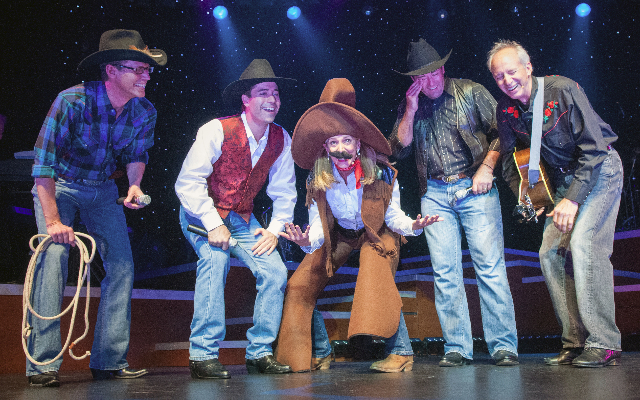 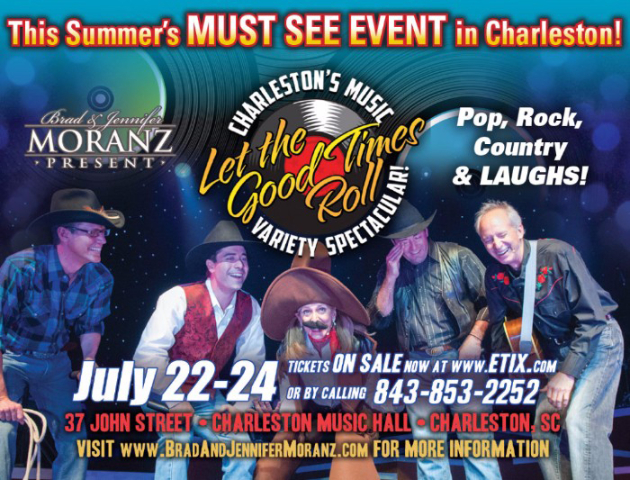 Brad and Jennifer Moranz presented Charleston's summer musical variety spectacular full of pop, country, rock and some real belly-laugh comic relief. The Moranz dynamic duo have been providing first class entertainment for the past 21 years. They have proven time and time again that Charleston has talent. Brad told the audience that he felt that this production with talented singers, dancers and musicians was the best ever to be in his productions at Charleston's Music Hall.

They are Charleston's own George Burns and Gracie Allan giving the comic relief throughout the show with clever skits.

When Michael Minor sang his rendition of "Rhinestone Cowboy" he hit the ball out of the park. Glen Campbell would have been proud. Then he turned in his cowboy outfit for a  hot red dress to lead the Tina Turner number for "Rollin' Down the River."

Tim McManus thrilled us with "Can't Take My Eyes Off You" and "Somebody to Love."

The fourteen-year-old singer sensation Kindred Moore was elegantly dressed in an appropriate gown as she sang a song from "The Little Mermaid."

Garth Brooks' singing style was showcased by Garrett Graham for "Stand Outside the Fire."

Tiffany Park captured the jazz of Duke Ellington with pizzazz. "It  Don't Mean A Thing"  became a production number when the dancers did their tap dance routine to the music of Ellington with energy to spare. The kid dancers Lexi Spooner and Graceyn Brown kept up with the adult dancers: Monica Fabunan, Shannon Howard, Tori Ward, Georgia Anderson and James Jiang who had a featured routine of his own.

One of the crown jewels of the show was Lakieta Bagwell-Graves extraordinary singing ability. She tackled a song from one of today's favorite singers Adele with "Hello" that grabbed your soul.

Rodney Archie had the most compatible voice to do a few duets with Graves that included "Hello." His choir background showed glowingly.

"Dancing in the Streets" and "Imagine" brought the spotlight on Tomika Peoples' talent.

A real musical treat came when violinist/fiddler Frances Hsiel rose from the bottom of the stage and captured the audience with her performance.

Taking center stage was guitarist Miley with a blow-you-away version of  "Mission Impossible!"

The costumes were a fashion show. Each creation was coordinated perfectly for the song> Bravo to JMO designs.

Brad and Jennifer Moranz should continue producing, directing and choreographing under the fabulous musical director Wilson for another 21 years.