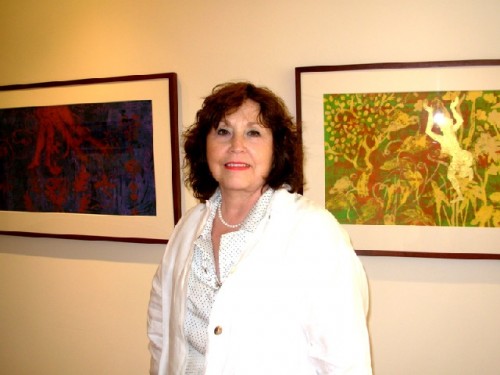 Kay WalkingStick with two of her works. Giuliano photos.

Danae and Arizona by WalkingsSick (not in this exhibition). 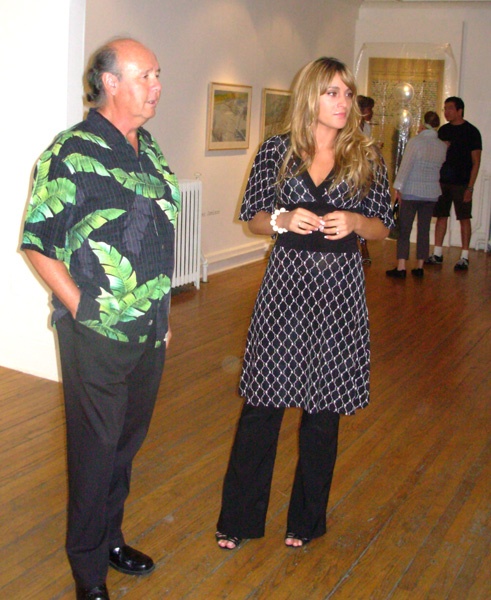 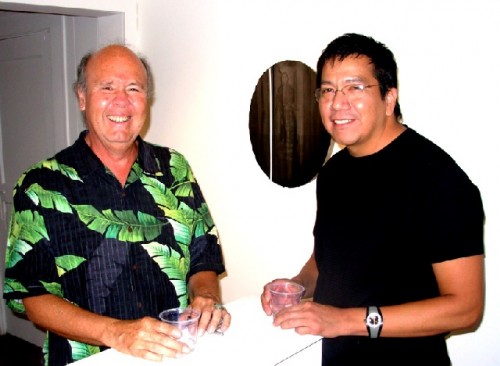 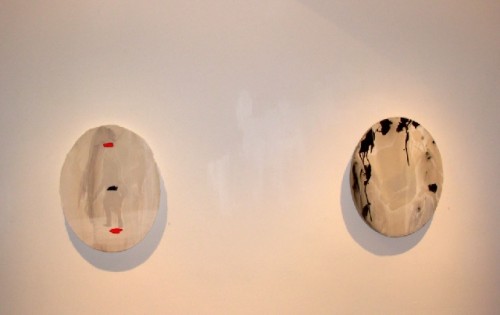 Two of Slick's paintings in this show. 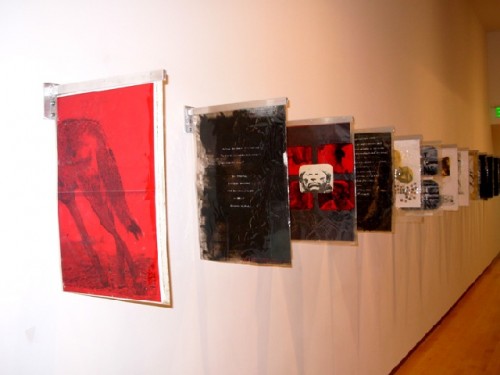 A Slick book as installed in No Reservations at the Aldrich Museum. 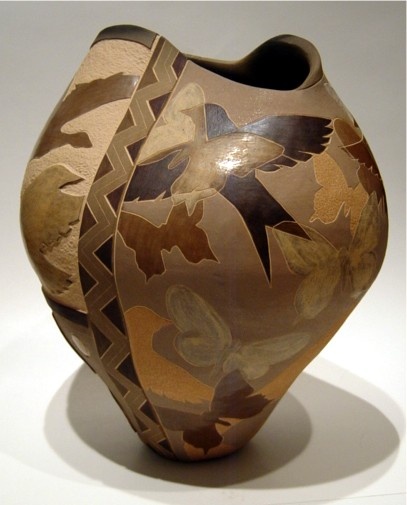 A pot by Susan Folwell (not in this exhibition). 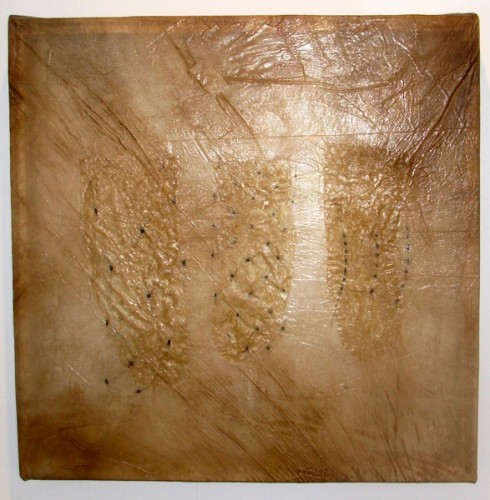 A small work by the Alaska based artist Sonya Kelliher-Combs. 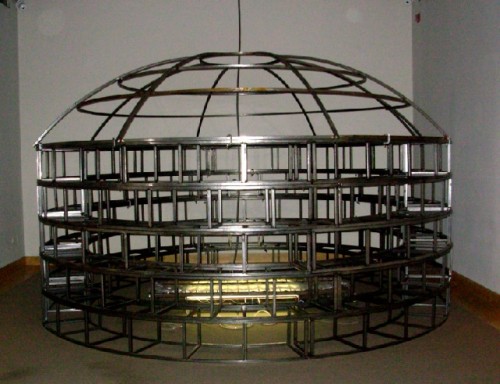 A large sculpture by Will Wilson in his show at NMAI.

A work by Lorenzo Clayton in the Fiacco Gallery. 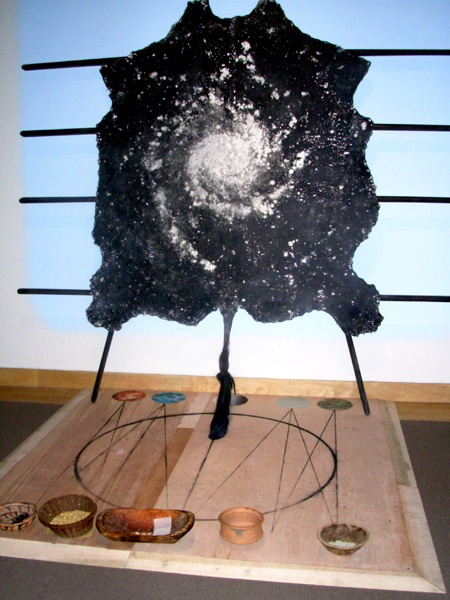 Work by Clayton in his NMAI exhibition. 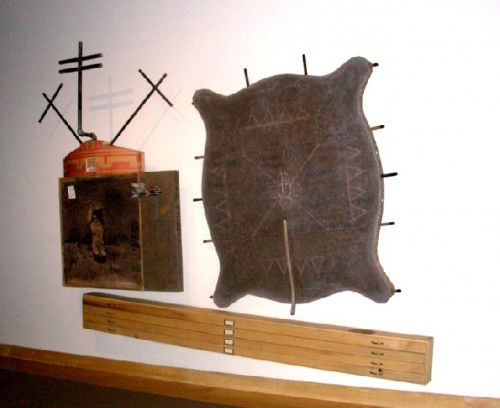 Another work by Clayton at the NMAI exhibition. 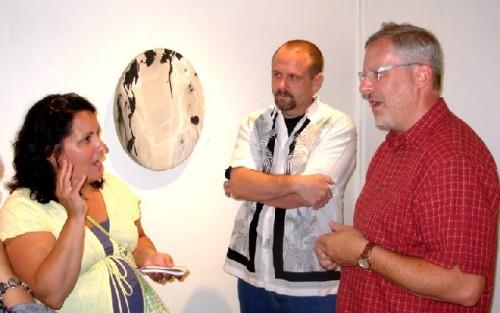 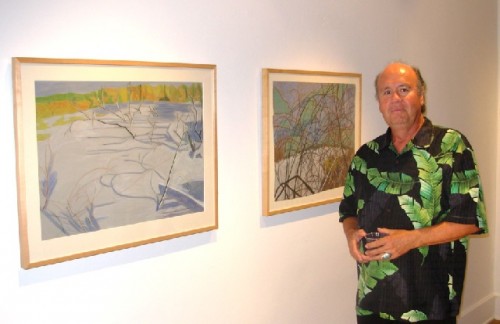 Peter Jemison and his landscapes.

A link for the Indian Arts and Craft Act.
http://www.artnatam.com/law.html

In no other contemporary art markets other than Indigenous ones do governments regulate art and identity together. In the United States, the Indian Arts and Crafts Act of 1990 attempts to qualify art by ethnicity and ethnicity by art. Consequently, serious artists of Native American descent must contend with false boundaries of culture, market and law that are irrelevant to their work and their person. For artists, the difference between "Native American Artist" and artist who happens to be Native American is of great significance and can mean the difference between having to recapitulate an imposed 'identity' versus the type of self-actualization that artists are especially entitled to.

The artists selected for this exhibition directly and indirectly respond against the notion that 'identity' is singular and that their artwork must comply with stereotypical and legal definitions of "Native American Art". The works selected may or may not directly reference 'identity'. In every case, the reference is on the artists' terms, not the terms of a nostalgic culture or viewer." Gallery statement.

Recently I received an e mail from the artist Peter Jemison, the director of Ganondagon, the Seneca site in Victor, New York just outside of Rochester. Last summer Astrid and I attended the weekend long festival and a report is archived under the Berkshire Fine Arts travel section. We also visited with Peter in his several studios and there is a profile  in our People section. We have known each other off and on since the 1960s and became reacquainted a few years back when I became involved with research on contemporary Native American Art.

He invited us to attend the opening of an exhibition "Postidentity" at the Nicole Fiacco Gallery in Hudson, New York. Yesterday we took him up on the offer and enjoyed an hour and a half drive through beautiful rural New York State. Recently a friend had been living in Hudson and described it as a beautiful and lively arts community. So it had been on our to do list and this provided just the right occasion. There was also the incentive to meet with Duane Slick, a professor at the Rhode Island School of Design, whose studio I had visited and written about. As well as  meet Kay WalkingStick. There had been several attempts to see her in New York but we never managed to connect.

Also I have been in touch with Laura Thompson the director of education for Mass MoCA who is the process of working on a Native American art project for the North Adams based museum. When she contacted me for information I put her in touch with Stuart Chase of the Berkshire Museum in Pittsfield. He was formerly director of the Rockwell Museum in Corning, New York which we visited last summer. The museum is known for its historic and contemporary collection of Western and Native American art. Even before that his interest in the field dates back to the 1980s. The Berkshire Museum has a collection of historic materials and Chase has plans for related exhibitions.

So there was the opportunity for networking which will hopefully lead to further projects and exhibitions. It was intriguing that Hudson would be the location for this informal gathering of artists and curators. We arrived early and had a chance to talk with the Nicole Fiacco. This is her fifth season and for a variety of reasons she started the gallery with a mandate to show Native American crafts. Gradually her interest expanded to handling fine arts but for business reasons her roster of about fifteen artist includes non Natives as well. Outside of Santa Fe there does not appear to be a single gallery that can survive by showing exclusively Native American art. Many years ago Lloyd Oxendine, who recently won a Pollock/ Krasner Foundation grant, for a time tried that in New York. It was while volunteering for Oxendine's gallery that Jemison first gained curatorial experience.

Last summer, the Aldrich Museum in Ridgefield, Connecticut presented No Reservations: Native American History and Culture in Contemporary Art curated by Richard Klein. That exhibition, which was reviewed for BFA, set a precedent by combining Native and Non Native artists. It was innovative for exploring both issues of culture and identity with Native culture as well as responses and reactions to it. Many Native artists whom I have interacted with have expressed that they really prefer to be viewed as artists first and Native artists second. There is the problem of being confined and ghettoized into Native shows. This is a particular concern when the curators, writers and institutions are non Native with risks of misinterpretation of a particularly complex history and culture. The deceased attorney, activist and author, Vine Deloria, Jr., was brilliantly witty and insightful on that conundrum especially in regard to the sociologists, anthropologists and archaeologists who study Native history and culture.

The issues are so layered and complex that on many levels there has been a slow and daunting process for Native art to be accepted into the mainstream of the art world. Recently, there was a feature article on the subject for Art News. This was widely viewed as an important breakthrough but the range and depth of the piece, while encouraging, was narrow in its focus and depth. It concentrated primarily on younger artists and their potential to break out as art stars. This appears to be the normal process of the art world, to skim off what drives the market, and then gloss over and largely ignore a history which reaches back over generations. There was little or no sense of  that history in the Art News article and the notion that these new hot artists were just spawned full blown as if from the forehead of  Zeus.

It was particularly poignant and insightful to connect with Kay WalkingStick as she is arguably among the few widely known artists of her generation. Others would be Jaune Quick to See Smith, Jemison, Oxendine,  Jimi Durham, and George Longfish. In November WalkingStick will open a show of several new works at June Kelly in New York. We plan to meet then and discuss the work. Here she showed one of her signature diptychs which combine a South Western view of landscape with a poignant line drawing of a female figure seemingly uncomfortably navigating a confining space.

Slick is represented in this exhibition by three, small, oval paintings. One is a study in greys and the others are dominantly white toned and typically complex and layered. Looking carefully one sees the subtle shadow of embedded figures, silhouettes, as Native themed signifiers. In the No Reservations show the curator took apart one of his books and mounted it as a series of small projecting panels so the book took on a relief and sculptural entity.

Jemison is represented by two works on paper depicting the winter landscapes he observes and is inspired by in Victor. He has talked a lot of the spirituality of the land as a Native aspect of the work. He also makes inventive and funky series of bags  (not included here) where he paints images on common brown paper bags which he treats with preservatives. The bag pieces are widely represented in collections.

We asked him about progress in fund raising for building a visitors' center at Ganondagon which will include a permanent collection, galleries for temporary exhibitions, performance and education spaces. Last summer he stated a target of $9 million and has already raised more than $10 million and now would like to reach a goal of some $15 million. The added funds would largely go toward endowment and programming. There have been meetings with designers and architects involving a lot of steps toward ground breaking in a couple of years. We asked him to keep in touch and update us on progress.

Two of the artists with works in this exhibition were familiar from major installations in New York at the National Museum of the American Indian a branch of the Smithsonian. Will Wilson, an artist from Arizona, is represented here by three photographic panoramas with himself as protagonist set against the vast Southwestern landscape. One image presented a double head shot of the artist seemingly smeared with toxic material and breathing through a gas mask. The work touches on the significance of sacred land and its violations by Non Natives. Lorenzo Clayton is represented here by a large vertical piece that combines several elements. There is a "canvas" with text onto which are attached metal bowl like forms and over that is a scrim of clear plastic fixed to hang down the length of the piece attached by grommets to the wall above. At NMAI he showed a series of  large collages and assemblages.

In this show is a single piece by the Alaska based artist Sonya Kelliher-Combs. The smallish, square work is hung like a painting but in color, material and texture is made to look like translucent, stretched skin. Onto this surface are three, delicately handled elements of stitching that imply ritual and shamanism. The notion of the sacred and secretive is a theme that one often encounters in Native culture. There is an ongoing conflict about what may be revealed to outsiders and artists are often dealing with ways to represent their religion and culture without betraying it. It is the last precious entity that Natives keep to themselves.

Fiacco has included a single ceramic piece by the distinguished potter Susan Folwell. The achievement of Native crafts has long been acknowledged. And there is a strong market for the best historic and contemporary examples.  There are numerous galleries that thrive on presenting this material. It is much to Fiacco's credit that she seeks out the very best examples and has expanded her mandate to the much more challenging arena of contemporary Native Fine Art. Surely we will return to Hudson as she continues to mount challenging and insightful exhibitions such as this.