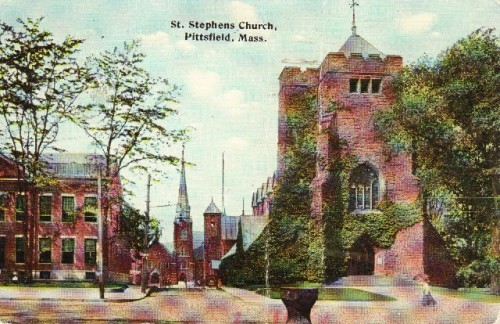 A vintage post card of St. Stephen’s in Pittsfield. 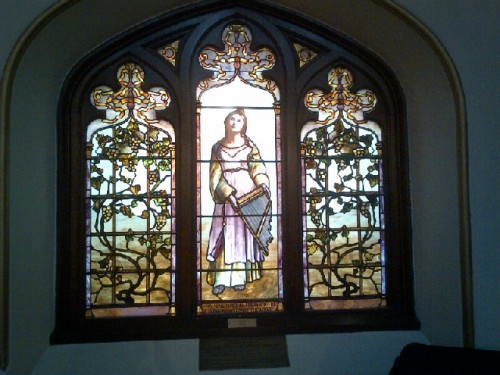 St. Cecelia is the patron saint of music depicted in a window by Tiffany. 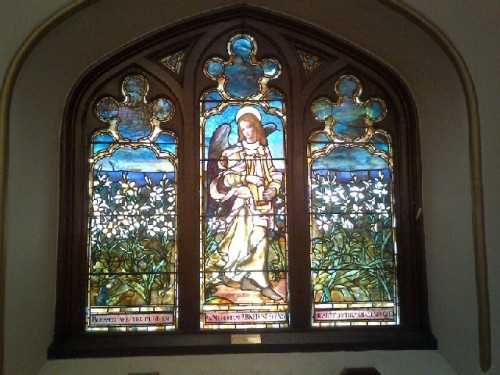 Louis Comfort Tiffany (1848 – 1933) was renowned for elaborate church windows. There are stunning examples of his work in the Berkshires at Saint Stephen’s Episcopal Church in Pittsfield, Ma. (Park Square, 67 East Street).

Tiffany was an American artist and designer who worked in the decorative arts and is best known for his work in stained glass. He is the American artist most associated with the Art Nouveau and Aesthetic movements. Tiffany was affiliated with a prestigious collaborative of designers known as the Associated Artists, which included Lockwood de Forest, Candace Wheeler and Samuel Colman. In addition to designing stained glass windows and lamps, Tiffany designed glass mosaics, blown glass, ceramics, jewelry, enamels and metalwork. He used opalescent glass in a variety of colors and textures to create a unique style of stained glass.

Another artist in Saint Stephen’s is Mary Elizabeth Tillinghast. She studied stained glass in Paris under Carolus-Duran and Henner. Tillinghast established herself in New York in 1882 and received a gold medal at the Chicago Exposition in 1893 and gold and bronze medals at the Charleston Exposition in 1902. She was the first to realize the difference that the electric lighting of churches would make in the effect of window designs.

Before discussing the windows in Saint Stephen’s, a few words about the church itself. An Episcopalian congregation was formed in 1830 by Edward A. Newton in Pomeroy’s Coffee House on Park Square with about 3500 people. Park Square was dominated by the famous Elm Tree which survived until 1864 and a congregational church was designed by Charles Bullfinch. In 1832, a beautiful stone Gothic structure, Saint Stephen’s Church, was completed along with a new Town Hall, which still exists.

In 1889 the stone Gothic church was demolished to make room for a larger church. In addition to the stained glass windows, Saint Stephen’s has the Austin Organ, Opus 275, given in 1910. This organ is positioned above the altar and provides great music and beauty, along with the fine choir, to the Sunday services. High above the choir are twelve windows displaying the traditional symbols of the Apostles.

The Altar Rail was designed by Tillinghast and is an interpretation of a choir rail in the Cathedral of Siena, Italy. The classic egg-and-dart design and acanthus leaf carving show up brilliantly against the Italian marble floor. The Pulpit was also designed by Tillinghast and built of English oak. Unique in the Episcopal Church is Saint Stephen’s Bishops’ Gallery, high above the Nave. The windows honor twelve bishops who have had some connection with Western Massachusetts. The Fifth Bishop of the Diocese, Alexander Doig Stewart, originated this project.

With the exception of the sanctuary windows, the stained glass windows were commissioned either from the Tiffany Glass Company of New York or Mary Tillinghast, who had been a pupil and partner of the master of American glass John La Farge. All were created and installed in the late 1890s. They were removed, restored and reinstalled in June 2000 by Serpentino Stained & Leaded Glass, Inc., of Needham, Ma.

A stunning window is Tiffany’s "Resurrection Angel." This window exhibits the layered ‘drapery’ glass and opalescence typical of Tiffany. Painting on the face and hair is very refined. And the lilies catch the light, with their chunks of glass.

Subtle coloration and more luminescence can be seen in "Cross and Doves" by Tiffany. The restrained painting on the wings of the doves, symbolizing the Holy Ghost and the brightness emanating from the Cross are magical.

"The Presentation in the Temple" by Tillinghast tells the story of bringing Jesus to the Temple to be dedicated to God. Simeon had been promised that he would not die until he had seen the Messiah. Recognizing in Jesus the promised Messiah, Simeon uttered the beautiful song, Nunc Dimittis, “ Lord, now let they servant depart in peace.”

You can see that Tillinghast has a different technique than Tiffany, using more primary colors and darker hues.

Another beautiful window is the one depicting "St. Cecilia" by Tiffany. She is one of the most honored martyrs of the early Church, and is the patron saint of church music. St. Cecilia is usually shown with a musical instrument, and here she has one as well. She is dressed in a light pink gown against a paler pink background and the side panels have lovely vines. The whole window has a golden glow from the colors used for the ground and the intricate work done on the top of each panel. This is an unusually bright and light stained glass window, very delicate and focused on one figure.

"Suffer the Little Children" is a charming window by Tiffany, with Jesus in the center holding a cherubic baby. The side panels each have two children, looking at Jesus and reaching out to Him. The painting on this is very skillful, especially on the faces, hair and clothing. The glass is darker in this one than some of the other Tiffany works, but it is layered and opalescent.

In addition to the many stained glass windows at Saint Stephen’s, Tiffany created the baptismal font which can be found at the head of the aisle after you enter the Church. It was restored in the 1984 renovation of the Church and was moved to this traditional position as a symbol that Baptism is the entrance to the Christian life.

There are more beautiful works of art at Saint Stephen’s to discover. Truly it is among the lesser known treasures of the Berkshires.