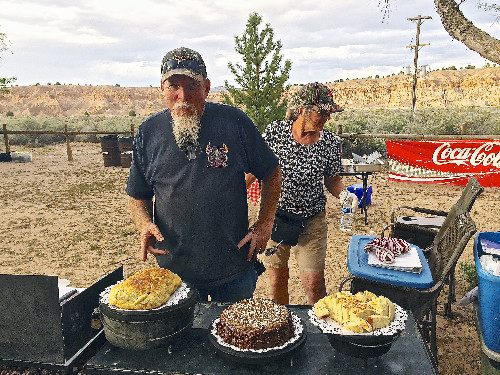 Dutch oven cooking, popular since colonial times, came to Nevada with the early Mormon settlers of the area and remains a way of life even today. Nevada state parks regularly give demonstrations of how to cook with the short-legged, cast iron vessel with the rimmed lid. (Coals are put both underneath and on top of the pot.)

The state’s annual Dutch oven cook-off at Cathedral Gorge State Park near the Mormon-founded town of Panuca is a showcase for the artisans of this culinary specialty. At the Sept. 2014 event, seventeen cooks prepared 36 dishes in five categories: Side Dish/Vegetable; Main Dish/Meat; Bread; Dessert; and the special category of “1860s,” commemorating Nevada’s 150th anniversary, in which contestants cooked a dish that would have been made in the 1860s, all from scratch.

Four judges sampled and ranked the dishes on Appearance, Execution of Recipe, Taste and Overall Appeal. It was such a privilege to be asked to judge the dutch oven cookoff finals.  One of the judges was Pam Robinson, Chief of Staff for Nevada’s Lieutenant Governor Brian Krolicki. Robinson said, “The food was awesome and after tasting over 35 dishes -- I was stuffed!  I'm so proud of our State Parks for coming up with such a fun way to celebrate Nevada's 150th birthday and in such a beautiful setting.”

Once the judging was completed, it was share and share alike as the 300 people in attendance lined up to try the savory fare, which included category prize-winners Chicken Chili Rellanoes, Smokey Bacon Mac and Cheese, Cinnamon Rolls, German Chocolate Cake and Stuffed Pepper Stew.

Dessert category winner Bobby Cason said, “Cooking in Dutch Ovens is a great way to make wonderful food and friends while camping. The Cathedral Gorge cook-off was a great event to cook at. We started cooking about noon and first turn in was 5 p.m. Cooking 3 dishes, it takes all that time to get them mixed, cooked and plated ready for judging. We made Parmesan Garlic Bread, Bacon-Puff Pastry Wrapped Meatloaf, and German Chocolate Cake. Cooking with coals is an easy technique to learn how to do. We had a great time, made new friends and had the experience we will never forget. We will be looking forward to going back again next year.”

WANT TO GIVE DUTCH OVEN COOKING A TRY?

These cookbooks give novices a start in the right direction: 101 Things to do with a Dutch Oven by Vernon Winterton; Dutch Oven Cookout, Step by Step by Michele Pika Nielson; and Dutch Oven Cooking by John G. Ragsdale.

Dutch Oven competition winner Bobby Cason gave this tip: “You can start off with the size of the oven double that for # of coals and remove 3 from bottom and add them to top so if you are cooking with a 12 you put 9 coals on bottom and 15 on top for 350* of course if the wind is high or, if cold, you will have to adjust and add more coals. Practice is the best way to learn how to master the Dutch oven cooking. Some of the greatest dishes come out of experiments you have tried.”

If I'm an advocate for anything, it's to move. As far as you can, as much as you can. Across the ocean, or simply across the river. The extent to which you can walk in someone else's shoes or at least eat their food, it's a plus for everybody. Open your mind, get up off the couch, move. Anthony Bourdain.

Here is a recipe.

Preheat oven to 350 degrees. Grease 10’’ Dutch Oven (DO). Sift together the flour, baking soda, and salt. Set aside. In a small DO, heat water and 4 oz. chocolate until melted. Remove from heat and allow to cool. In large bowl cream 1 cup of butter and 2 cups of sugar until light and fluffy. Beat 4 egg yolks one at a time. Blend in the melted chocolate mixture and vanilla. Beat in flour mixture alternately with the buttermilk, mixing until incorporated.

In large bowl, beat egg whites until stiff peaks form. Fold 1/3 of the whites into batter, then quickly fold in remaining whites until no streaks remain.

Spread filling between layers and on top of cake. In a small DO, melt shortening and 1 ounce of chocolate. Stir until smooth and drizzle down the sides of the cake.