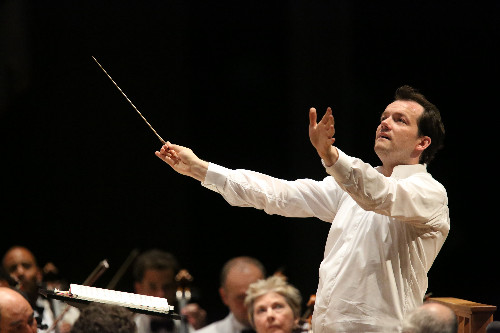 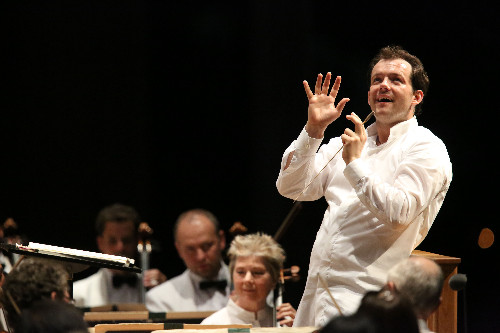 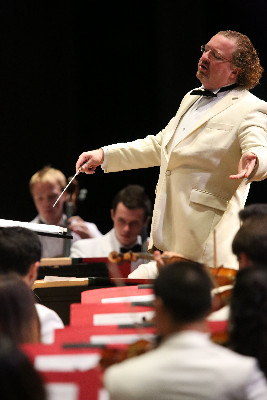 The annual Tanglewood On Parade festival that runs all day culminated last night with a concert in the Shed with fireworks following a massive performance of the 1812 Overture.

For many years John Williams, who resides in LA, has been a fixture in this gala concert.

Before performing three compositions by Williams with a thick and charming accent the conductor, Stéphane Denève, leaning forward with great emphasis informed the capacity audience in Shed and on the lawn that “I Adore John Williams.”

During his part of the evening Pops conductor, Keith Lockhart, informed the audience that Williams is recovering from a back injury. He has been instructed to rest and not travel for several weeks. That means that he missed not only last night’s concert but is a scratch from the ever popular Film Night.

Lockhart expressed all of our wishes for a speedy recovery with hopes that he will conduct next year at Tanglewood. Then with a bit of wit he introduced a young man making his debut with the Boston Pops, Andris Nelsons.

Earlier in the week the BSO announced an extension of Nelsons' contract through 2022. There has been media speculation that Nelsons, young and brilliant, indeed one of the brightest stars in the world of global classical music, might be lured away by a major European orchestra.

Barring the series of injuries that plagued the tenure of James Levine, last night, should there by any doubt, Nelsons displayed the finesse and charisma confirming that the venerable BSO is back on track for years to come.

While he did not speak directly with the audience as did the other two conductors, has been described as shy and not in command addressing audiences, with every bone in his nubile and expressive body he demonstrated why actions are louder than words.

It is fascinating to observe his balletic movements and hear the sublime music that is evoked from gestures of the baton.

This was immediately evident in his explicit rendering of Roman Carnival by Berlioz. It is a work that conjures images through  music of the textures and sight of that colorful event. However briefly one felt unique feeling and the compelling bond between conductor and orchestra.

The mood of Ravel’s Pavane for a Dead Princess expressed soft and seductive tonalities. One felt the impressionism of the music. That mood was extended to the first of two pieces by Shostakovich Romance from The Gadfly. The second, Galop from Cheryomushki, was astonishingly percussive and crisp. The baton morphed into a whip driving the orchestra to a crashing finish.

It has been reported that the Latvian born conductor has a particular interest in presenting the work of Shostakovich. So this popular concert was a nice means of introducing the Tanglewood audience to a lively sample of his music. It made one eager to hear more.

The three works by Williams comprised a suitable salute from Denève. Like Nelsons he is a very physical conductor. Particularly moving was the solo violin of Tamara Mirnova in the Williams Violin Concerto: II. The conductor told us that the piece was written in memory of the composer’s wife.

During a spring concert of Pops at Symphony Hall we had heard Lockhart’s tribute to Old Blue Eyes who was born a century ago in Hoboken, New Jersey. It was nice to enjoy it again.

Subbing for Williams we experienced Nelsons in a different and more sweeping take on excerpts from the score of the film Star Wars.

Yet again Tanglewood On Parade ended with a barn burner the 1812 Overture and fireworks to punctuate the canons. Nelsons presided over the combined BSO and TMC orchestras.

The opening section featured a massive rendering of the cello section. This was matched only by the immensity of the violin and viola parts. There were accents from the percussion section including the sound of the church bells of Moscow celebrating victory over Napoleon. With so many musicians crowding the stage it was absorbing to witness how Nelsons brought them together so cohesively.

It will be a long time before one hears a better or more emotionally rousing rendering of that beloved composition.

We made our way to the car with explosions above as well as in our hearts and minds.