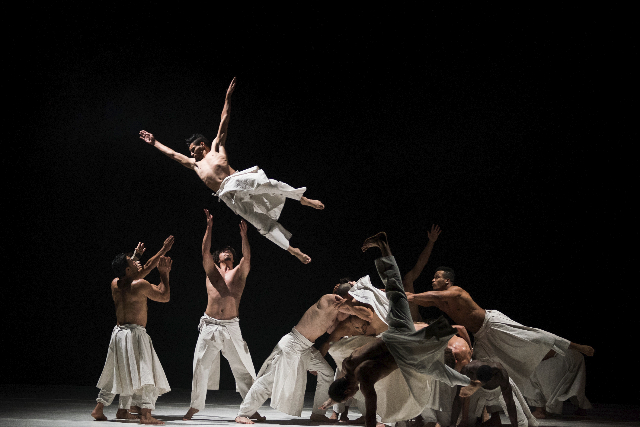 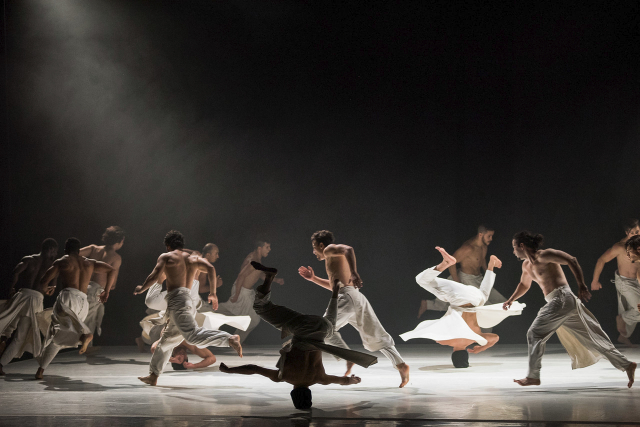 The seventeen male dancers form a cluster on the floor of the dimly lit stage. In the lighting design of Lionel Buzonie there is a dawn-like circle of light. To the soft refrain of the oud the music slowly arouses the men. They begin to stir and move as though coming awake.

At the end of the hour long piece Ce que le jour doit à la nuit (What the Day Owes the Night) choreographed by Herve Koubi the cycle of a single day finds closure in gradual darkening signifying night. The company is making its first appearance at Jacob's Pillow.

The events of this day are inspired by the novel and film of Yasmina Khadra about the childhood of Youne a young man growing up in the 1930s during the Algerian war for independence.

The work by the French born (Cannes) Koubi, who holds a doctorate in Pharmacology and Clinical Biology, represents a search for identity. As an adult he learned of his Algerian heritage.

That led him to live in Algeria absorbing the culture. Eventually he auditioned a number of street dancers to form a company. They are Algerian with two from Burkina Faso and one French dancer.

Primarily they are seen as a company with no particular emphasis on individuals as lead dancers and soloists. There was the pervasive sense of an ensemble.

On every level this is a dance of eclectic fusion. The music elides from Arabic oud and Sufi to classical including choral music from the Saint John Passion of Bach.

There is a similar mix in the dance which is choreographed in sweeping movements with elements derived from street dance, acrobatic back flips, gymnastics, head spins of b-boying, modern dance and ballet.

That’s a heady mélange which may be regarded as hypnotic and mesmerizing or repetitious.

There are spectacular elements. Initially, we are astonished when with the fluid ebb and flow of the dance there are exotic back flips, head spins, dancers flung into the air and caught by their companions. At times individuals run up a ladder of backs and then leap into space.

It is frustrating to search for  the thread suggested by Khadra’s novel. If this is a narrative work it is unclear what is being conveyed beyond an eclectic exoticism.

The chorographer has taken the moves and athleticism of street dancers, with no formal training and limited range, and folded them into the context of high art.

This is an approach that we have seen on a number of occasions at Pillow. There are many companies conflating raw energy with ethnicity of folk and hip hop style and elevating it to another level.

The company should be viewed through the lens of globalization. That requires a different mode for audiences as well as the approach of critical evaluation.

The resultant work, by definition created out of the mainstream, has to exist on its own terms. For this writer the evident and compelling athleticism, invention and spectacular moves of the dancers were tempered by the limits of form and invention.

Relatively early in this evening-long, single piece one came to anticipate what comes next. That felt more restive than hypnotic.