An Exciting Hands on Adventure 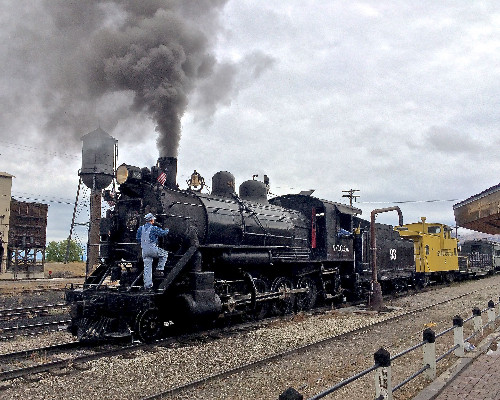 YOU’LL BE WORKIN’ ON THE RAILROAD: BE AN ENGINEER AT THE NEVADA NORTHERN RAILWAY MUSEUM IN ELY.

The biggest exhibits move at the Nevada Northern Railway Museum in Ely, where adventure awaits those who come to experience the golden age of 19th century railroading during Railroad Reality Week.

Participants can stay in a bunkhouse, work in the shop, and savor the dirt and the grime as they learn train operations. Students rotate through the positions of engineer, brakeman and switchman, becoming part of a cohesive crew that moves the rolling stock from track to track in the yard and then out onto the open rails. It’s a hands-on and intense immersion in what it takes to keep a railroad running.

Railroad Reality Week takes place at the Nevada Northern Railway Complex, the best preserved, least altered and most complete main yard remaining from the steam railroad era. The Complex was established in 1905 to support the Ely area’s then booming copper mining, and escaped modernization because of the cessation of mining operations and its geographical remoteness. The railyards were listed as a National Historic Landmark in 2006.

Mark S. Bassett, Executive Director of the Nevada Northern Railway Museum, said, “Nevada Northern Railway is the sole survivor from a grand era in western history. Now a National Historic Landmark, here time travel is possible. Here the steam locomotive still rules the rails. You can experience first-hand what it took to move a mountain of copper. In the shops, watch as century old techniques are still being used today. Climb aboard a steam-powered passenger train and experience travel from the last century. If you’re adventurous, you can Be The Engineer, your hand on the throttle. Or attend Railroad Reality Week and help run the railroad for a week.”

The Nevada Northern Railway Museum is located at 1100 Ave. “A” in Ely, NV. The Museum collection includes four steam locomotives, an electric locomotive, and several diesel-electric locomotives, as well as maintenance equipment and freight and passenger rail cars. The Museum also holds an extensive fleet of its original rolling stock, including passenger cars, wood-side box cars, ore cars, and work trains, all dating from the 1910s. It has the oldest operating tank car and the oldest operating coal-fired steam crane on any American railroad. In addition to Railway Reality Week, Museum activities include restoration and operation of historic railroad equipment, steam-powered excursions throughout the year, and handcar races. For more information, call 1-866-40STEAM or 1-866-407-8326, visit http://www.nnry.com or email info@nnry.com.

NEVADA RAILROADS IN CARSON CITY. The locomotives and cars of the renowned Virginia & Truckee Railroad, the Queen of the Short Lines, and other railroads of the Silver State are preserved at the Nevada State Railroad Museum in Carson City. Of the 65 locomotives and cars in the collection, 40 were built before 1900. Museum holdings include the extremely rare 1905 Virginia & Truckee McKeen Motor Car 22, a streamlined, 70-foot-long, gasoline-powered self-propelled passenger car with 33 distinctive porthole windows.

The restored McKeen, resembling a submarine on wheels, was designated a National Historic Landmark in 2012 and is the only one of its type that is operational. The Nevada State Railroad Museum is located at 2180 S. Carson St., Carson City, NV. For information, visit museums.nevadaculture.org or call 775-687-6953. Train rides from Carson City to Virginia City and from Virginia City to Gold Hill run from May to October. For information, visit http://www.virginiatruckee.com.

ENGINEER FOR AN HOUR AT BOULDER CITY, NV.

You can experience running a diesel-electric locomotive along the historic tracks of the Boulder Branch Line, used during the construction of the Hoover Dam in the 1930s.  You will be accompanied and instructed by a certified locomotive engineer.  The following locomotives are available: GE 80-Ton Diesel-Electric Locomotive #L-3; Locomotive EMC NW-2 #1000; Fairbanks Morse #1855; and EMD GP-30 #844. Requests to drive a specific locomotive will be accommodated when possible, although substitutions may be necessary.

"Once you have traveled, the voyage never ends, but is played out over and over again in the quietest chambers. The mind can never break off from the journey." Pat Conroy.