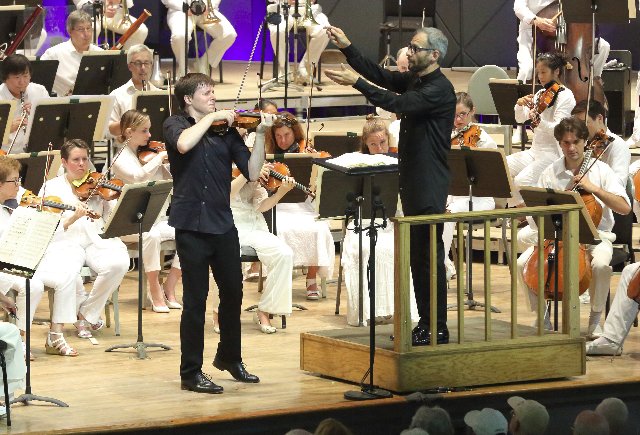 At fifty, with a baby face, a full head of hair and charismatic personality, Joshua Bell has it all. He was a child prodigy who followed his dream to adulthood.

Bell is loyal to his fan base that greets him annually at Tanglewoood.

His stellar performance in  Violin Concerto No.2 in D minor, Opus 22  stunned the audience with a  perfect rendition of this composition. With hair flying and a dramatic visual approach, the audience was mesmerized .

Arguably, Bell has moved into a new realm that other classical violinists admire.

The preceding selection, Polovstian Dances from ‘Prince Igor’ by Alexander Borodin provided a transition to the concerto. The audience certainly proved me wrong with their applause and upright standing positions. What was in-store was the tour de force that followed ‘Prince Igor.’

Conductor Dima Slobodeniouk made his debut leading the Boston Symphony Orchestra with Prokofiev’s Symphony No. 5 after conducting Borodin and Wieniawski’s Violin Concerto No.2 with Bell.

The conductor studied violin at the Central Music School in Moscow (his home). He studied under Zinaida Gilels and J. Chugajev, the Middle Finland Conservatory and the Sibelius Academy under Olga Parhomenko, Atso Almila, Lief Segerstam and Jorma Panula.