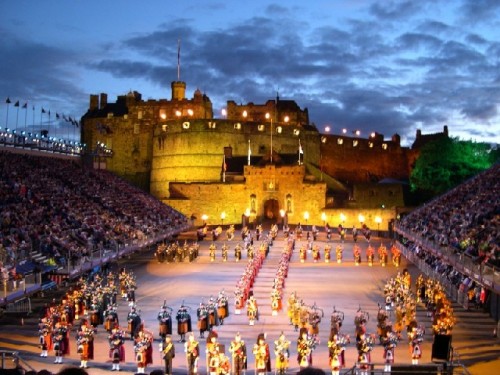 A concert with bagpipes. 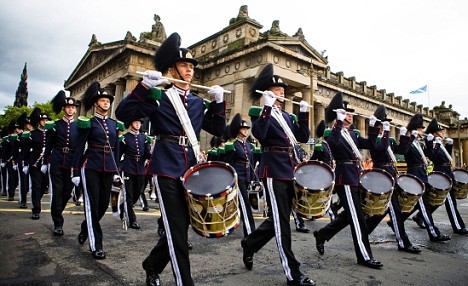 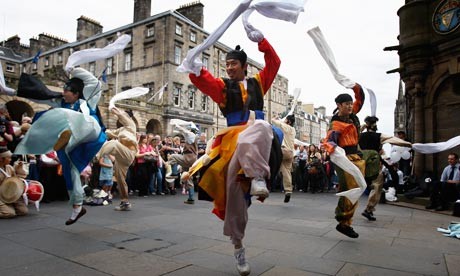 Fun in the streets. 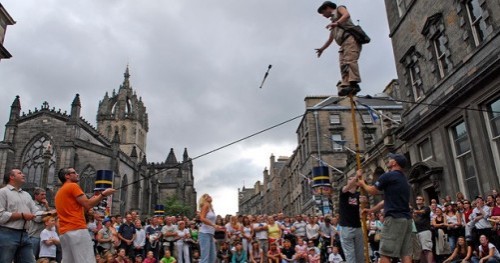 The entire city is the setting for the annual festival.

This year’s Edinburgh International Festival has captured the imagination of audiences from over 70 nations and looks set to break previous ticket sales records.

Opening this Friday, 8th August with the first of over 50 concerts starring the world’s finest musicians, the Festival will welcome audiences to the Royal Scottish National Orchestra conducted by Oliver Knussen and starring pianist Kirill Gerstein and soprano Claire Booth, and the Festival’s own performing ensemble the Edinburgh Festival Chorus at the Usher Hall.

The opening weekend sees over 13,000 ticket buyers flocking to world premieres and performances from some of the UK and the world’s finest artists across the city’s spectacular large venues.

Hot tickets over the opening week include Holst’s The Planets, Ladysmith Black Mambazo, The James Plays, Paul Lewis, Inala, Britten’s War Requiem, Ganesh Versus the Third Reich, Nicola Benedetti and friends at the Queen’s Hall and many of the Greyfriars concerts.

Scotland is boldly centre stage with The James Plays, an epic trilogy of history plays for Scotland from writer Rona Munro, which marks the first co-production between the National Theatre of Great Britain, the National Theatre of Scotland and the Edinburgh International Festival. This rich and turbulent period of history is played by a superb cast which includes Blythe Duff, Sofie Gråbøl, Gordon Kennedy, Mark Rowley and the three kings James McArdle, Andrew Rothney and Jamie Sives.

Audiences wanting to find themselves at the heart of the action during The James Plays can now book seats to sit on stage in the kings’ parliaments with a great view of the show for only £15.

Ladysmith Black Mambazo’s International Festival debut plays to a packed Playhouse on Saturday night with a concert of its signature style of singing, a mix of traditional Zulu and gospel music.

Opening on Sunday and playing till Tuesday, Ladysmith Black Mambazo performs the soundtrack it created with composer Ella Spira for the new ballet Inala, the brain child of the Sisters Grimm, premiering with current and former dancers from Rambert and The Royal Ballet choreographed by Mark Baldwin.

Tickets start at £6, £10 or £12 for many performances with 50% discounts available for young and senior citizens, Equity card holders, unemployed people, and Musician Union card holders.

Those lucky enough to be 26 or under have access to the best available tickets left on the day for £8.

Over 1,000 young musicians from Edinburgh and the Lothians are now signed up to access free tickets to our concerts with their Young Musicans Passport. Those that haven’t yet signed up can find details on www.eif.co.uk/ympassport

The Festival’s new digital partnership with Sinfini Music, Soundbites has created over 50 podcasts presented by Sara Mohr Pietsch which use samples of the music and interviews with artists to give explorers of the Festival’s music programme real insights into the concerts in Festival 2014. Subscribe to the podcasts on iTunes.

Also new in 2014, Guardian Classical at the Edinburgh International Festival is set to stream rehearsal sessions from the Festival with the Kronos Quartet, Collegium Vocale Gent, Hebrides Ensemble and Michael Houstoun on the Guardian’s website.

The Opening Day of Festival 2014 also sees the Festival’s artists performing and being interviewed across BBC Arts. A Culture Studio in front of an audience will be broadcast and streamed live from the Festival’s HQ The Hub on BBC Radio Scotland and the newly launched Edinburgh Festivals area of BBC Arts online. Friday 8th also sees Ladysmith Black Mambazo and Paco Pena appearing on Edinburgh Nights presented by Sue Perkins on BBC2 and The Art Show on BBC Radio 2.

The Festival runs until Sunday 31 August when it concludes with the spectacular Virgin Money Fireworks Concert, the largest fireworks concert in the world with over 400,000 fireworks fired from Edinburgh Castle to music performed by the Scottish Chamber Orchestra. Virgin Money recently signed up to continue as headline sponsors of the popular event until 2017.

Festival Director, Jonathan Mills said “It is with great delight that we open Festival 2014. Ticket sales are in great shape and we are busy finding even more seats in our biggest theatres to cope with demand for performances of The James Plays and Inala, and concerts including Paul Lewis at the Usher Hall. There’s been a terrific response to the programme.

“We have prepared for months to welcome the 2,400 artists coming from all corners of the globe to Edinburgh and it is terrific to see it all coming together, and to see first glimpses of world premieres which will thrill audiences from Edinburgh, Scotland and the world.

“It’s going to be a thrilling month of the very finest in the performing arts bringing us innovative, epic, intimate, moving and spine tingling performances. I for one cannot wait to welcome our audiences and our artists to the greatest Festival city in the world.”