Kander Ebb's The Visit at Williamstown 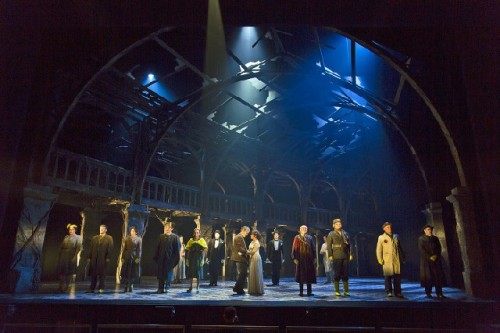 A magnificent set by Scott Pask. 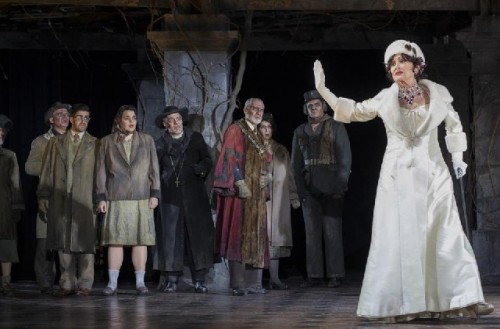 After many years the elderly billionaire make a surprise return to her childhood village. Paul Fox photo. 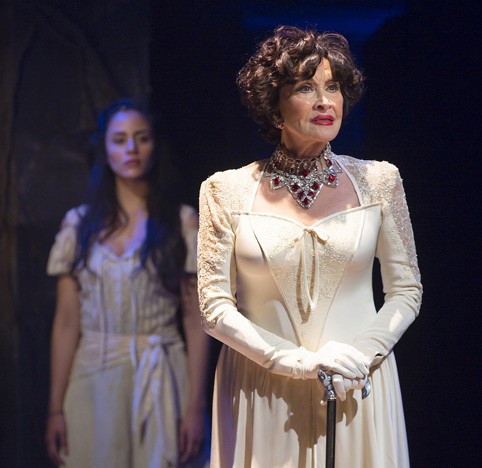 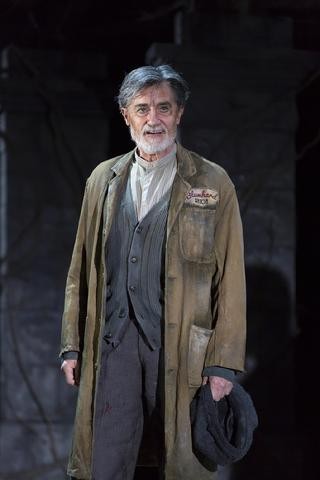 Roger Rees as Anton who wronged her. 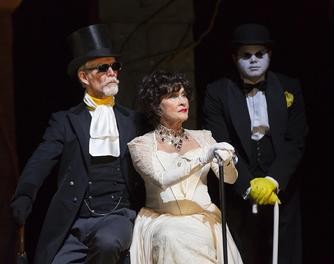 Claire and her entourage. 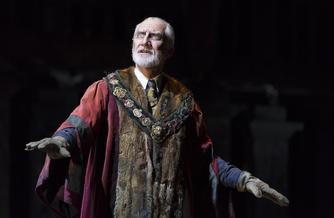 The Mayor is dazzled by her offer of a Billion marks as an endowment for the Village.

Luck be a lady tonight.

As they roll the bones the producers of the Williamstown Theatre Festival’s final John Kander and Fred Ebb musical The Visit are betting that three’s the charm.

Since it was first staged at the Goodman Theatre in Chicago just after 9/11 the project has been plagued with bad luck. Originally cast with Angela Lansbury in the lead roll of the billionaire Claire Zachanassian she was replaced by Chita Rivera. After Ebb died in 2004 it was restaged with Rivera for Washington's Signature Theatre in 2008. An attempt to bring it to New York’s Public Theatre fell through when investors withdrew.

Now the musical is getting a total overhaul at Williamstown. The book has been revised by Terrence McNally and under the sharp, deft direction of John Doyle stripped of extraneous characters and streamlined to one 95 minute act.

During a breakfast meeting with the media there were denials of plans beyond this summer production. Rivera, however, was candid in hoping for one more shot at Broadway with another Kander and Ebb musical to add to her portfolio of roles in Chicago and Kiss of the Spider Woman.

While WTF has pulled out all the stops in mounting a stunning production with many wonderful moments the odds of The Visit making it to Broadway, based on what we saw, are at this point heads or tails.

There are many fans of Rivera who would pony up Broadway prices for another opportunity to see the legendary performer in a signature role. For Berkshire audiences, while limited in vocal range and movement, she delivered a truly memorable performance. What a sublime treat to have a national treasure making her first WTF appearance.

For this production she was paired with Broadway veteran and long standing WTF actor/ director Roger Rees. He has returned for his 9th season in the Berkshires and first since his three year tenure as artistic director of the company.

Contemplating the dark and foreboding set by Scott Pask we anticipated a Brechtian turn on Friedrich Dürrenmat’s 1956 satirical play about greed and revenge Der Besuch der alten Dame. Now elderly and absurdly wealthy the grim set of a falling down railroad platform and shed is where the people of Brachen, an impoverished Germanic town, gather to greet its renowned former citizen.

Costume designer Ann Hould Ward has dressed the villagers in an assortment of rags. There are caricatured signifiers of their roles and professions from Mayor to school teacher, policeman and preacher. Their appearance is unkempt including dirty, unwashed faces. Brachen is a virtual ghost town on its last gasp.

In stunning contrast into this grim winter setting Claire, elegantly gowned in a white silk coat with fur trim and festoons of jewels, arrives with a small entourage. She is accompanied by the tall, thin, former judge, now butler Rudi (Tom Nelis). There are two blind eunuchs Louis Perch (Matthew Deming) and Jacob Chicken (Chris Newcomer). They have the whitened faces of mimes in formal black with accents of yellow gloves and platform shoes.

There is palpable audience excitement as Claire reveals how she managed to become so wealthy through a succession of husbands. “It’s really not a secret/ So I’m more than pleased to tell/ I married very often/ And I widowed very well’’ she sings deliciously in “I Walk Away.”

Late in life she has returned to the village which shunned and abused her as a child with a Gypsy mother and a Jewish father. They lived in a squalid Gypsy wagon outside of town and her parents were not even allowed to be married.

While bathing in a stream she encountered and was seduced by Anton Schell (Roger Rees). They were virgins when they became lovers. But when she became pregnant Anton told her to abort and stated that his friends would swear that she was the village tramp. Anton’s only hope was to marry Matilde (Judy Kuhn) and take over her father’s shop. That business has now failed. The community seems ravaged and cursed.

The village is stunned when she announces that she will endow it with a billion marks as well as a million marks for every man, woman and child.

With one condition; the death of Anton the former lover who betrayed her and forced her into the life of a whore.

Listening with remorse to her sad tale Anton sings “I Know Claire.” Primarily known for dramatic roles we were surprised to hear that Rees is an adequate if not compelling singer. Clearly he was cast for his dramatic skills which are formidable but in this performance overworked. He has the chops to project to the last row of the balcony in a large Broadway house. In the intimate setting of the Main Stage of Williamstown, however, his performance felt forced and artificial.

For every line Rees had a facial expression and body accent. While superbly crafted and skilled his role as former lover and father was never credible or compelling. With Rivera mostly regal and understated the balance and chemistry seemed askew with Rees forever over the top. It was exhausting to keep up with him.

Doyle introduced a brilliant device of shadowing the elderly former lovers with the constant presence of  Young Claire (Michelle Veintimilla) and Young Anton (John Bambery). These youngsters conveyed the love and passion that the pairing of Rivera and Rees failed to muster.

Once the intentionality and scheme for Claire’s revenge is established the musical became disjointed and episodic. Predictably, the villagers were outraged at her demand for the killing of Anton. With wit she described how that might be done in collusion of justice, cop and doctor signing a death certificate.

Initially, the villagers are outraged but come around to that compelling pot of gold. Including Anton’s wife and two children. Through this development Anton is oddly apathetic mostly directed as an observer of the inevitable.

There are some wonderful moments.

Against the advice of his wife Anton stocked the store with expensive yellow shoes. They have gathered dust because nobody can afford them. Now, anticipating a big payday with Anton’s funeral, the villagers are buying them on credit. The resultant song “Yellow Shoes,” with crisp and clever choreography by Graciela Daniele, is up there with the very best of Kander and Ebb. One might easily imagine it in the canon of great cabaret songs. It is a wise, tuneful and catchy conveyer of all consuming greed.

Quite hilariously the counter tenors, singing from a balcony in the station set, Deming and Newcomer in “Eunuch’s Testimony” reveal how they lost their jewels and went blind. For a bottle of schnapps they testified to having slept numerous times with Claire. She tracked them down and had them snipped in Patagonia. They have been tethered to her ever since.

It is a curious comment on this production and its casting that the most compelling song of the evening was sung by Jason Danieley as the schoolmaster, Friederich Kuhn. With the strongest and most heart wrenching voice of this musical he conveys that he was "The Only One” who dissented in the planned execution of Anton.

Of course the audience wanted to see Rivera, a famous hoofer of her era, dance. This was achieved with some whimsy in a duet with Young Claire “Love and Love Alone.” We have learned that Claire lost an arm as well as a leg in sundry accidents. So it is built into the character that she has limited movement. At times it seemed that Rivera's cane was more than a prop.

There are surprisingly flat intervals. A forced embrace between Anton and the daughter who for greed will soon betray him is an emotional dead end. As is a surprisingly enervating family outing “A Car Ride.”

Overall, Doyle has done a superb job of tightening up this superannuated musical. We were relieved that unlike his last WTF turn Ten Cents a Dance, which received both raves and pans, this time the actors weren’t lugging about their instruments. The superb ten piece band conducted by musical director David Loud remained in the pit.

When asked about this during the media breakfast Rees quipped that he was practicing playing trumpet. During face time with Doyle he conveyed that having actors play instruments is a tradition of British theatre. There is special training for that demanding form of performance.

Based on his Tony winning reworking of Sweeny Todd, as Doyle told me, he would be trying for something new and fresh with Kander and Ebb. For the most part he delivered with an inventive and feisty production.

Whether The Visit makes it to Broadway or Off Broadway, well, it’s a crap shoot.